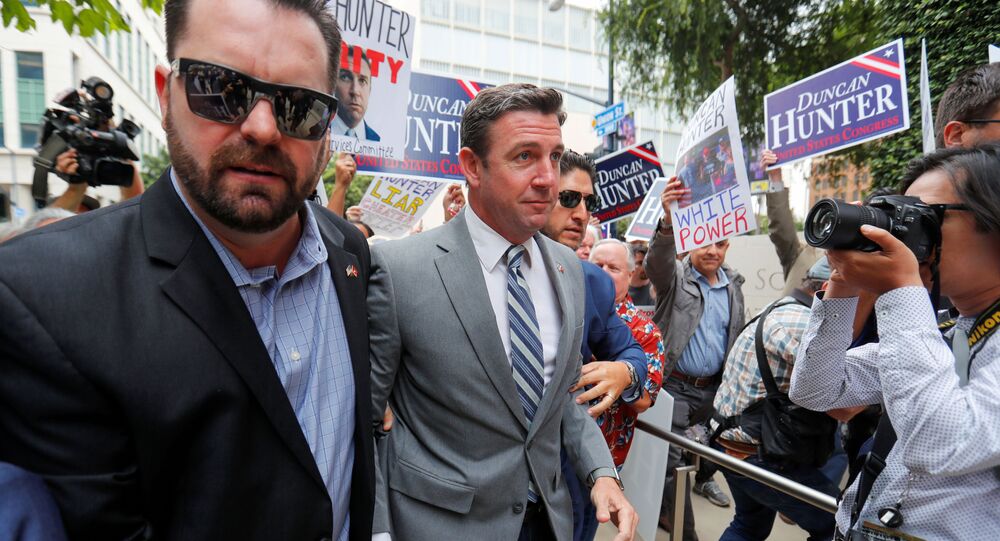 California Republican Duncan Hunter was indicted in August 2018 on charges of misusing at least $250,000 in campaign funds for personal use, including paying for numerous extramarital affairs, the purchase of private luxury trips, his family's dental work and his children's tuition.

Hunter said he will plead guilty on Tuesday to charges brought by the US Department of Justice (DoJ) after months of maintaining his innocence, as his wife and former campaign treasurer Margaret did earlier this year, The Hill reported.

"My trial was set for January 22; that's not going to happen now. Tomorrow, on Tuesday, I'm going to change my plea to guilty. I think it's important not to have a public trial for three reasons, and those three reasons are my kids [...] I think it's, it'd be really tough for them. It's hard enough being the kids of a public figure. I think it's time for them to live life outside the spotlight", Hunter said, cited by The Hill.

The embattled GOP lawmaker is accused by US investigators of spending large amounts of campaign cash on "fast food, movie tickets, golf outings, video games, coffee, groceries, home utilities, and expensive meals”, including the misuse of funds used to pay for five documented affairs with congressional staffers and lobbyists.

Hunter reportedly falsified campaign records filed to the Federal Election Commission (FEC) in an attempt to conceal the cash flow, claiming that the expenses were "'campaign travel', 'dinner with volunteers/contributors', 'toy drives', 'teacher/parent and supporter events', 'gift cards', for charitable donations, and 'gift basket items', among other false descriptions", The Hill said, cited by the DoJ.

The investigation into embezzlement by Hunter and his wife was reportedly kicked off after the House Ethics Committee uncovered that the GOP lawmaker spent some $600 to fly the family’s pet rabbit across the country, The Hill reported.

Following the indictment, Hunter was removed from committee assignments in the lower US chamber. Despite the reported allegations, however, the congressman - who was first elected in 2008 - managed to win re-election in the 2018 midterms.