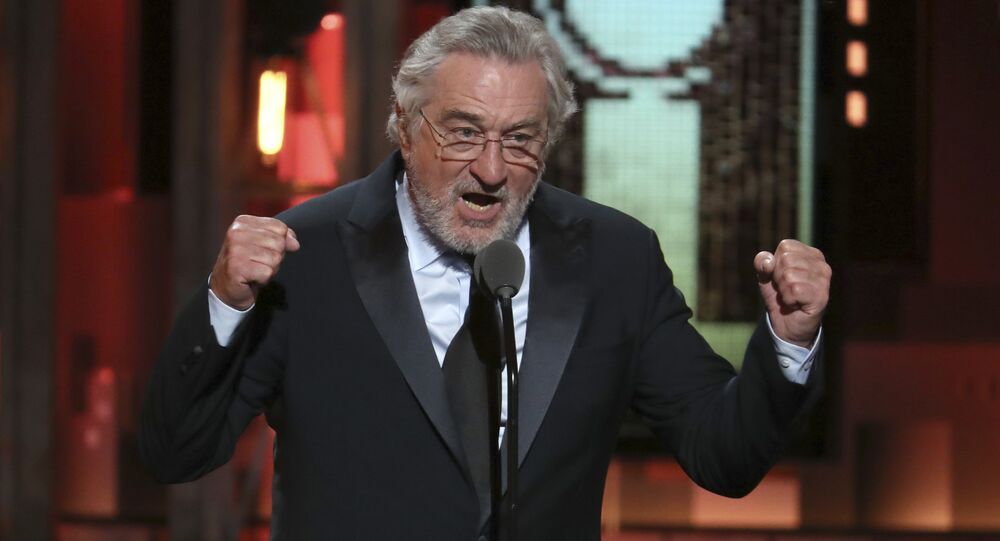 American-Italian actor Robert De Niro has never been a huge fan of Donald Trump, but this time he went on to speculate about which potential candidates could put up a hard fight against the US president in the upcoming presidential race.

Robert De Niro revealed his 2020 presidential election favourites, while branding incumbent US President Donald Trump “a piece of sh*t” and “a fool”, according to an interview with The Daily Beast.

“You have to make a decision, and Trump’s taken a lot of people down. He’s a piece of sh*t who never should have been there in the first place. It’s a joke. You look at this fool and you say, what’s happening?” De Niro said in the interview.

The actor then went on to reveal his presidential preferences in the upcoming election, suggesting that Pete Buttigieg, the Democratic mayor of South Bend, Indiana, could be a worthy opponent to the US president, but also praised Joe Biden.

“I like Buttigieg. Biden could get us into calmer waters, that would be a good thing. He means well, and to me, he’s a guy who would do the right thing, make the right decision. But Buttigieg I like a lot”, De Niro revealed. “He’s got all the credentials—Rhodes Scholar, Afghanistan veteran — even though he’s young, and if he could get a chance it could be something special, I think”.

The star of the newly released “The Irishman” movie also explained that the fact that the Democratic politician is homosexual may help him win support from “marginalised” sexual or ethnic groups.

“As a gay person, he’s someone who comes from a marginalized community, so people from other ethnic groups can identify with him, even if they’re not gay, because they know what it’s like. I think he’s the best for what we need now. I have friends who really like him a lot, as I do”, the actor added.

He also suggested that Buttigieg would be strong enough to withstand all the possible attacks against him due to his marginalised position, just like Barack Obama.

“With Obama, he had the middle name ‘Hussein’ and a lot of things that people tried to use against him—including Trump with the whole stupid ‘birther’ thing — and he went right through it. It could happen with Buttigieg. And there’s Bloomberg”, the actor said, while noting that former New York City Mayor Michael Bloomberg “can run the country as an adult”.

© AP Photo / Richard Shotwell
'Fake President': De Niro Says Trump Impeachment Shows POTUS 'Has to Be Held Accountable'
However, despite De Niro’s views, a recent poll from Quinnipiac University indicated that Buttigieg has “less than one percent” support among black voters in the state of South Carolina ahead of the Democratic primary in the state, in comparison to former US Vice President Joe Biden, who received 44 percent approval, and Sanders with 10 percent support among African-Americans.

The Oscar-winning American actor has repeatedly voiced his opposition to Donald Trump, slamming him as a “fake” president and calling for him to be impeached.