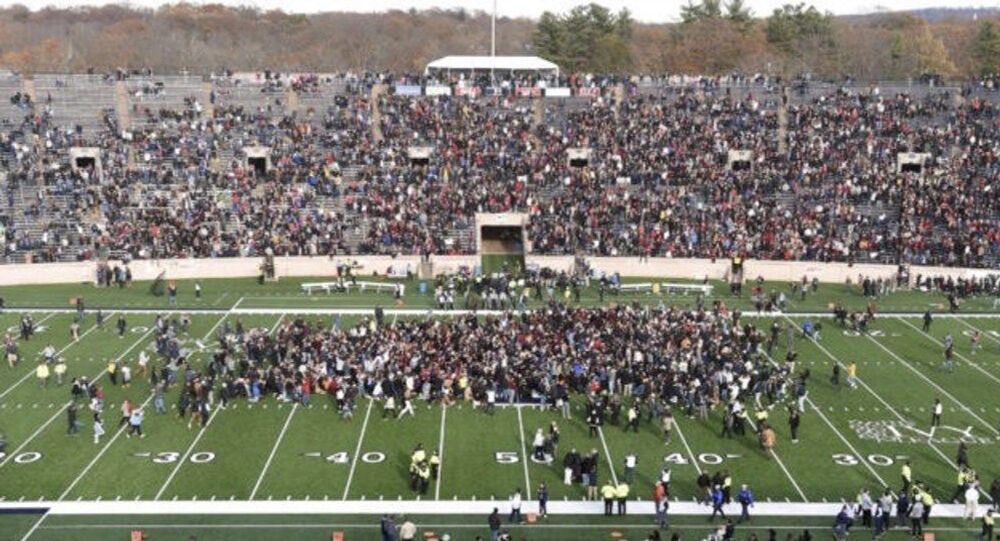 Dozens of people stormed the field during the halftime break at Saturday's annual football game between Harvard and Yale. Police first engaged in negotiations with the protesters, but later arrested the climate activists who reportedly indicated to law enforcement that they "want to be arrested."

On Saturday, students said to be from both Harvard and Yale universities staged a sit-in protest during the halftime break in the football game between the two high-profile schools, demanding that the two educational institutions change their investment strategy.

The protesters reportedly stormed the field just before the start of the third quarter, filling the midfield area and disrupting the game for some 40 minutes.

Harvard and Yale activists are demanding that the administrations of their universities stop "investing in injustice," and divest their school endowments from fossil-fuel profits.

Students from both Yale and Harvard came together to protest #climatechange and it was honestly the best part of the entire game. pic.twitter.com/mogk4APn68

Hundreds of Yale and Harvard students held up the football game for about a half hour to protest university holdings in fossil fuel companies and Puerto Rican debt pic.twitter.com/aX7tOOo1r4

The sit-in ended after negotiations between the police and students resulted in arrests reportedly conducted following the expression of a desire by the activists to be arrested.

Harvard-Yale update: The protestors have told police they want to be arrested. So police have tied them together, two at a time, and are taking them off the field.

Kickoff in about 10-mins.

Following the disrupted game, a Yale statement noted that although the university "stands for the right to free expression", the school regretted the students' choice of time and place for their action.

"It is regrettable that the orchestrated protest came during a time when fellow students were participating in a collegiate career-defining contest and an annual tradition when thousands gather from around the world to enjoy and celebrate the storied traditions of both football programs and universities,” the statement reads.

Yale has also expressed its gratitute to "the staff members and police officers who ensured the peaceful departure of students from the field", noting that "The exercise of free expression on campus is subject to general conditions, and we do not allow disruption of university events."

The sit-in, however, was praised by many climate activists in the Internet, with some politicians, particularly in the Democratic party, highlighting the significance of widespread climate activism. Among the latter were Rep. Alexandra Ocasio-Cortez, and US presidential hopefuls Julian Castro and Bernie Sanders.

Activism disrupts the present to change the future. 🌎 https://t.co/K4OLyeATMu

From the March for Our Lives, to worldwide Climate Strikes, students and young people are leading the charge to protect their futures.
I’m inspired by their efforts to hold their universities to a higher standard. https://t.co/tbskzCRvSa

When people come together to stand up for justice, we win. Congratulations to the young people demanding a sustainable future for our planet. We are with you in this fight. https://t.co/l86n85UIcy