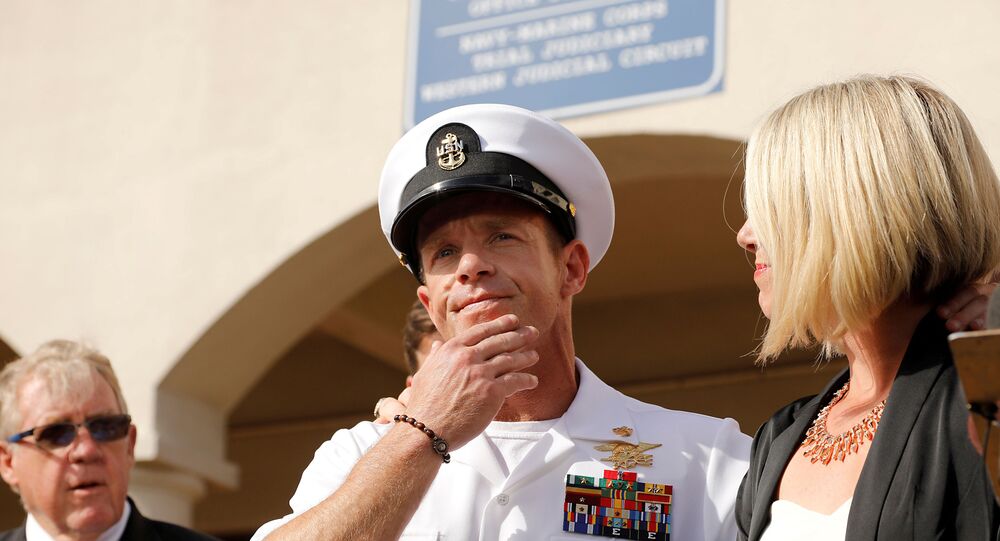 The US serviceman was stripped of his rank by a court-martial over his misconduct during a 2017 deployment in Mosul, Iraq, but it was recently restored by a POTUS decree. However, the future of his elite rank as a SEAL has come into question once again.

President Donald Trump vowed that serviceman Edward Gallagher would not be stripped of his elite rank as a US Navy SEAL, despite the US military notifying him that this could be the case notwithstanding the POTUS' decree. The president further condemned how Gallagher's case had been handled from the start.

Gallagher was stripped of his rank of chief officer and demoted all the way down to officer first class after a court-martial found him guilty of posing in a photo with a dead Daesh* fighter during his deployment in Mosul, Iraq in 2017. The court also reviewed accusations of a war crime, namely of murder, against him, but acquitted the serviceman.

The SEAL was recently restored to his previous rank by an order issued by President Trump, a decision that reportedly spurred a rift among US servicemen. A Navy official then stated that Gallagher, as well as three of his supervising officers, would be stripped of the gold eagle Trident emblem worn by members of the elite SEAL units.

Along with restoring Gallagher to his rank, the president's clemency pardoned Army Maj. Mathew L. Golsteyn and Army 1st Lt. Clint Lorance, accused of committing war crimes during their service. Trump criticised the cases against them, arguing that the soldiers were trained "to be killing machines" and are now being prosecuted for actually killing US enemies.