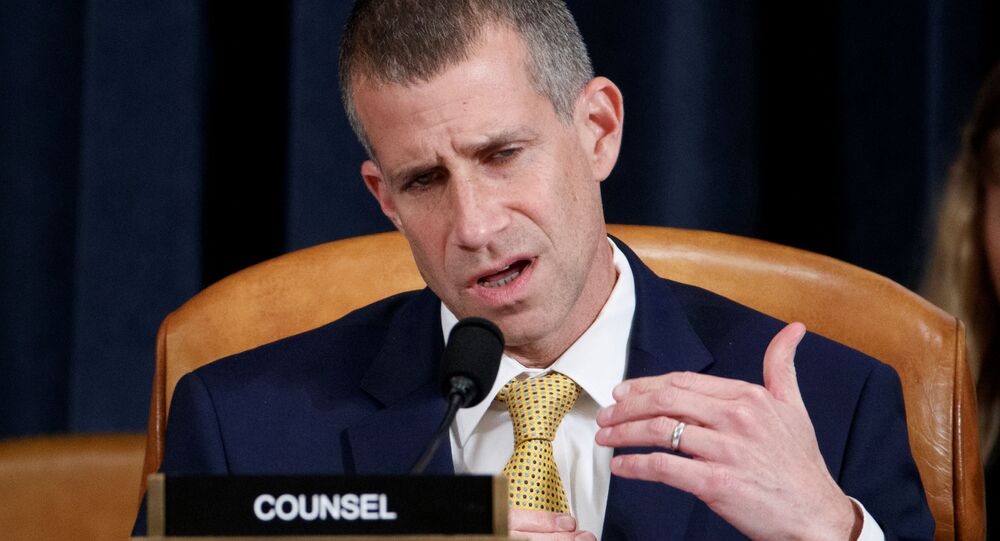 WASHINGTON (Sputnik) - Former US Special Representative for Ukraine Negotiations Kurt Volker said in a congressional testimony on Tuesday that he had not been aware of or engaged in alleged attempts to make Ukraine probe President Donald Trump’s political rivals.

"At no time was I aware of or knowingly took part in an effort to urge Ukraine to investigate former Vice President [Joe] Biden. As you know from the extensive, real-time documentation I have provided, Vice President Biden was not a topic of our discussions," Volker told the US House Intelligence Committee during the impeachment inquiry public hearing on Tuesday.

Volker described the nature of his work with the Ukrainians as an official, rather than irregular channel.

Volker said he had not been on the 25 July phone call between US President Donald Trump and his Ukrainian counterpart Volodymyr Zelenskyy, now at the core of the impeachment inquiry.

"I was not made aware of any reference to Vice President Biden or his son by President Trump, until the transcript of that call was released on September 25, 2019," Volker said.

The ex-US Special Representative has also commented on accusations made by ex-Ukrainian chief prosecutor Yuriy Lutsenko against Biden and then - ambassador to Kiev Marie Yovanovithc.

"I have known Vice President Biden for a long time. Those accusations are not credible," Volker told the US House Intelligence Committee on Tuesday.

Volker said he has known Yovanovitch for many years and allegations against her did not appear to be credible.

Lutsenko accused the US diplomatic mission of trying to "establish total control" over Ukrainian law enforcers by spreading its influence from National Anti-Corruption Bureau (NABU) to the prosecutor general’s office.

Ukraine launched an investigation into the privately-held gas giant Burisma after a coup in Kiev in early 2014. Hunter Biden, the son of Joseph Biden, joined Burisma's board in April of that year.

In September, House Democrats launched an impeachment inquiry after a whistleblower complaint claimed Trump may have abused the power of office. The complaint alleged that Trump pressured Zelenskyy during the 25 July phone call to investigate his political opponent, former Vice President Joe Biden and his son Hunter.

Trump released right away the transcript of the conversation and said that there was no quid pro quo in his dealings with Ukraine. Trump characterized the impeachment inquiry as yet another political witch hunt by Democrats aimed at reversing the result of the 2016 presidential election.