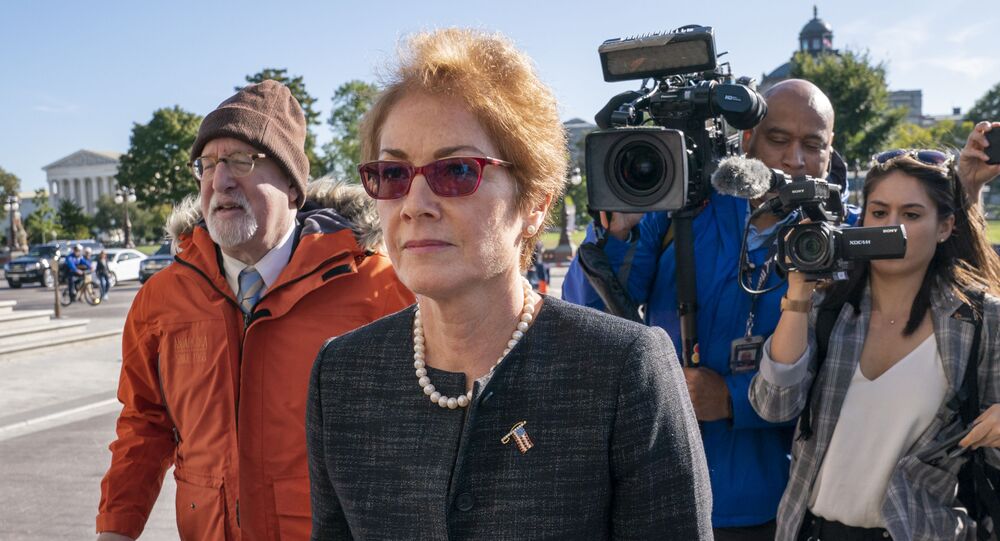 WASHINGTON (Sputnik) - The House is holding its second public hearing with former US envoy to Ukraine Marie Yovanovitch centring around her ouster which, according to her, is pertinent to the impeachment probe against Trump.

Former US Ambassador to Ukraine Marie Yovanovitch flatly denied allegations that she circulated a list of potential corruption targets in Ukraine that the United States did not want prosecuted, according to testimony at the opening of hearings in the House impeachment probe of President Donald Trump on Friday.

"I want to reiterate first that the allegation that I disseminated a do not prosecute list was a fabrication", Yovanovitch said. "Mr Lutsenko, the former Ukrainian prosecutor general who made that allegation, has acknowledged that the list never existed. I did not tell Mr Lutsenko or other Ukrainian officials who they should or should not prosecute. Instead I advocated the US position that rule of law should prevail."

US President Donald Trump in a series of tweets on Friday criticised former Ambassador to Ukraine Marie Yovanovitch’s performance while she was testifying in the impeachment hearing against him. He defended his decision to replace Yovanovitch - appointed by his predecessor Barak Obama - as the US ambassador to Ukraine, where she served from August 2016 until May 2019.

....They call it “serving at the pleasure of the President.” The U.S. now has a very strong and powerful foreign policy, much different than proceeding administrations. It is called, quite simply, America First! With all of that, however, I have done FAR more for Ukraine than O.

Reacting to the criticism, Yovanovitch said that the tweets by Trump were 'very intimidating', AFP reported.

The career diplomat, who joined the US Foreign Service in 1986, was abruptly removed from her post in May. Her ouster was one of several incidents listed in a whistle-blower complaint filed by a CIA officer alleging that Trump withheld foreign assistance from Ukraine in order to pressure the country into investigating his political rival, former Vice President Joe Biden.