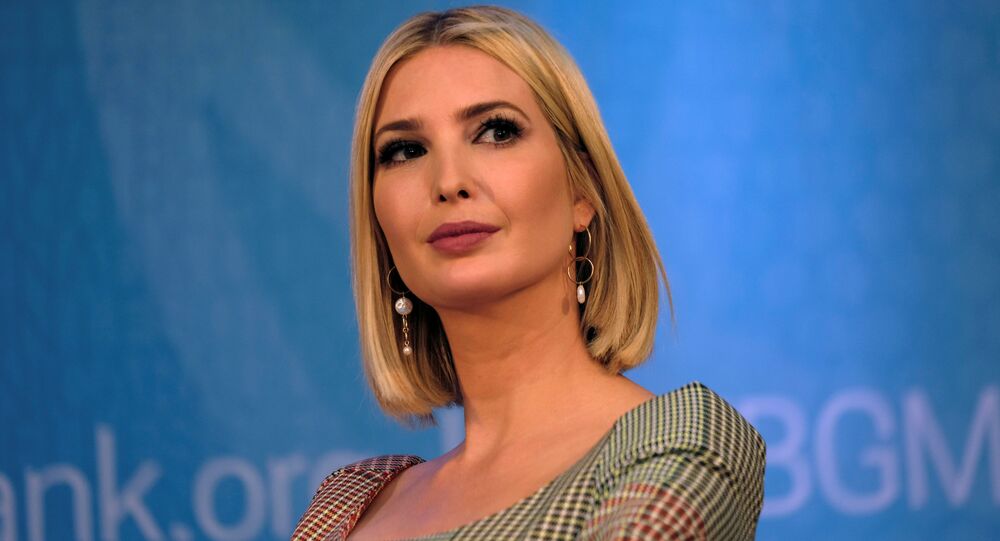 Ivanka literally shined in a gold and cream dress on her women’s empowerment trip, but it failed to distract the public from her social mission in the North African country, and even sparked quite a few stinging remarks.

The senior White House adviser, First Daughter Ivanka, visited Morocco last week to promote the White House’s Women’s Global Development and Prosperity Initiative, which she has been championing over the past year.

Ivanka attended a dinner with Morocco’s Princess Lalla Meryemm, with an image of her from the occasion shared by White House Media Director Carolina Hurley.

In it, the presidential daughter could be seen wearing a gold and cream Moroccan national dress. The chic floor-length garment couldn’t help – naturally – but draw netizens’ curious glances.

Was this paid for with taxpayer money or money her family stole from needy veterans?

Keeping it classy I see. 🙄 pic.twitter.com/BeItEMMCDk

Extortion is a crime with a 15 year jail sentence.

That’s a lot of pomp and circumstance while on a mission to help empower oppressed and impoverished women.

In other news Ivanka wears a kimono in Japan, a sari in India and a grass skirt in Hawaii, taking the lead for Best In Cultural Appropriation.

Yeah but dressing up as a beautiful African lady is cultural appropriation, it’s the same thing. Besides Donald, if Ivanka did that people would want her fired.

However, fans quickly rushed to silence criticism, pointing to Ivanka’s “dazzling” looks while at the Moroccan palace:

Ivanka looks dazzling in that beautiful dress.
Ivanka Trump dazzles in gold for dinner at the palace in Morocco https://t.co/aTNeVRWtWU via @Femail

I am a moroccan and the traditional kaftan's (the dress) sleeves are usually huge and hidding the hand. I know much of you will be proning respect towards other cultures.
She is showing respect&humility by wearing a traditional women dress of Morocco a long time US friend country

The visit to the North African country is Ivanka’s third overseas trip this year to promote the Women’s Global Development and Prosperity Initiative, spearheaded in February to consult and assist women in developing countries deepen their engagement in their countries’ economic life.

“The W-GDP initiative aims to empower women to reach their full economic potential & will impact 50 million women around the globe. I am proud to have participated in the launch of W-GDP & I applaud the Administration for leading this imperative effort.” – LR @RepMcCaul https://t.co/XQYeGadLoC

In October 2017, Ivanka Trump launched a women’s entrepreneurship fund with the World Bank and 13 other countries to offer over $1 billion to support women-led business projects.
In 2019, the initiative was extended by a $50 million project aimed at stimulating countries to redact laws that ban women from owning property or gaining access to business loans.
In a parallel move, Ivanka is behind a US domestic social initiative called the “Pledge to American Workers", launched by the presidential aide to help boost employees’ careers and general well-being.