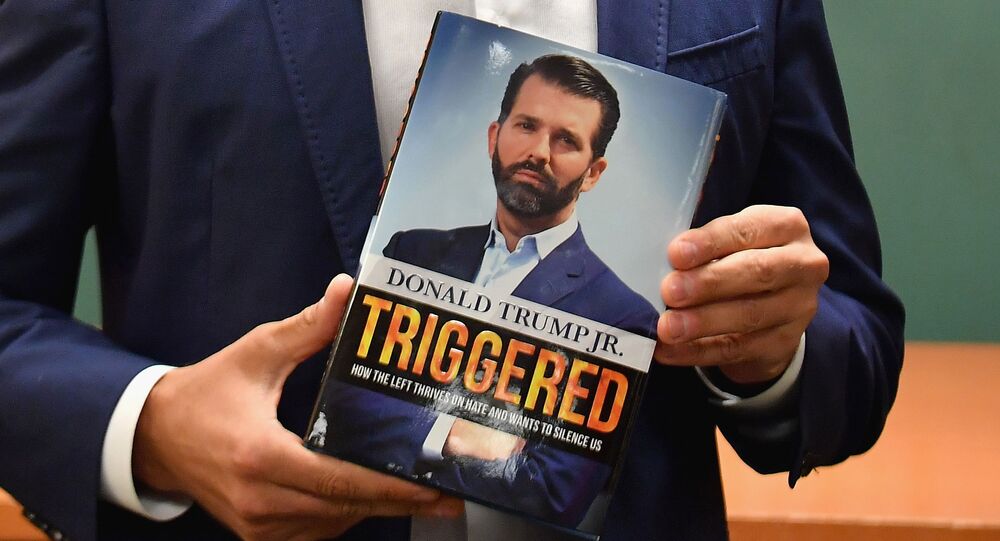 The release comes just days before another highly-debated book is scheduled to see the light of day - The Warning, penned by the same author of a dubious 2018 op-ed in The New York Times focusing on an alleged plot against POTUS.

Donald Trump has taken to Twitter to sing the praises of his son’s Donald Jr.’s newly released book titled “Triggered”, citing its top rating on The New York Times’ shortlist.

However, reactions have varied greatly, with many questioning if the author himself or perhaps his family should be credited for the overwhelming success in sales.

Some assumed - some laughingly  - that all of the copies of the book had perhaps been bought by the Trumps, their inner circle, or affiliated structures…

Wow! Did you buy these books and bunk them in the container port?

While others noted the top spot hardly came as a surprise:

Why am I not surprised?

A different netizen referenced Trump Jr.’s remarks that he is a private citizen entitled to share whatever he prefers to online:

You mean the guy who wants us to believe he's just a private citizen?
How much money is HE making off of your presidency?

I heard he enjoyed this encounter. https://t.co/zYMchlQK7i

…while another liked him to Hunter Biden, who until recently has dominated media headlines:

Let's see if he's made more than Hunter Biden, since he is unqualified for any job.

“Someone has to buy the book. Libs can barely read", another directed a veiled dig at Democrats, who were deemed unlikely to express interest in such a book. However, one person struck back saying it’s the “red hats” that can’t read:

Trump's book was released on 5 November and outlines his view of the left-wing political camp, their tactics, and what he sees as a series of tricks meant to push conservatives out of politics.

The book's leap to the top comes just days before the tell-all "A Warning" is set to be released, penned by the anonymous author of a controversial op-ed that enraged President Trump in 2018.

The article, "I Am Part of the Resistance Inside the Trump Administration", depicted President Donald Trump's decision-making and problem-solving as uninformed and irresponsible, and said that many current members of his White House administration intentionally undermine his proposals and orders for the good of the country.

The White House referred to the book as a "work of fiction” calling the author a “coward”. The release prompted Mike Pence, who is reportedly mentioned in the book, to insist he had never floated using the 25th Amendment to oust Trump and replace him, with the latter reportedly assumed in the book.