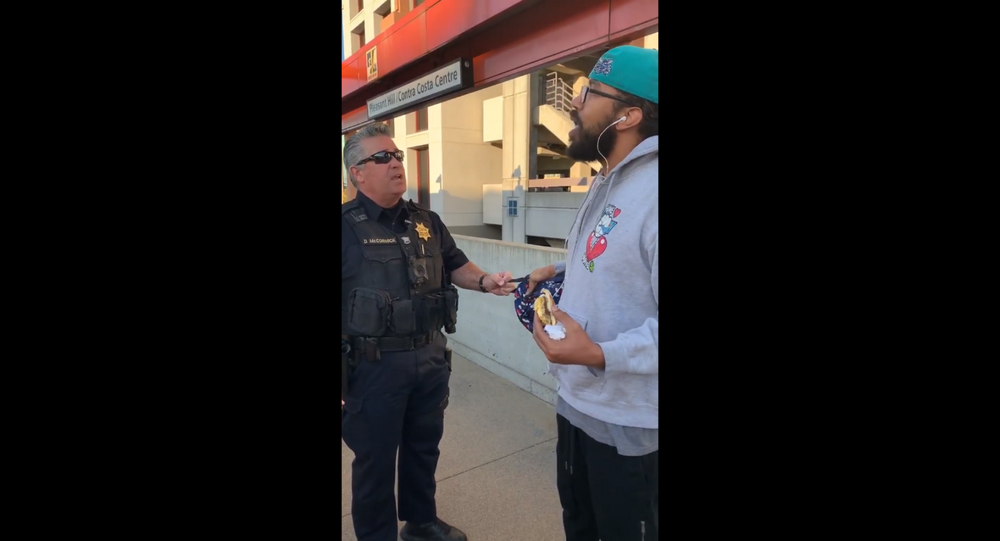 The sandwich altercation unfolded last week after a BART police officer confronted rider Steve Foster for deciding to eat a breakfast sandwich on the train platform. The official was initially called to the scene after receiving reports of an intoxicated woman in the area; however, he later turned his attention to Foster after realizing he was in violation of the system’s “no food” policy.

“Moving 415,000 riders each day comes with complexities and there are laws in place to keep our system safe, welcoming, and clean. I’ve seen the video of the incident involving a man eating on our platform and our police response,” reads the statement from Powers. “Eating in the paid area is banned and there are multiple signs inside every station saying as much. As a transportation system our concern with eating is related to the cleanliness of our stations and system.”

“The officer asked the rider not to eat while passing by on another call. It should have ended there, but it didn’t,” he adds, before explaining that the officer ultimately decided to issue Foster a citation when he spotted him continuing to eat after being told to stop.

“The officer was doing his job but context is key. … I’m disappointed how the situation unfolded.  I apologize to Mr. Foster, our riders, employees, and the public who have had an emotional reaction to the video,” the release continues.

The statement, however, has brought little comfort to Foster, who told local news station KRON 4 that he isn’t “feeling that apology at all.”

“They kind of flipped the story,” Foster said. “What do I want? I want him to be disciplined. I feel like if you don’t know how to approach people in that field of work, then maybe you shouldn’t be in that position.”

He added that he has no regrets about the altercation, and that he would conduct himself the same way again.

Cellphone footage of the sandwich-centered incident, which was captured by Foster’s partner, begins after the initial confrontation and with the officer already firmly grasping Foster’s backpack.

“You singled me out, out of these people,” a distraught Foster can be heard saying as the officer notes that he is detaining him because he is eating. “I'm not going to jail. Going to jail for eating a f**king sandwich? …  I haven’t done anything wrong.”

Both Foster and his partner continue to go back and forth with the officer, asking for an explanation as to why there are food shops at the station if they’re not allowed to eat in the area. The couple can also be heard asking the cop about the location of signs discouraging riders from eating on BART property.

The video goes on to show Foster being placed in handcuffs after several additional police officers arrive on the scene, eventually cutting off after he’s transported into a secure room away from the train platform. He was ultimately given a citation for violating BART’s policy against eating on public transportation.

“No matter how you feel about eating on BART, the officer saw someone eating and asked him to stop. When he didn’t, he was given a citation,” reads a statement issued on BART’s Twitter page.

Public outrage over the matter has led to a staged “eat-in” by local residents.

​A similar demonstration is scheduled to take place on November 16 at BART’s Pleasant Hill station, where Foster was apprehended by officers.

An investigation into the matter is being conducted by BART’s Independent Police Auditor. The probe’s findings will be submitted to the Citizen Review Board.