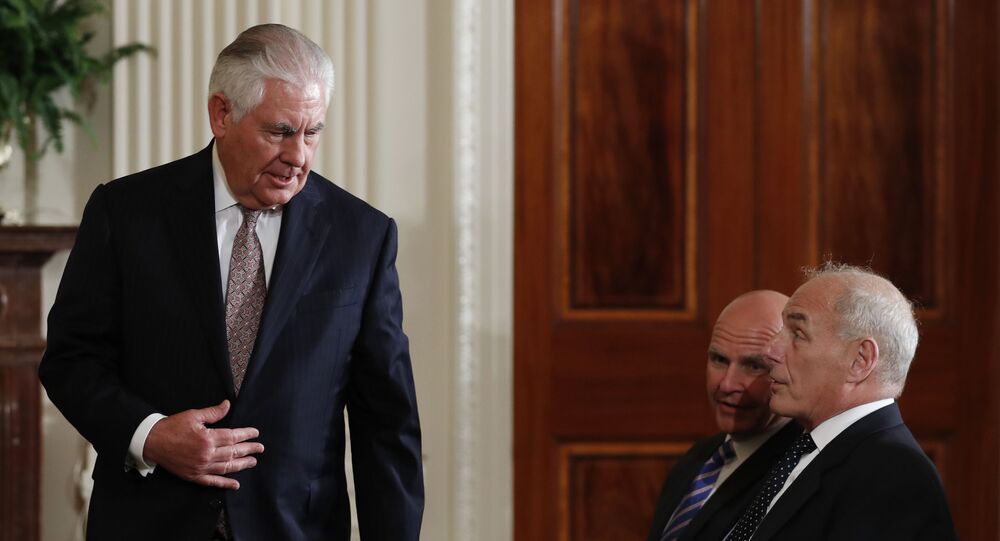 Former US Envoy to the United Nations, Nikki Haley, revealed on Sunday interesting backstage details from the recent past of the White House.

Haley claimed that, while senior US diplomat, she witnessed a private conversation between then-Secretary of State Rex Tillerson and then-White House Chief of Staff John Kelly, who allegedly defended resisting US President Donald Trump.

Haley argued, however, that she was not impressed at the time with the dialogue, adding that she did not appreciate having the two senior US officials confide in her.

“It should've been, 'Go tell the president what your differences are, and quit if you don't like what he's doing'”, Haley told CBS, adding that "to undermine a president is really a very dangerous thing. And it goes against the Constitution, and it goes against what the American people want. And it was offensive".

In the interview, Haley criticized the ongoing impeachment probe against Trump.

“You're gonna impeach a president for asking for a favor that didn't happen and giving money and it wasn't withheld? I don't know what you would impeach him on [...] The Ukrainians never did the investigation. And the president released the funds. I mean, when you look at those, there's just nothing impeachable there”, Haley said.

The freeze of hundreds of millions of dollars in US military aid to Ukraine over the summer has been at the heart of the impeachment inquiry against Trump. The Democrats believe that the president held back aid to Ukraine in a bid to pressure its leadership into opening an investigation into allegations that former Vice President Joe Biden, a Democratic candidate for the White House whose son was a board member at Ukrainian gas company Burisma, engaged in corrupt acts.

Trump has denied applying pressure to Ukrainian leadership while he requested it to probe possible instances of corruption, which he said is his duty as US president.