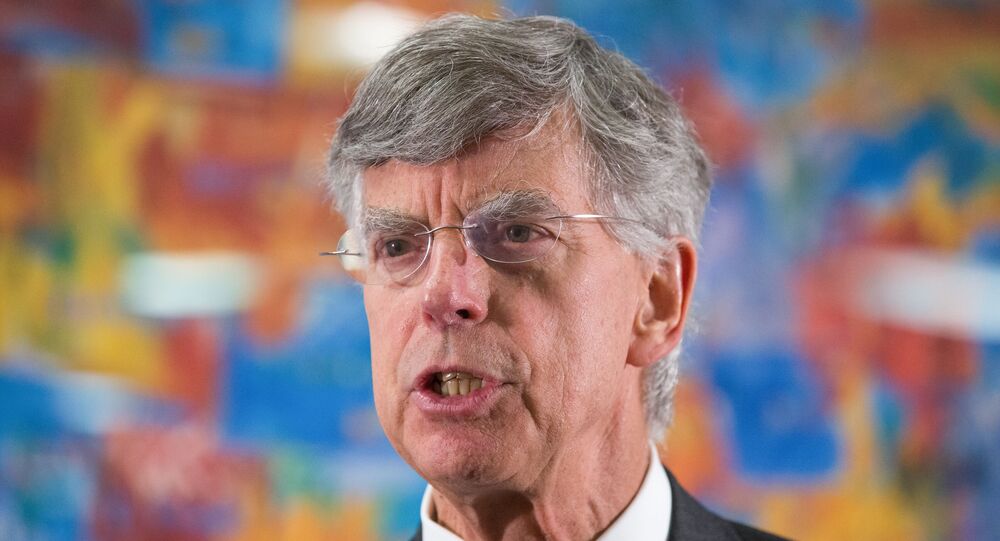 House Democrats released on Wednesday the transcript of their impeachment inquiry interview with William Taylor, Washington's top diplomat in Kiev.

The transcript and its highlights were released Wednesday afternoon by the leaders of a trio of House committees leading the impeachment inquiry into US President Donald Trump that includes the House Intelligence, Foreign Affairs, and Oversight and Reform committees.

In one passage of Taylor's testimony, he described a conversation between him and US Ambassador to the European Union Gordon Sondland, who relayed Trump's belief that no quid pro quo relationship existed with Ukrainian President Volodymyr Zelenskyy or one of his top aides, Andriy Yermak, but that a "stalemate" would exist without a public statement by Zelenskyy announcing Trump's desired investigation of former US Vice President Joe Biden.

In another exchange, Taylor described what a Representative said described a "quid pro quo" type of situation.

"And when you say that, this was the first time I heard that the security assistance - not just the White House meeting - was conditioned on the investigation, when you talk about conditioned, did you mean that if they didn’t do this, the investigations, they weren’t going to get that, the meeting and the military assistance?" Taylor was asked by a congressmember during the questioning.

"That was my clear understanding, security assistance money would not come until the President [of Ukraine] committed to pursue the investigation," Taylor replied.

"So if they don’t do this, they are not going to get that was your understanding?" the congressmember asked.

The congressmember clarified: "Are you aware that quid pro quo literally means this for that?"

“The testimony of Ambassador Taylor - a West Point graduate, Vietnam veteran, and nonpartisan diplomat - shows how President Trump withheld military aid to Ukraine and conditioned its release, as well as a vital White House meeting, on the President of Ukraine publicly announcing investigations into debunked conspiracy theories involving the Bidens and the 2016 election," the chairs of the three committees said in a press release accompanying the documents.

“Ambassador Taylor’s testimony lays bare how this shadow foreign policy channel pursued by the President’s agent, Rudy Giuliani, with the assistance of Ambassadors Sondland and Volker, placed immense pressure on the Ukrainian government to accomplish the President’s goal. Ambassador Taylor makes clear why this military aid and continued bipartisan support for Ukraine are so critically important—and why these efforts to undermine US foreign policy for domestic political reasons were so damaging. We look forward to his public testimony," their statement continues.

The news comes the day after similar releases of testimony transcripts from Sondland and former US Special Envoy to Ukraine Kurt Volker.

Open hearings by the trio of House committees are set to begin next week, the ground rules having been set by a House resolution adopted last Thursday.

How About Another Call to Ukraine? Trump Reveals What He Needs to Get the Better of Joe Biden