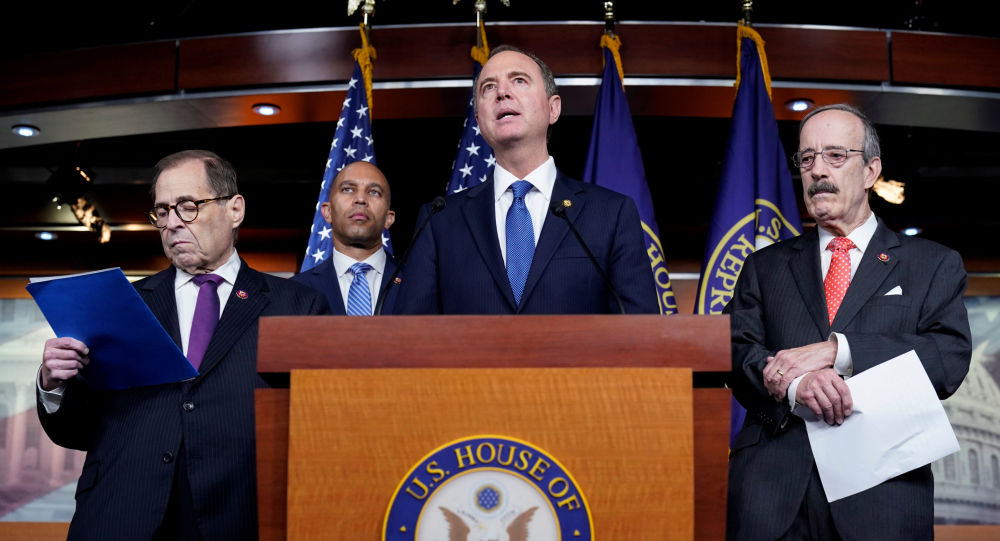 WASHINGTON (Sputnik) - The US House Intelligence Committee will hold its first public hearings in the Trump-Ukraine impeachment inquiry next week, Chairman Adam Schiff said in a statement.

Schiff said more public hearings in the impeachment inquiry will be announced soon.

Next week, the House Intelligence Committee will hold its first open hearings as part of the impeachment inquiry.

On Wednesday, November 13, 2019, we will hear from William Taylor and George Kent.

​The House Intelligence Committee this week released closed-door testimonies of Yovanovitch, US Ambassador to the European Union Gordon Sondland, former US Special Representative for Ukraine Kurt Volker, and former Senior Advisor to the Secretary of State Ambassador Michael McKinley.

Schiff said in later remarks that the testimony of former US Ambassador to Ukraine William Taylor will be made public on 6 November.

In September, House Democrats launched an impeachment inquiry into a whistleblower complaint that claimed US President Donald Trump may have abused the power of the office during a 25 July phone with Ukrainian President Volodymyr Zelenskyy.

The whistleblower said they received information that Trump pressured Zelenskyy to investigate potential corrupt activities by former Vice President Joe Biden and his son Hunter and froze US aid as leverage to persuade Kiev to conduct the probe.

Trump released the transcript of the call and slammed the impeachment inquiry as another political witch hunt by Democrats aimed at reversing the result of the 2016 US presidential election.