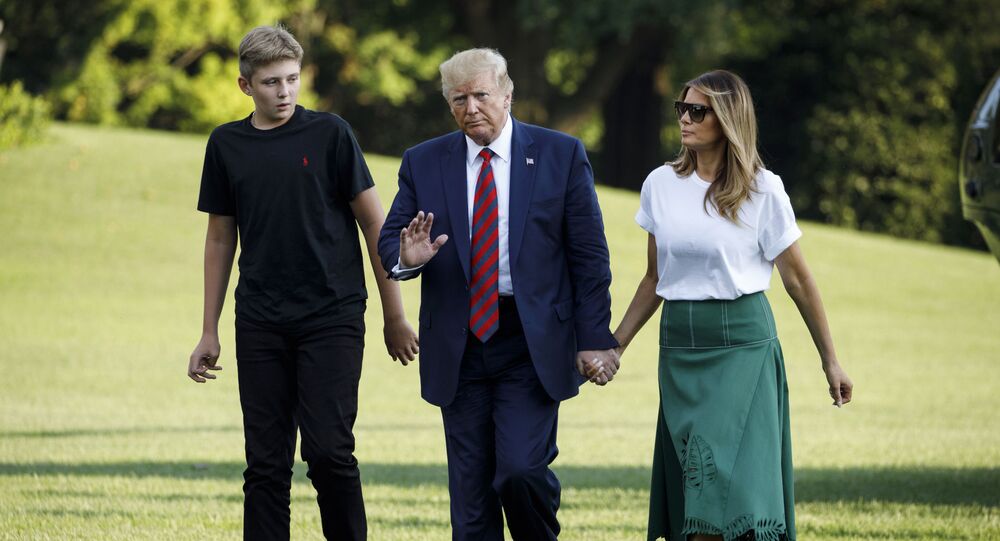 According to a Trump family biographer, the real stories happening inside the White House are much more intriguing than those made up by haters, and that the deeply affectionate personal relationship between the couple is definitely worth commenting on.

Doug Wead, a historian and writer who spent two years with the Trump family as he was writing his book titled “Inside Trump’s White House: The Real Story of His Presidency", said on Monday’s airing of “Fox & Friends” that a great many claims about the first family are nothing but fabricated stories. For instance, Wead referred to the reports coming in time and again that the president and his wife Melania might be estranged as “totally false".

Per the author of the biographical work, despite Melania's impression of somewhat distancing herself from her better half in public, Trump himself brings up his wife’s name regardless of the subject he's talking about. Wead referred to them as tender lovers that playfully tease each other:

“They are a couple. Well, [Melania’s] so dignified and she handles herself with such grace. In every conversation, [Donald Trump] brings up Melania. Melania this, Melania that", Wead said.

He went on to recount a scene in his book when the Secret Service would not allow the first lady to accompany the president into a combat zone to address the troops. However, after she verbally opposed the arrangement, she was allowed to attend alongside POTUS:

“She says, 'If my husband is in danger, I will share the danger'. And so on Christmas night, they fly out together to be with the troops", Wead recalled.

As he writes in his op-ed for Fox News, although publicly the whole family talks about what a great privilege it is to serve the country, in the close-knit family circle, they retain no illusions about the tensions they go through, with the latter turning into a subject of Trump’s sarcastic remarks:

“Melania, honey, look at this incredible journey I have brought you on", Wead cited POTUS as saying, while he recounted that Melania would typically answer:

While speaking about fabricated tales, Wead stressed it is the real stories that are much more gripping, boasting that the president had even allowed him to read his private correspondence with North Korean leader Kim Jong-un as well as shared his theories on who had pursued the Russian collusion conspiracy and why.

During Wead’s two years of interviewing the Trumps, a new book saw the light of day claiming to have the real story on how Donald Trump chose Mike Pence as his running mate, but, according to the writer, it was completely false.

“Want to know what really happened?” Eric Trump asked him, the author recounted. “And he then related the details of that night he and his father had steaks together with Mike and Karen Pence, at the Capital Grille at the Conrad Hotel in Indianapolis", Wead continued, moving on to cite Jared Kushner as commenting on what’s going on inside the White House:

There has been a lot of media speculation about the reportedly tense relationship between the first couple. Most recently, Trump himself reportedly puzzled attendees during a fundraising event, when he took a veiled swipe at his wife Melania lamenting she would hardly cry her eyes out if he were fatally shot. However, it didn't cause anything but laughter and a bit of dismay among the public.