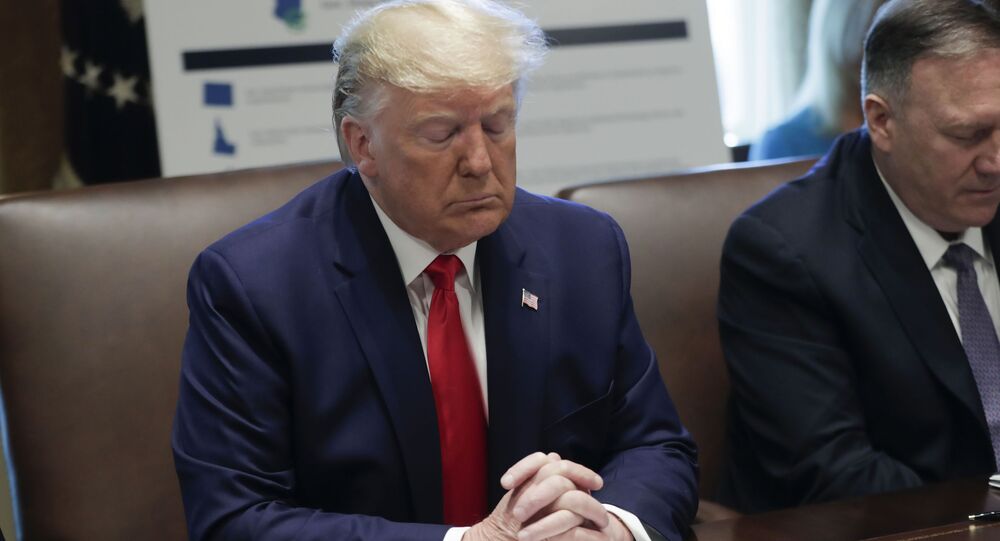 The Democrat-led House of Representatives voted in favour of a resolution to set down ground rules for the impeachment inquiry into President Trump on Thursday. The resolution included a mandate for public hearings, the release of transcripts on previous closed-door hearings, as well as rules for the president and his council in mounting a defence.

Televangelist and presidential spiritual advisor Paula White and over two dozen other pastors and faith leaders were asked to lay their hands on the president and pray for him at a meeting in the White House last week, Christian news magazine Charisma News has reported.

White, who delivered the invocation at Trump’s inauguration, is the chair of the administration’s evangelical advisory board, and has known the businessman since 2002, when he contacted her after watching her on television.

The faith leaders were also said to have prayed for Trump over what they saw as the “unjust” impeachment hearings against the president.

White posted a photo of the pastors’ visit with Trump in the White House.

Pastor Jack Graham of the Prestonwood Baptist Church in Texas, tweeted about the impeachment hearings last week, calling the probe a “manipulative and bogus ‘investigation’” which was “bad for our country and should be stopped.” His sentiment was echoed by Tony Perkins, president of the Family Research Council Protestant activist group, following the meeting with Trump.

Praying for @realDonaldTrump and glad to see Sen. Lindsey Graham’s resolution in opposition to the unjust and secretive impeachment hearings led by partisan politicians. This manipulative and bogus “investigation” is bad for our country and should be stopped. Enough is enough

Glad to visit with @realDonaldTrump to discuss how this administration is advancing conservative policies. It is clear to me the impeachment is less about the president and more about his pro-life, pro-family policies.

Evangelical Christians make up a substantial portion of Trump’s support base and are a major force in US politics, with the Pew Research Center calculating that 81 percent of white evangelicals voted for him in 2016.

Social media users were divided after learning about Trump’s prayer session with the Christian leaders, with some praising the president and saying they too were praying for him, quipping that Trump was “colluding with God,” while others cracked jokes about the prayer really being an “exorcism,” or posting various memes.

God bless you President Trump!!!
You have many prayer warriors lifting you up!!!
❤🙏❤🙏❤ pic.twitter.com/IHd5tk7Ezn

He is the first President I’ve ever prayed for! Thank you for all you do, Mr. President! 🙏🏻💗

How would YOU caption this picture?

I'm a Christian and a believer in prayer, but I'd be amazed if any of these people were praying that Trump would adopt Matt 25 or Sermon on the Mount principles. Probably praying that he can continue to keep churches political & tax exempt. https://t.co/5i3NO4dMiV

On Thursday, the Democratic House of Representatives approved a set of ground rules for the impeachment inquiry against Trump amid complaints from Republicans about the lack of transcripts of the closed-door depositions, and other issues.

The Democrats launched the impeachment probe against the president on September 24, with the allegations centring around Trump’s July phone call with Ukrainian President Volodymyr Zelensky. Democrats accuse Trump of seeking to ‘get dirt’ on his potential 2020 rival Joe Biden by asking Zelensky to reopen an investigation into his son Hunter Biden’s alleged money laundering activities while working for a Ukrainian energy company. Trump has denied claims that he has done anything wrong, calling the Zelensky phone call a “perfect call” and accusing the Democrats of attempting to stage a “coup.”

This week, Trump said he would be ready to read the transcript of his phone call with Zelensky in a live television address so that the American people see that it was a “straight call.” He later added that he would “certainly” invite Zelensky to come to Washington for a joint press conference if the Ukrainian president wished to do so. Zelensky has previously said that he did not felt “pressured” by Trump during the July call, and that the US president couldn’t pressure him even if he tried.