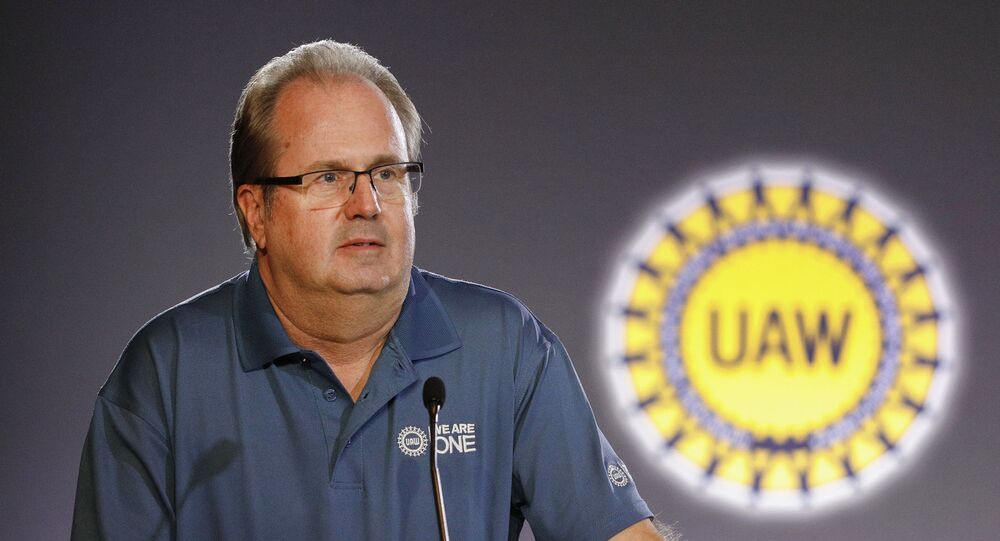 US Auto Workers Union President Stepping Down Amid Corruption Probe

WASHINGTON (Sputnik) - The President of the United Auto Workers (UAW) Gary Jones will be leaving his post on 3 November amid an ongoing federal corruption investigation, a statement published Saturday on the union’s website said.

"UAW President Gary Jones has asked for a leave of absence, following a vote of the Executive Board. It will be effective Sunday, 3 November", the statement read, adding that Vice President Rory Gamble will take his place as acting president.

UAW union president takes leave of absence under cloud of U.S. federal probe The president of the United Auto Workers union, who has been linked https://t.co/80UvuzQHSD #USRC #BusinessNews pic.twitter.com/wVXm8aPMVl

The announcement comes just as union leaders and members are meeting in Detroit to review a newly negotiated contract with Ford Motor Company, according to news outlet Detroit Free Press. The union had threatened to go on strike, suspending the operation of Ford’s 50,000 strong workforces, if specific conditions were not met.

"The UAW is fighting tooth and nail to ensure our members have a brighter future. I do not want anything to distract from the mission. I want to do what’s best for the members of this great union", the statement cited Jones as saying.

According to The Wall Street Journal, Jones’ home was searched by the Federal Bureau of Investigations (FBI) in August as part of a multistate criminal investigation into alleged corruption in the union’s leadership. Jones has not been charged, according to US broadcaster CNBC.

The UAW, officially the International Union, United Automobile, Aerospace and Agricultural Implement Workers of America, claims its members number over 400,000, mostly autoworkers in the car manufacturing hub of Michigan. The union has been grappling to defend workers' rights amid an economic slowdown and rapid technological changes that make some workers obsolete.