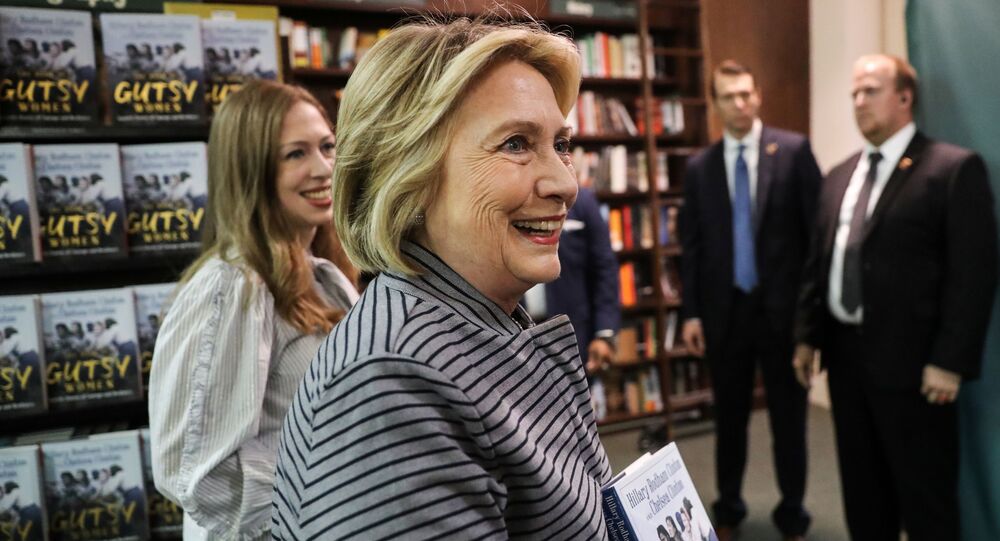 Jeffrey Epstein, who was accused of prostituting underage girls, was found dead in his Manhattan jail cell at the age of 66. His death was ostensibly the result of a suicide by hanging, although a reputable pathologist has just announced that he believes Epstein was strangled to death.

Hillary Clinton laughed when fielding a satirical question about how she managed to kill Jeffrey Epstein.

During Clinton’s appearance on the Daily Show on Thursday together with daughter Chelsea, host Trevor Noah asked: “I have to ask you a question that has been plaguing me for a while, how did you kill Jeffrey Epstein?”

Hillary and Chelsea burst out laughing, before Noah continued: “You seem to be behind everything nefarious, and yet you do not use it to become president. What is the game plan? What does it feel like being the boogeyman of the right?”

Noah clearly asked the question in jest, parodying the many conspiracy theories – including the famous ‘Clinton Body Count’ suggesting that Bill and Hillary Clinton secretly assassinate their political enemies.

“It’s a constant surprise to me because the things they say, and, now, of course it’s on steroids with being online, are so ridiculous beyond any imagination that I could have and yet, they are so persistent in putting forth these crazy ideas and theories,” Clinton said.

Trevor Noah starts off an interview with Hillary Clinton by asking “How did you kill Jeffrey Epstein?” pic.twitter.com/hhoq4CglZm

The hashtag #ClintonBodyCount blew up on Twitter in August following the news that hedge fund manager and convicted sex offender Jeffrey Epstein had taken his life while awaiting trial in a New York jail on sex trafficking charges.

can’t get over chelsea clinton laughing at epstein murder jokes on the daily show while epstein’s second in command, ghislaine maxwell (who’s currently evading international authorities) was front and center at her wedding. 😂😂😂😂😂

Hiding in plain sight .... doesn't deny it though, does she

I don't know why people are shocked about #Epstein.

I knew he was going to get Suicided by the Clintons when I first heard about Bill on the pedi express 20+ times.

I can't emphasize enough how impossible it is that the Clintons did not know Jeffrey Epstein was running an elite pedophile ring at every point they interacted with him.

The fact that the disgraced millionaire had been taken off suicide watch days before his death – as well as his reported links to rich and powerful people including Bill Clinton – have prompted speculation that some of his high-profile ex-friends were implicated.

Bill Clinton had travelled to Europe, Asia, and Africa aboard Epstein's private jet and visited Epstein’s New York apartment once in around 2002. Ghislaine Maxwell, Epstein’s supposed “pimp” and “groomer of girls”, was photographed at Chelsea Clinton’s wedding in 2010. Bill Clinton insists he knew nothing about the crimes alleged against Epstein.

US Attorney General William Barr has said there were “serious irregularities” at the detention facility where Epstein was held, but officials ruled the death a suicide by hanging.

Michael Baden, the forensic pathologist who was hired by Epstein’s brother and observed the autopsy, disputed the official account earlier this week and said that the autopsy pointed to homicide rather than suicide.

The incumbent NYC medical examiner, Barbara Sampson, on Wednesday stood by her conclusion that the cause of Epstein’s death was a suicide by hanging.

Although the Hillary-Epstein theory is just a theory, the former secretary of state was seen previously laughing over a high-profile death. During her time in office in 2011, Mrs Clinton had a similar reaction to then-unconfirmed news about the lynching of Muammar Gaddafi, the Libyan leader overthrown during a US-backed uprising.

“We came, we saw, he died,” she exclaimed when told of the reports of his death.