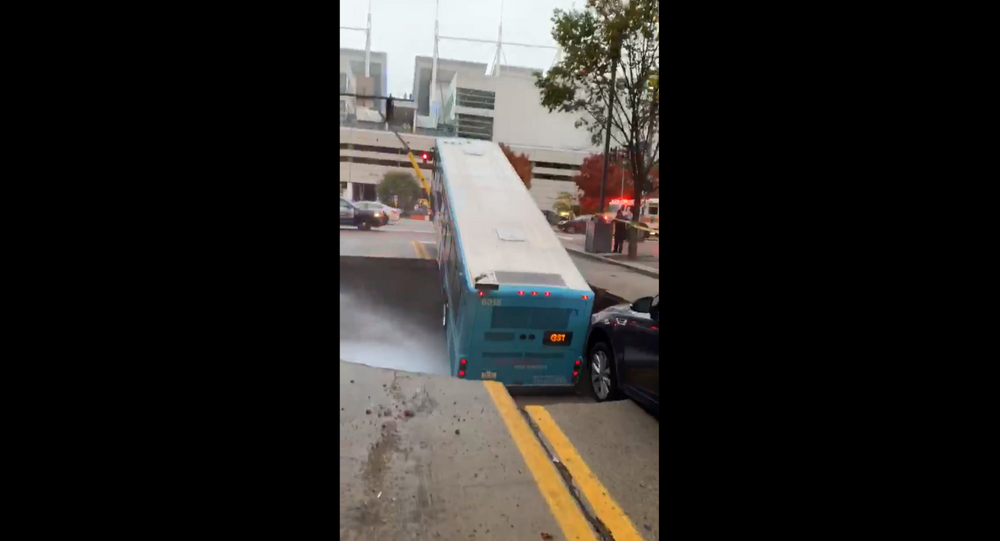 A 100-foot-wide and 20-foot-deep sinkhole swallowed up the back end of a Port Authority bus on Monday in Pittsburgh, Pennsylvania, amid the hectic morning commute.

Local police were called to the scene before 8 a.m. local time and are expected to remain on site for much of the day as workers attempt to safely remove the bus, which is sitting atop several power and gas lines, news station WPXI reported.

​The latest updates from city officials indicate that the blue Kia Optima that partially fell into the sinkhole was removed from the scene, and that a crane company has been ordered to provide two cranes that will be able to remove the bus.

The Pittsburgh Public Safety Department stated via Twitter that surrounding traffic will be affected for the next eight to 10 hours, adding that water service interruptions and electrical outages nearby may be imminent as officials work to remedy the situation.

​Aside from the driver, only one passenger was aboard the commuter bus. Local station CBS Pittsburgh reported that the passenger was transported to nearby Allegheny General Hospital to be treated for a minor neck injury. Neither the bus driver nor the driver of the Kia Optima sustained any injuries.

​City officials have revealed that both vehicles were stopped at a red light when the sinkhole consumed the back end of the bus. It has also been noted that at the time the hole appeared, a 10-inch water main broke and sent gallons of water shooting outward.

An investigation into the incident is ongoing.

Dreadful Sinkhole That Can Swallow Tower-Block Opens Up in Russia