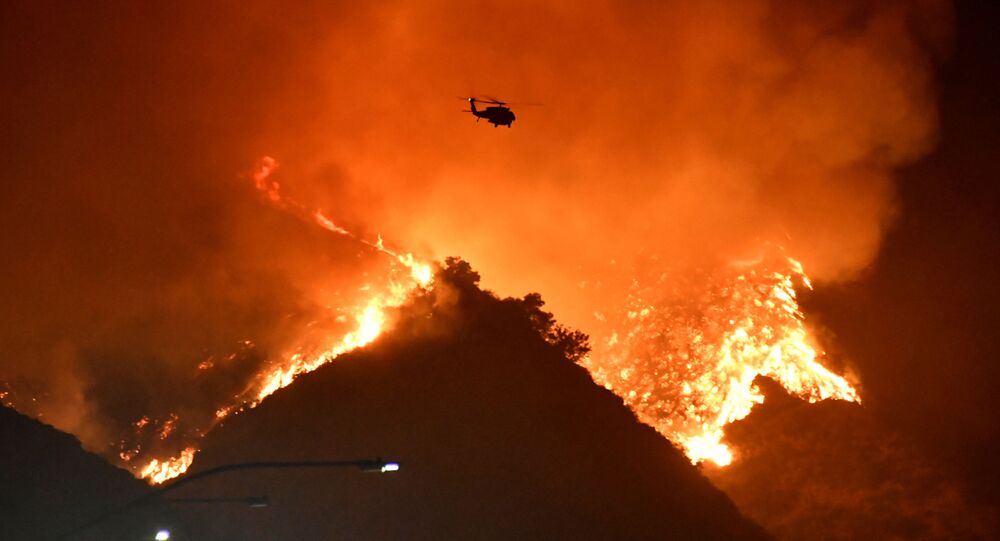 According to state authorities, the Californian wildfire, which has been burning since 23 October, has grown to 85 square miles (220 square kilometres), damaged 94 buildings, and is threatening another 80,000 houses - including parts of the city of Santa Rosa.

A fire broke out in Los Angeles earlier in the morning, threatening thousands of homes, the Los Angeles Times reported. As the raging fires across Los Angeles and Sonoma Counties continue to threaten people and cause severe damage to buildings in the area, the US state of California announced on 25 October a state of emergency.

The wildfire has prompted a major evacuation. Some 180,000 people were ordered to flee in Sonoma County, the sheriff's office said earlier, adding that it might be the largest evacuation order in memory.

Social media users have shared photos and videos of the wildfires, showing the large plumes of smoke and footage depicting scenes of burning houses reminiscent of hell.

@NBCLA About 3 am on the west side of the 405, a half mile north of Getty Center. Feel free to use video if so desired. pic.twitter.com/DgwQzfA3OE

Fire off the 405 near the Getty Center in Bel Air. #firelosangeles pic.twitter.com/NUXGOTO7e4

savannah and i were driving on the 405 when we saw this big green light and then two small little fires. we immediately pulled over and called LAFD and 10 minutes later it turned into this big fire. for those near getty center, please stay safe and follow evacuation orders ❤️ pic.twitter.com/ochLNiaUNW

​Los Angeles Lakers star LeBron James tweeted that he and his family had to evacuate his home.

Man these LA 🔥 aren’t no joke. Had to emergency evacuate my house and I’ve been driving around with my family trying to get rooms. No luck so far! 🤦🏾‍♂️

The Tick fire was reported on Thursday night and is still raging across some 4,000 acres. In northern California, the much larger Kincaid Fire spread across 22,000 acres a day later.