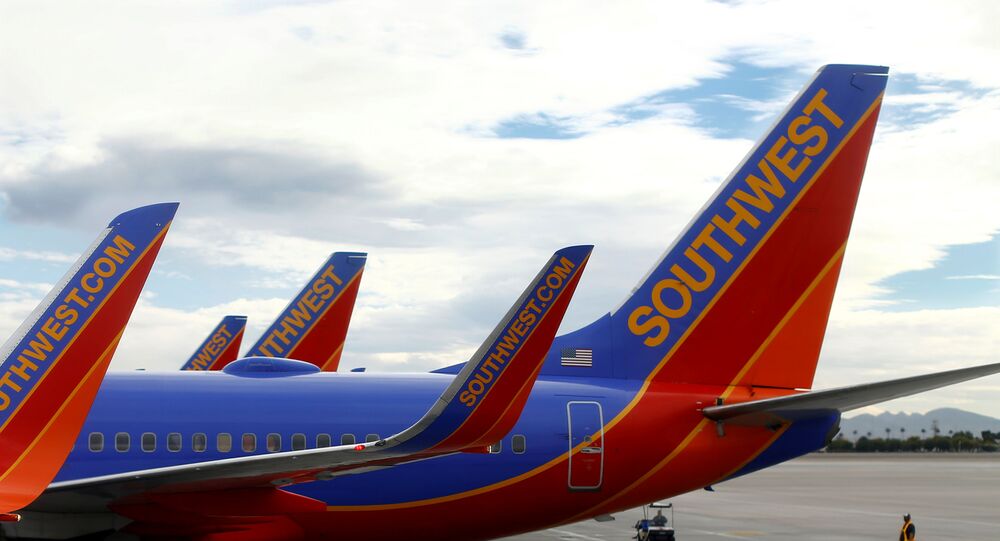 Flying Voyeurs? US Pilots Accused of Spying on Passengers in Bathroom

The flight attendant who accidentally uncovered the alleged “lavatory livestreaming” has now sued the airline, accusing the company of retaliation.

A Southwest Airlines flight attendant allegedly caught two of the carrier’s pilots livestreaming a video from their plane’s restroom, The Arizona Republic reports.

According to the newspaper, the flight attendant has now sued the airline which she accuses of retaliation following her reporting the incident.

The court filing cited by the media outlet reveals that the flight attendant, Renee Steinaker, was working on a flight between Pittsburgh and Phoenix on 27 February, 2017, when the pilot, Capt. Terry Graham, asked her to come to the cockpit so he could visit the restroom, as company policy required two crew members to stay at the cockpit at all times.

When Steinaker entered the cockpit, she allegedly spotted an iPod fitted on the windshield, with a live stream of “what appeared to be Graham in the bathroom” on the screen, and took a photo of it with her cellphone to document the incident.

The co-pilot, Ryan Russel, appeared panicked when he noticed Steinaker making this discovery and allegedly attempted to persuade her that it was a new top-secret security measure.

"They led her to believe that she and others had been filmed — had been videotaped if you will — while they were using the lavatory. It's really hard to imagine a more outrageous kind of conduct," said Ronald L.M. Goldman, aviation attorney representing Steinaker.

The flight attendant also alleged that when the plane landed, the pilots violated airline protocol and "disembarked, leaving the aircraft unattended by piloting staff”, with Graham leaving “a loaded firearm unattended in the cockpit, a violation of FAA regulations."

When Steinaker and other crew members reported this incident to the carrier, she was allegedly told not to talk to anybody about it, and was warned that "if this got out, if this went public, no one, I mean no one, would ever fly our airline again."

The lawsuit further alleges that Steinaker then “faced retaliation through stalking, being monitored by managers in a ‘threatening and bizarre manner’ and being subjected to an increased number of performance audits”.

"In my view, Southwest Airlines has treated this as 'how dare they report it' rather than 'thank you for letting us know,'" Goldman remarked.

In response, a representative of the airline said in an emailed statement cited by the newspaper that “Southwest does not place cameras in the lavatories” of their aircraft and that they “have no other comment on the pending litigation".