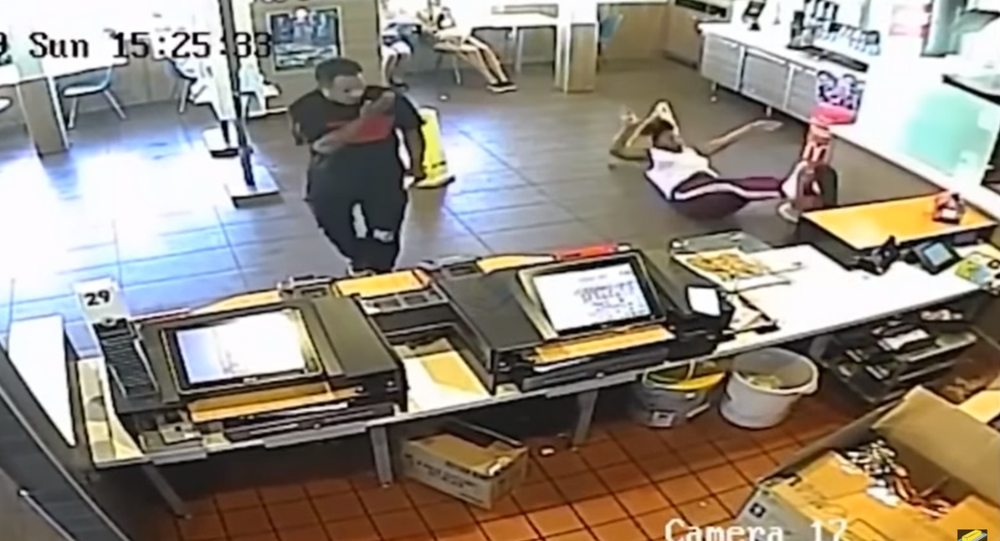 Newly obtained surveillance footage has given much-needed insight into a late September clash between a McDonald’s manager and a customer, who was left with a broken nose and a shattered cheekbone after being struck with a piece of kitchenware.

Footage recently obtained and publicly released by local Ohio news station WLWT5 initially shows customer Britany Price entering the Colerain Township restaurant in an effort to have her drive-thru order corrected. However, after more than 20 minutes of waiting and not being given the correct order or a refund, things are seen escalating to a whole new level.

With Price fuming about the lack of customer service while standing at the front counter, video shows the disgruntled customer removing things from her Happy Meals and chucking them toward Nashawnda Johnson, a manager at the eatery.

Having been struck with a chocolate milk carton, an apple juice bottle and then all of Price’s bagged items, Johnson reacted, grabbing the closest item and flinging in Price’s direction.

But what was that item, you wonder? Well, it turned out to be a blender, which connected with the left side of Price’s face and sent her tumbling backward onto the ground.

“I wanted to get some Happy Meals and some cheeseburgers and that was a very unhappy day for me,” Price told WLWT, adding that the September 22 altercation has led to multiple doctor appointments.

“I’ve had surgery. I’ve had a lot of doctor’s appointments, the follow-up. Hard mornings, hard afternoons.”

However, when asked whether she wished things had gone down differently, Price told the station that she didn’t believe it would have changed the situation. “I feel like even if we would have just went verbal back and forth that it still would’ve escalated to something else,” she said.

Johnson has also spoken out about the altercation, telling WLWT that it’s been “rough,” since the series of events ultimately led to her dismissal from the company, which had employed her for more than 10 years.

The dismissed manager went on to offer additional details of the confrontation. According to Johnson, the incident occurred at a busy time in the day, as the restaurant was going through a shift change, and Johnson had been working in the back to verify the restaurant's funds for her shift when Price was heard yelling out several expletives.

Johnson got pulled into the heated situation after her general manager, Karen, ordered her to cease the cash verification protocol and handle the matter. Although Johnson says she explained to Price why cashiers weren’t able to process her refund, and that she had in fact begun to do so herself, the matter turned into a food fight after she decided to bring her general manager into the confrontation.

"As me, walking away from the register, going to the back, she just started assaulting me from the back. She threw a chocolate milk and hit me in the head with it as I had my back turned. So I turn around. Here come the apple juice. Hit me in the face,” Johnson recalled to the station.

“All the Happy Meals and the brown paper bags. She just started going crazy … So every action has a reaction. So while I'm getting assaulted, I just picked up anything that was right there and just threw it back at her."

At the time, Johnson claims, she didn’t realize that what she grabbed was one of the restaurant’s blenders. She also noted that she wouldn’t have thrown the blender had Price not opted to begin flinging food at her. “She’s the one [who] started this,” Johnson said.

No criminal charges have been filed as a result of the food battle; however, it has been reported that Price is planning to file a civil case against McDonald’s.