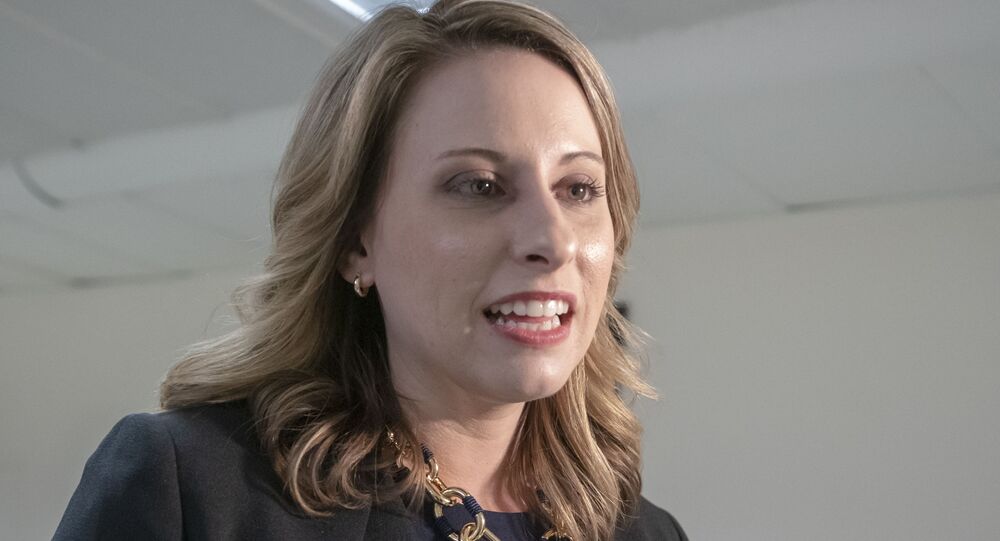 Previously, freshman Representative Katie Hill (D-Ca) made a public statement rejecting allegations that she had been involved in an improper relationship with her legislative director, Graham Kelly, blaming her estranged "abusive husband" for the controversy.

Rep. Katie Hill, D-Calif., confessed on Wednesday to having engaged in an "inappropriate" relationship with a campaign staffer, while vehemently denying an affair with her legislative director, Graham Kelly, reported Fox News citing Hill's letter to constituents.

The freshman Representative, who is the vice-chair of the House Oversight Committee tasked with the current impeachment inquiry launched by Democrats against President Donald Trump, has also vowed to cooperate with the House Ethics Committee in its newly launched investigation.

According to Fox News, Hill acknowledged that in the final years of what she has described as an "abusive marriage" she embarked on a relationship with the unnamed campaign staffer.

"I know that even a consensual relationship with a subordinate is inappropriate, but I still allowed it to happen, despite my better judgment. For that, I apologize. I wish nothing but the best for her, and hope everyone respects her privacy in this difficult time," the congresswoman reportedly wrote in the letter quoted by the outlet.

Hill, who defeated Republican Representative Steve Knight in 2018 in her district, and is now facing several GOP rivals in her 2020 congressional campaign, added she was going through a divorce from an abusive husband who sought to humiliate her.

As she repeated her denial of an affair with a congressional staffer, Hill insisted she was "fully and proactively cooperating with the Ethics Committee."

Earlier on 23 October, the Ethics committee announced it was opening a probe in response to a RedState report on the congresswoman.

"The committee is aware of public allegations that Representative Katie Hill may have engaged in a sexual relationship with an individual on her congressional staff, in violation of House Rule XXIII, clause 18(a)," Committee Chairman Ted Deutch, D-Fla., and Ranking Member Kenny Marchant, R-Texas, wrote.

Last week, RedState reported that Hill, who is openly bisexual, had developed a "long-term sexual relationship" with an unnamed staffer from her congressional campaign, who ultimately entered into a "throuple" with Hill's husband, Kenny Heslep.

The three of them, according to the outlet's sources, had taken vacations together.

The conservative blog offered screenshots of several alleged text messages between Hill and the staffer, as well as intimate pictures, including a nude photo of Hill.

According to the messages, the congresswoman ended the three-person affair earlier this year, citing a need to focus on her work and to avoid the "political risk" factor.

RedState also intimated the congresswoman had been having an affair with Graham Kelly, her legislative director and former campaign finance director, for at least a year.

Hill's estranged husband, Heslep, was said to have shared his screenshot of a text message between him and a friend who had heard about the affair, which he later deleted from his Facebook account.

According to RedState, the alleged affair was why Heslep subsequently filed for divorce.

Hill has lambasted what she referred to as a "smear campaign" against her, saying it "will not get in the way of the work" that she is doing in Congress and her constituency.

"I am disgusted that my opponents would seek to exploit such a private matter for political gain. This coordinated effort to try to destroy me and people close to me is despicable and will not succeed. I, like many women who have faced attacks like this before, am stronger than those who want me to be afraid."

"Intimate photos of me and another individual were published by Republican operatives on the Internet without my consent. I have notified Capitol Hill police, who are investigating the situation and potential legal violations of those who posted and distributed the photos."

Hill also brushed away allegations that she had been having an affair with Graham Kelly as false, saying:

"I am saddened that the deeply personal matter of my divorce has been brought into public view and the vindictive claims of my ex have now involved the lives and reputations of unrelated parties."

There has been no official comment from Kenny Heslep or Graham Kelly.