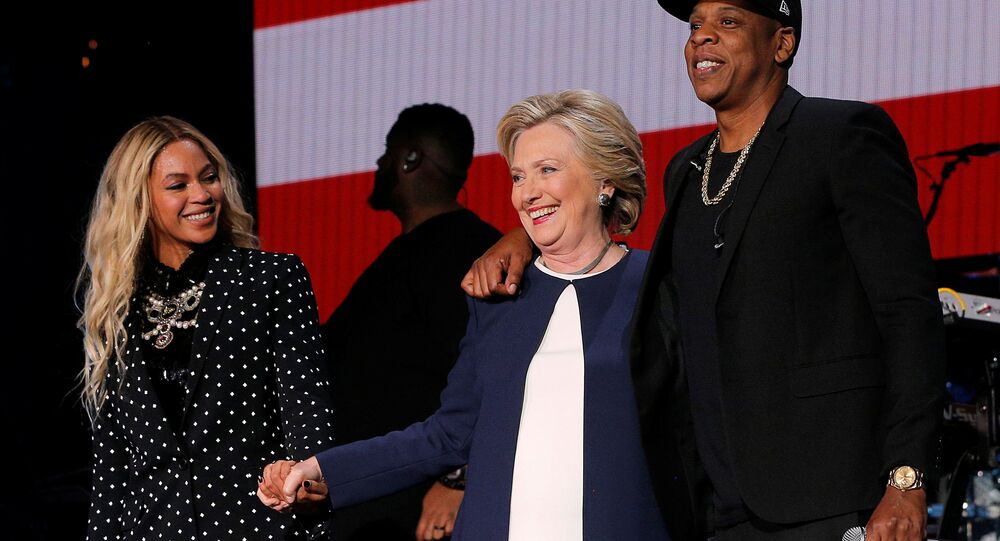 As the US presidential primaries are to be held from February to June 2020, rumours are running high if Hillary Clinton will indeed enter the fray at the last minute, with even POTUS Trump welcoming her to do so provided she “explains her misdemeanours".

Hillary Clinton has added fuel to speculations over her rumoured next attempt to occupy the White House by posting a suggestive quote from pop diva Beyonce. “Power’s not given to you. You have to take it", the former first lady posted from the singer's “Halo” on Instagram expressing her approval in the caption:

“@Beyonce speaks the truth", Clinton wrote alongside the hashtag #GutsyWomen — an homage to her new children’s book, which she authored jointly with her daughter.

The backlash that ensued was really overwhelming.

“Lives are taken and you ignored their cries", one wrote purportedly referring to the wars waged by the US in the early 2000s.

Another asked to clarify why Clinton is so keen on pondering “Russia assets”, in a nod to the ongoing Clinton-Tulsi Gabbard feud.

“When did ALL of your opponents become Russian agents? Quite a shocking coincidence. I'd appreciate knowing when this conversions happened!” the user posted.

“So you don't believe in Democracy?” A different user asked cheekily, with another weighing in saying “you both [Clinton and Beyonce] are ignorant twats".

While some described the approach as “totalitarian", another dwelled on abuse of power and corruption issues:

“And you have stolen yours", another commented. “Corruption is your power".

However, there were also those who delicately praised Clinton for catering to Beyonce’s fanbase’s interests, with users leaving room for irony and even suggesting the singer could take power:

“I hope Beyonce is the first woman president!” one woman said.

Many comments were, meanwhile, centered round the rumours of Clinton potentially running again for the presidency - something that Clinton herself has recently teased.

“Foreshadowing?” one curious netizen wondered, with another butting in in response to “taking power”:

Her remarks on the PBS NewsHour furthered speculation, as the former secretary of state told the outlet that she could “obviously” beat Trump “again".

“Maybe there does need to be a rematch. I mean, obviously, I can beat him again", she said. “But, just seriously, I don’t understand. I don’t think anybody understands what motivates him, other than personal grievance, other than seeking adulation".

Separately, The New York Times reported the other day, citing a few sources in the Democratic camp that Clinton had shared with them she would have run in the 2020 race if she thought she could win it.

Political commentator and former Bill Clinton adviser Dick Morris said Sunday that there is a chance the former secretary of state will launch a new presidential bid.

“I think it’s always possible that Hillary runs", Morris said during an appearance on The Cats Roundtable over the weekend. “You know, John, there’s a test you can do at home. Just put your fingers on her wrist, and if you feel a pulse, you know she’s going to run".

Trump, for his part, also weighed in on the debate, suggesting in a tweet earlier this month that “Crooked Hillary” should join the race “to try and steal it away from Uber Left Elizabeth Warren” as long as she explains “all of her high crimes and misdemeanors including how & why she deleted 33,000 Emails AFTER getting ‘C’ Subpoena!”

If the rumours are substantiated, Clinton may arguably rely on Beyonce, as her tweet is not the first time she has courted the Grammy-winning pop star to boost her political chances. In 2016, in Ohio, Beyonce delivered an emotional speech in support of the then-Democratic nominee:

“We have to vote. The world looks to us as a progressive country that leads change. Eight years ago, I was so inspired that my nephew, a young black child, could grow up knowing his dreams could be realised by witnessing a black president in office", Beyoncé said dwelling on the diversity issue. “And now, we have the opportunity to create more change. I want my daughter to grow up seeing a woman lead our country and know that her possibilities are limitless".

“We have to think about the future of our daughters, of our sons, and vote for someone who cares for them as much as we do", she rounded off stressing:“And that is why, ‘I’m with her'".