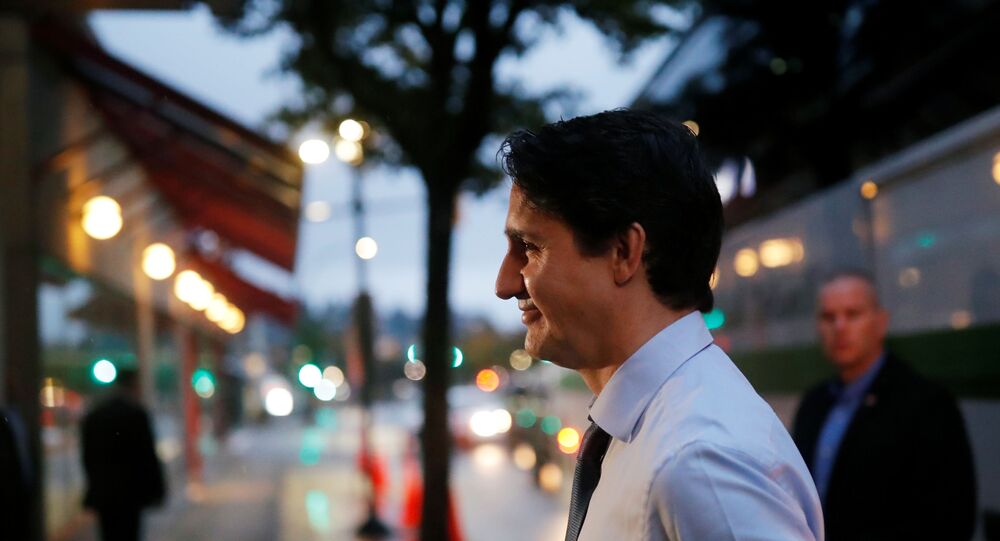 The chances of Canada’s current prime minister repeating and improving on his father's record of being the third-longest serving PM have recently become slimmer amid scandals overlapping with his failures to fulfil some of his earlier election promises. But Trudeau's fight is still far from lost.

Most of the recent pre-election polls in Canada have indicated that the chances of the Liberal Party, led by incumbent Prime Minister Justin Trudeau, winning a majority in the country's House of Commons have dropped from 63% to 21%. The polls have also shown that both the Liberal Party and its key rivals, the Conservative Party, led by Andrew Scheer, are expected to garner a comparable amount of the votes in the election on 21 October.

The sudden drop in support for Trudeau and his party comes after a series of recent scandals that have plagued the prime minister. Namely, longstanding allegations of inappropriate pressure on Attorney General Jody Wilson-Raybould to help drop accusations of corruption against the major Quebecois engineering company SNC-Lavalin could potentially have contributed to the fall in Trudeau's support.

At the same time, polls have not indicated that the unearthing of pictures of the prime minister wearing blackface at a 2001 Arabian Nights-themed party had such a negative impact. The incident sparked numerous racism accusations against Trudeau, who has portrayed himself as a progressive liberal.

Nelson Wiseman, a professor of political science at the University of Toronto, also noted that the SNC-Lavalin scandal has had a much greater impact on Trudeau and the Liberals' ratings than the racism allegations against the prime minister, as the latter doesn't involve government corruption.

The prime minister's record during his term in office could have a double-edged impact on his and his party's election performance. The most indicative of this is how inconsistently he has followed his progressive environmental agenda – while Trudeau passed a carbon emissions tax, he at the same time approved the construction of the Trans Mountain Pipeline, a project harshly criticised by environmentalists.

Trudeau's supporters could still mobilise and vote for him in light of his other achievements, such as sustained economic growth, which, however, has varied from 0.5% to 3% per year, as well as resolving trade disputes with the US.

The Liberal Party and Trudeau's key opponents in the election are the Conservative Party, led by Andrew Scheer, and the New Democratic Party (NDP), led by Jagmeet Singh.

Scheer's programme is very much the opposite of Trudeau’s. While the latter advocates increased government spending on healthcare and other social benefits, the Conservative leader stands for a balanced budget and eliminating the deficit, which reached $14 billion this year, amid a total GDP of around $1.7 trillion. Both Scheer and Trudeau, however, stand for cutting taxes.

Singh's NDP, on the other hand, being slightly to the left of the more centrist Liberals, is probably the key threat to Trudeau's party, as it could attract those who are disappointed by either the prime minister's performance or the scandals haunting him and who therefore want to defect. According to polls, the NDP's recent rise in the ratings has apparently come at the expense of both the Liberals and Conservatives.

Professor Wiseman noted that it's hard to make any predictions with certainty, since many factors could change the situation in favour of any of the parties. He also suggested that there is a 95% likelihood that the new government in Canada will be a minority one.

"It is challenging to predict which party will win more seats because there are smaller parties. Much will depend on the vote splits in the individual constituencies. My guess is that the Conservatives may win a few more seats than the Liberals", he said.

Despite the Liberals and Conservatives polling at roughly equal levels, the tide could still turn in Trudeau's favour due to the peculiarities of the Canadian electoral system. The country is divided into 338 constituencies, called ridings, and each of them sends only one representative to the House of Commons.

These representatives are determined according to a first-past-the-post system, meaning that they don't need an absolute majority in their ridings, but rather a simple majority is enough. Considering that Trudeau is polling strongly in urban areas, which consist of numerous ridings, he and the Liberals have a solid chance of taking advantage of this system.

Ironically, though, Trudeau and his party initially vowed to abolish this system, which could now help them win the 2019 election. Professor Nelson Wiseman noted that the election reform that the Liberal Party abandoned is unlikely to be revived after the October election.

"The Liberals abandoned electoral reform because they know that if Canada moves to a proportional system, their party is highly unlikely to ever win a majority again. [They] promised electoral reform when they were the third party. There is absolutely no chance of the Liberals reviving this promise", he said.

Trudeau Gets Obama’s Endorsement for Reelection Ahead of Canadian Vote