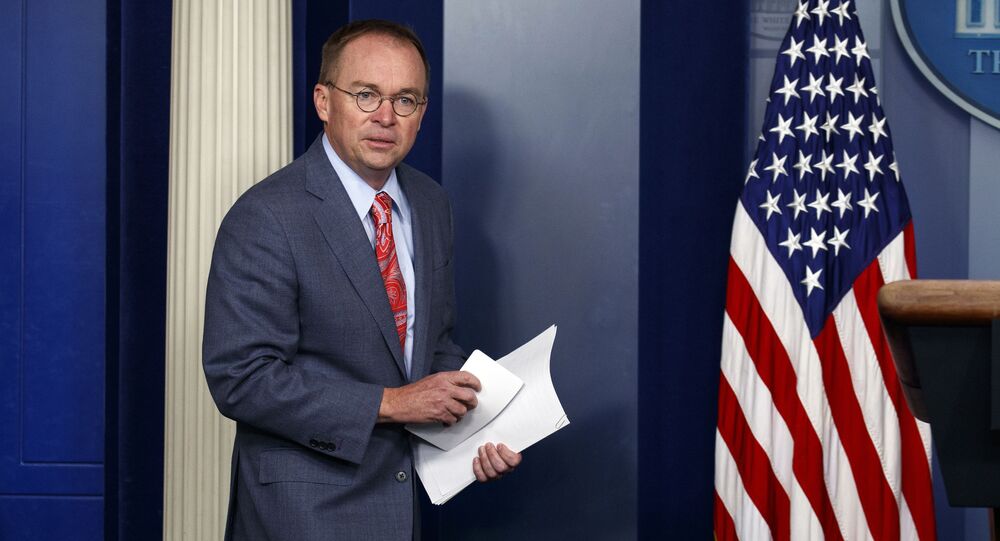 The role of chief of staff has traditionally been one of the most important in the White House and the most problematic in the Trump administration, with three different people already having held the post during his time in office. Mick Mulvaney is currently the acting White House chief of staff.

Acting White House Chief of Staff Mick Mulvaney is reportedly facing the threat of being ousted as efforts were made to find a potential replacement for him, later interrupted by an impeachment inquiry against Donald Trump, CNN reports citing multiple sources familiar with the matter.

The outlet reports that Donald Trump’s senior adviser and son-in-law Jared Kushner was among several of the US president’s aides reaching out to new candidates to fill the position prior to Nancy Pelosi’s announcement of the impeachment inquiry on 24 September, but these claims have not been supported by administration officials.

In a statement sent to CNN, the White House deputy press secretary Judd Deere said that Mike Mulvaney's "standing in the White House has not changed" and "he is still the acting chief of staff and has the President's confidence".

Mulvaney, who hasn't been awarded the formal title of Assistant to the President and Chief of Staff since John Kelly's departure in January 2019, has filled the role in an "acting" capacity. He came under renewed scrutiny last week after he said and then denied that Trump’s decision to withhold aid to Ukraine was due to a quid pro quo demand for an investigation into Ukraine’s potential involvement in the hacking of Democratic Party emails during the 2016 elections.

It was also previously reported by CNN that Donald Trump was frustrated with Mulvaney’s lack of strategy to defend against a whistleblower complaint that led to the impeachment inquiry and his unclear response to the questions about Ukraine posed during last week’s briefing.

"To be clear, what you described is a quid pro quo" -- Mick Mulvaney just admitted in a briefing that Donald Trump held up aid to Ukraine as leverage to get the Ukrainian government to investigate Democrats and the 2016 election: pic.twitter.com/HHxzlkoJcS

​A formal impeachment inquiry against the US president was launched by the Democratic-controlled House of Representatives in late September, following a whistleblower complaint alleging that Donald Trump had abused his power to pressure Ukrainian President Volodymyr Zelensky into investigating rival presidential candidate Joe Biden’s involvement in Ukraine’s internal affairs. Donald Trump vehemently denied the allegations, while the Ukrainian president later said that he had not been “pushed” into anything.

Mulvaney also sparked criticism last week when he announced that the next G7 summit would be held at one of Donald Trump’s properties, which some argued was a breach of US law. Donald Trump later reversed his decision in light of outrage from the public.

Although Mulvaney, who was previously the Director of the Office of Management and Budget, may still be in hot water, no support for his dismissal has been found.