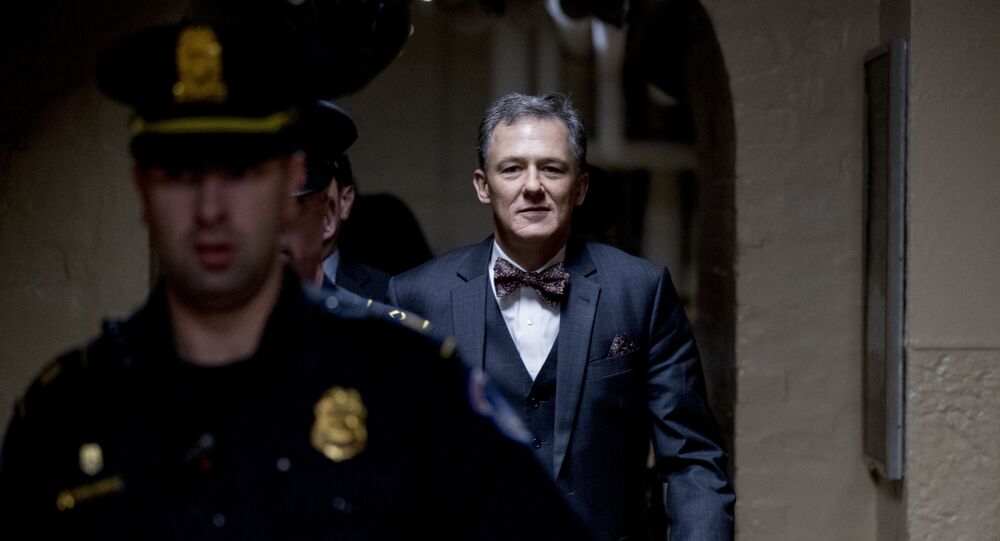 A deputy assistant secretary of state has told congressmen in private that he was alarmed by White House efforts to remove the-then US ambassador to Ukraine.

The Trump administration replaced the diplomats in charge of its Ukraine policy with a trio of trusted officials just weeks before prematurely recalling its ambassador to Ukraine, a senior State Department official told the lawmakers investigating President Trump on Tuesday.

The official, George Kent, deputy assistant secretary in the European and Eurasian Bureau at the State Department, said in a closed-door deposition that the reshuffle was announced at a meeting organised by acting White House Chief of Staff Mick Mulvaney on 23 May.

Before assuming his current post, Kent served as the deputy chief of the US embassy in Kiev between 2015 and 2018. His testimony to House investigators was recounted to reporters by Rep. Gerald Connolly, a Democrat sitting on the Oversight and Reform Committee, one of the several panels leading the Trump impeachment inquiry, who was present at the hearing.

According to Connolly, Kent testified that he did not attend Mulvaney’s meeting, but that department officials were told afterward that then-Special Envoy for Ukraine Kurt Volker, Ambassador to the EU Gordon Sondland, and Energy Secretary Rick Perry – who called themselves the “three amigos” – were announced as the new chiefs of the Ukraine policy.

George Kent reportedly testified that he was ordered to “lay low” and focus on the other countries in his portfolio, while deferring to the trio on matters regarding Ukraine.

Kent said that there had been a “parallel process that he felt was undermining 28 years of US policy in promoting rule of law in Ukraine,” Connolly recalled. “And it was wrong. And he used that word: wrong.”

The impeachment inquiry focuses on Donald Trump’s dealings with Ukraine and stems from an August whistleblower complaint by an intelligence officer, who suggested that Trump may have pressured Ukraine’s president, Volodymyr Zelensky, to investigate corruption allegations against Joe Biden – Trump’s potential 2020 rival – and his son Hunter, who had worked for a local energy company.

Joe Biden, the former vice president, is known to have successfully pushed in 2016 for the sacking of the Ukrainian prosecutor general who was dealing with corruption in the firm that employed Hunter.

The Democrats suspect that Trump had abused his power to solicit foreign interference in the US election – which they say is an impeachable offence. The president has freely admitted that he wanted Zelensky to investigate the Bidens but insists that he was acting lawfully and put no pressure on his counterpart.

Democratic congressmen, who are controlling the lower house, have subpoenaed over half a dozen US officials for depositions and requested documents relating the probe from the White House, the Pentagon and Vice President Mike Pence. The White House has refused to cooperate because it sees the investigation to be  illegitimate; one of the arguments is that the House has yet to hold a full vote to authorise the impeachment inquiry, which Speaker Nancy Pelosi says is not required.

All “three amigos” Kent mentioned in his deposition have been subpoenaed to appear in Congress; Volker has already been interviewed by House investigators, while Sondland’s testimony is scheduled for Thursday.

Recently-released text messages between Sondland, Volker and other diplomats, as well as Donald Trump’s personal fixer Rudy Giuliani, have revealed that they were effectively serving as intermediaries around the time Trump urged Zelensky to investigate the Bidens.

“He was pretty detailed in talking about some of the shady characters Giuliani was dependent on for misinformation,” Gerry Connolly told reporters.

Yovanovitch was tough on Lutsenko, who was eventually fired for corruption; according to Kent’s account, Lutsenko wanted to get rid of the US ambassador and persuaded Giuliani (and, hence, Trump) that she would be a problem. Lutsenko claimed that Yovanovitch had given him a “do not prosecute” list to shield the Bidens from Ukrainian investigators.

Kent told his colleagues in an email that the list was phony: “One key sign of it being fake is that most of the names are misspelled in English — we would never spell most that way,” he wrote.

Instead, Kent suggested, the list was an effort by Lutsenko to “inoculate himself for why he did not pursue corrupt associates and political allies.”

In her testimony to congressmen last week, Yovanovitch stated she had been removed from her post because of a “concerted campaign” by Rudy Giuliani based on “unfounded and false claims.”

“I do not know Mr. Giuliani’s motives for attacking me,” she said, “but individuals who have been named in the press as contacts of Mr. Giuliani may well have believed that their personal financial ambitions were stymied by our anti-corruption policy in Ukraine.”

Giuliani has refused to comply with a congressional subpoena for Ukraine-related documents, while two of his associates were arrested last week and charged with campaign finance law violations.