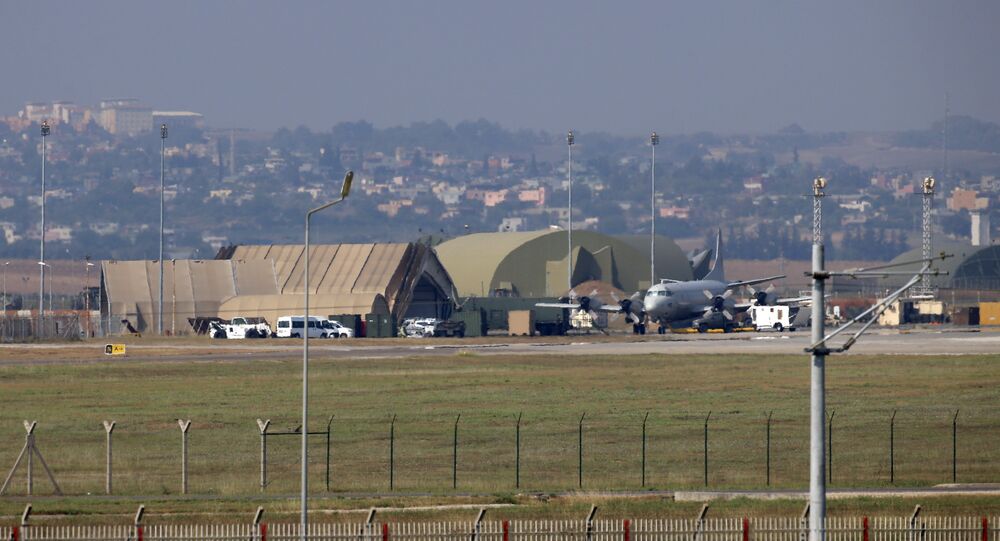 Much-Debated US Nukes at Turkish Base: Lukewarm Plans to Finally Be Put Into Action?

The American nuclear bombs believed to be stored at Turkey's Incirlik Air Base - a fact chewed over by the media without any official confirmation - seem to no longer be a guarantor of peace between the two NATO allies, but rather a relic of history.

Per a New York Times report citing two unnamed American officials, over this past weekend, State and Energy Department officials were “quietly reviewing plans” to evacuate about 50 tactical nuclear weapons that the United States is thought to have long stored at Incirlik Air Base in Turkey, roughly 100 miles from the Syrian border.

The report quoted senior officials as saying that the bombs had become Tayyip Erdogan’s hostages, so that their removal from the shared, US-Turkish base would virtually be the end the of the Turkish-American alliance.

There has notably been no confirmation from the US or NATO authorities about the said nuclear warheads indeed being stationed at the base.

Meanwhile, in an email to the Air Force, Times spokesperson Ann Stefanek said there had been no change to daily operations at the base.

The wording of The New York Times report - the “review” of the plans –points to the fact of the move having been largely on the table for quite some time.

•         Although B61 nuclear gravity bombs are viewed as a Cold War relic with no operational function in the event of a war, a number of NATO allies, including Turkey itself earlier rooted for leaving them in place as a symbol of US defence assistance.

•         Under Obama, there was considerable debate on how to handle the nukes in Turkey in line with the debated disarmament agenda as well as over security concerns in light of the 2016 coup attempt in Turkey, media reports said.

The security issue became exceptionally acute after the base was found to have been used in a plot, reportedly by a general who at some point sought protection from the Americans, which was ultimately denied. The base was feared to potentially become a theatre of war, after Erdogan’s government cut off electricity there before taking action against the suspected plotters.

•         When the US again brought up the issue of nukes stored on Turkish soil, the country's diplomats reportedly struck back arguing the country would develop its own in response – something which would violate the terms of the nuclear non-proliferation treaty that Turkey is a signatory to.

•         As early as last month, Erdogan brought up the issue again, apparently implying Turkey would not oppose the move this time. He declared at a party rally that it was “unacceptable” that Turkey had committed to having no arsenal, asserting that “every developed nation” has it. Separately, threats to close the Incirlik Air Base were voiced after the US State Department noted in July 2019 that President Donald Trump and Secretary of State Mike Pompeo were “examining all of the options in the CAATSA [Countering America's Adversaries Through Sanctions Act] legislation over Turkey’s purchase of Russian S-400 missile systems".

•         Donald Trump has never spoken out on the Turkish base and the US nukes supposedly stationed there. Yet, in December 2016, the NATO nukes storage issue was brought upon, after the-then president-elect Trump said that his country "must greatly strengthen and expand its nuclear capability". The US had earlier announced that the B61-12 type of tactical nuclear gravity bomb is expected to replace the extant B61-3, B61-4, B61-7, and B61-10 bombs by the mid-2020s.

•         Retired Divisional Admiral Türker Ertürk, former head of the Turkish Naval Academy, commented at the time, that the withdrawal of the weapons from Turkish soil would be possible only after a large-scale agreement on nuclear disarmament is signed between the US and Russia, which is quite improbable given Trump's recent remarks.

The situation with Turkey, a NATO ally, has grown to be increasingly volatile as Turkish forces tore into northeastern Syrian in proximity to the border after the announcement of the withdrawal of US forces. The latter created a force majeure for the Kurdish-led Syrian Democratic Forces (SDF) who have heavily relied on US assistance since the start of the Syrian campaign, and over the weekend had to shift their attention to a new alliance with the Syrian Army.

As the Turkish offensive entered its second week, its position among NATO allies has come under strain, with France, Germany, Finland and Norway unilaterally revoking their military export contracts with Ankara.

At a meeting on Monday, EU foreign ministers agreed to follow the countries’ suit in ceasing arms sales while denouncing Turkey for undermining “the stability and security of the whole region, resulting in more civilians suffering”. The international community voiced deep concern over the Turkish incursion, dubbed “Peace Spring”, for fears it may lead to the re-insurgence of Daesh*, now largely held in captivity by the Kurds, who the Turks refer to as “terrorists” related to the PKK banned by Ankara.

Erdogan, having heard the allies’ reaction, vowed to let Daesh on the loose and let them flood Europe, if the countries continue to call the offensive “an invasion".

The announcement of the US troop withdrawal came straight after a phone call with Erdogan, in which Trump reportedly pledged not to “stand” in Turkey's way, however soon thereafter, Trump shared he had been working with both aisles of the US Congress to hit Turkey with "powerful" sanctions over its military operation.

After the Turks started their incursion, POTUS threatened to destroy the Turkish economy if Ankara acts in Syria "off-limits", prompting the Turks to hit back, arguing Turkey must ban the US from using the Incirlik Air Base.