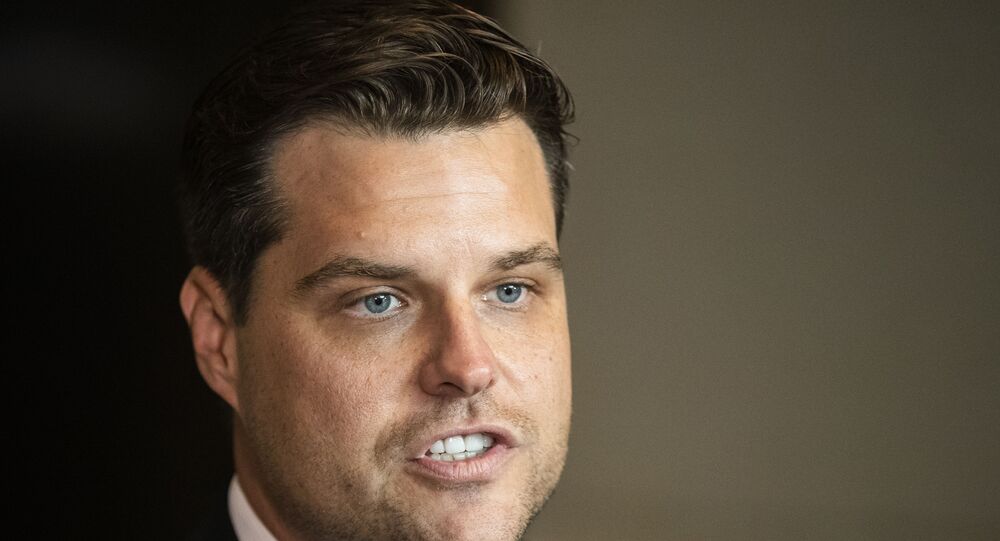 Rep. Matt Gaetz was asked to leave on Monday when he tried to sit in on the testimony of a former top National Security Council expert on Russia as part of the House impeachment inquiry into US President Trump.

The Republican Rep. expressed his disappointment to reporters, angered with “selective leaks” by House Intelligence Committee Chairman Adam Schiff, and questioned why he was not allowed to be present during Hill’s testimony. Gaetz outlined that the chairman of the House Judiciary Committee, Rep. Jerry Nadler, was involved in the impeachment inquiry, unlike Gaetz.

“It’s not like I’m on agriculture,” Gaetz said. “What are the Democrats so afraid of?”

He later lashed out in a tweet, calling the impeachment inquiry a “kangaroo court” and using one of Trump’s favourite nicknames for the intelligence committee chairman, “Shifty Schiff.”

Judiciary Chairman @JerryNadler claimed to have begun the impeachment inquiry weeks ago. Now, his own Judiciary members aren’t even allowed to participate in it.

And yes - my constituents want me actively involved in stopping the #KangarooCourtCoup run by Shifty Schiff. https://t.co/vfWQfZmDi4

Gaetz is not the only Republican who has been disappointed with Schiff and his handling of the impeachment inquiry. Rep. Jim Jordan also lashed out at the California Democrat on Monday for excluding some congressional Republicans from the testimonies and for leaking “cherry-picked” information from the closed-door hearings to the press.

“She was going to come voluntarily but he's going to subpoena her I believe so he can ask certain questions and again keep those secret except for the certain things that he wants to leak, the cherry-picked information to the American people,” Jordan said of Schiff before Hill’s testimony.

Lee Wolosky, Hill’s attorney, tweeted on Monday that the former deputy assistant to the president had received a congressional subpoena.

Our client, Dr. Fiona Hill, former Dep Asst to Pres, received a congressional subpoena, will comply and answer questions from Members this morning starting at 10 AM.

On 24 September, House Democrats initiated an impeachment inquiry against Donald Trump, accusing him of abuse of power and compromising US national security and the country's electoral system. The Trump administration subsequently informed Congress that it would not cooperate with the inquiry, describing it as an attempt to overturn the results of the 2016 election.

However, Trump’s Ambassador to the European Union Gordon Sondland later defied an order to not cooperate with the investigation and met with congressional representatives last week, despite having earlier refused to do so.

The inquiry was launched based on a whistleblower complaint in relation to a 25 July phone call between Donald Trump and Ukrainian President Volodymyr Zelensky, claiming that the POTUS had threatened to withhold military aid to Ukraine if Kiev failed to probe alleged illegal business activities of Joe Biden’s son Hunter in the country. Donald Trump denied any wrongdoing and accused House Democrats of waging a political witch hunt.