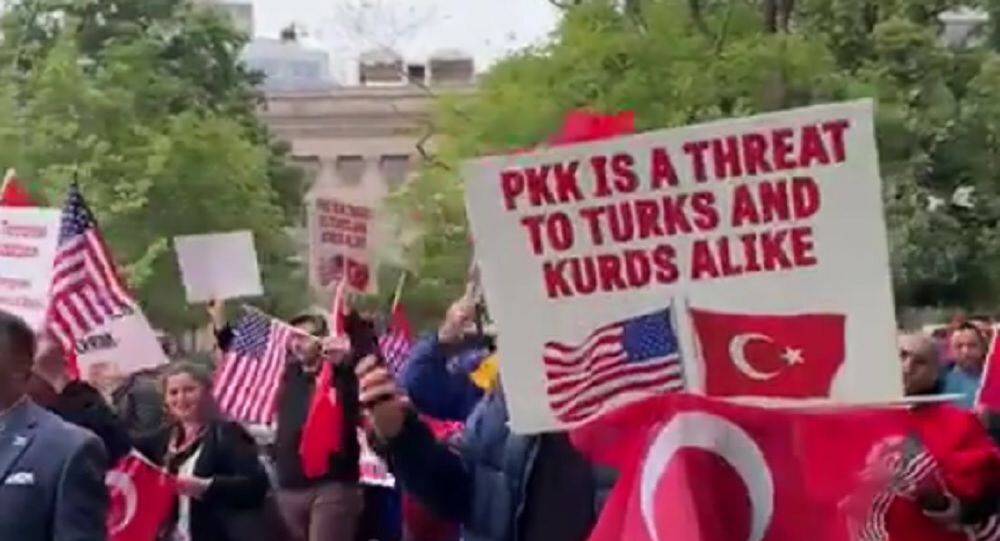 Dozens of people on Sunday gathered in the vicinity of the White House in Washington DC to protest the Trump administration's stance on the ongoing Turkish military offensive in northern Syria.

The Turkish Ambassador to the United States, Serdar Kılıc, tweeted video from the rally, declaring, "When it is 10 thousand kilometers away from the country 10 thousand times growing Turkish people's homeland, nation, flag and love".

Dozens of protesters dressed in national Turkish colors and carried Turkish national flags while chanting "PKK - terrorists", calling for the US to recognize the military invasion by Ankara into Syria.

Washington earlier threatened to impose "powerful" economic sanctions against Ankara for the military attacks in Syria against the Kurdish-led autonomy.

The Kurdish-led forces - predominantly the Syrian Democratic Forces (SDF) - control vast zones of the northern part of Syria, although Ankara has designated the Kurdistan Workers' Party (PKK) and their affiliated YPG and SDF as terrorists.

Ankara declared that its Syrian invasion is intended to clear border areas in order to create a so-called safe zone that would be used to return millions of Syrian refugees who fled their homes over the course of the ongoing 8-year Syrian civil war.

'Operation Peace Spring' has been condemned by the international community.

Turkish Foreign Minister Mevlut Cavusoglu said earlier that his country's ground and air military invasion was launched "in accordance with international law, Article 51 of the UN Charter and UN Security Council Resolutions on the fight against terrorism".