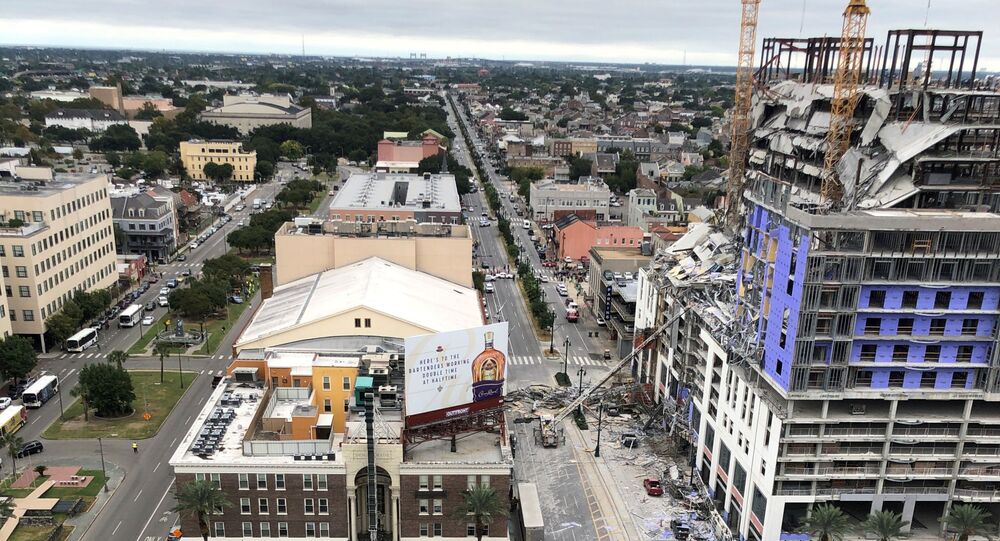 At Least One Dead, Several Missing After Hard Rock Hotel Under Construction Collapses in New Orleans

Several were injured and at least one person died after a hotel under construction with about 45 people working at the site partially collapsed. Three people are reportedly still missing and nearby buildings have been evacuated.

The upper floors of the under-construction building started to fall on top of each other and then one of the walls of the Hard Rock Hotel fell to the ground. According to preliminary data, one person died as a result of the collapse and 18 more were injured. They have been transported to local hospitals, and their condition is stable now.

Three people are reportedly still missing and are going to be searched for using drones and dogs. The web-outlet Nola cites a worker as saying that about 45 people were inside when the building collapsed. Police and emergency services are working at the scene.

MY GOD... The Hard Rock hotel under construction in New Orleans collapsed, deaths & many people unaccounted for. Witness video is unreal. Praying for families of those affected, and all first responders! Crazy man... 😔 #NOLA pic.twitter.com/brQ68KA8V2

“We’re praying for the individuals who remain unaccounted for. It is not proper to say at this point that they are trapped, because we don’t know that, although they may be,” governor of Louisiana John Bel Edwards said.

Photos and videos of the tragic incident have appeared online. When the under-construction Hard Rock Hotel in New Orleans collapsed, vehicles and a streetcar dodged the debris falling down from the site, as footage captured from inside a streetcar shows. However, there are no reports of anyone on the street being injured.

As the under-construction Hard Rock Hotel in New Orleans collapsed, vehicles and a streetcar dodged debris falling down from the construction site as captured from inside a streetcar.

According to New Orleans Fire Department Superintendent Tim McConnell, it was the upper six to eight floors of the building that collapsed. What is left of the building is said to still be very unstable, so buildings nearby have been ordered to be evacuated as a new collapse is possible, according to the authorities.

“Our biggest fear right now is the crane, it’s 270 foot. So the reach of that crane, if it were to come down has a tremendous amount of weight on it,” he said.

At the scene of Canal and Rampart where the Hard Rock Hotel collapsed. NOPD has roped off the block from car and foot traffic. pic.twitter.com/0hmS0ZY6dk

​The cause of the collapse remains unclear. According to local media, Florida-based Hard Rock International’s plans to construct the 17-storey building with hotel rooms and condos were revealed in February 2018 after years of controversy. The project is similar to one by developer Praveen Kailas that was approved in 2011. It allowed adding extra height, although there was a 21-metre-limit for buildings in the area.

The developer was imprisoned before the construction began, and later the project was passed on to another member of his family. Their company eventually reached a deal with Hard Rock.