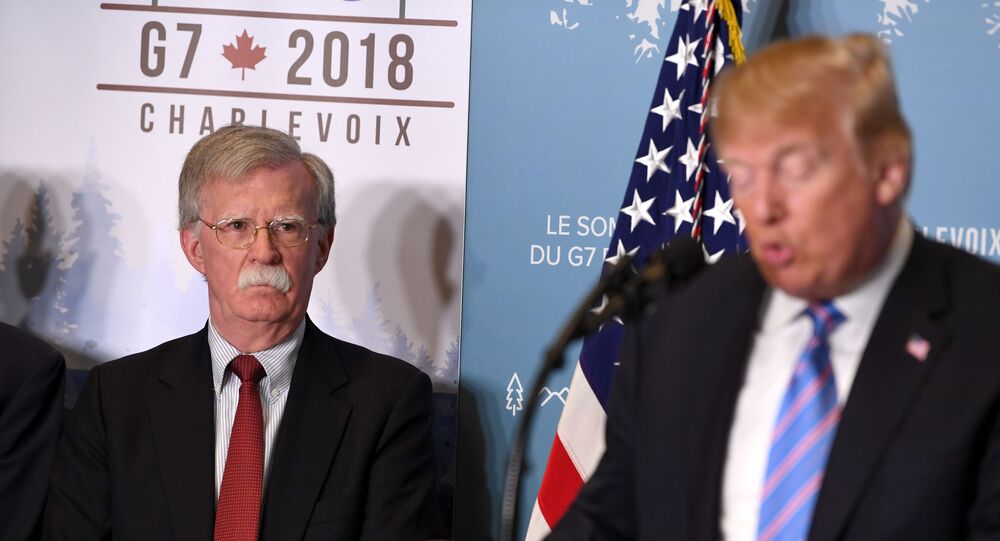 'Ballistic' Bolton, Others Scrambling to Do Something About Trump's Ukraine Call - Reports

The July talk with Volodymyr Zelensky landed in the Democrats’ crosshairs fuelling an impeachment inquiry after a whistleblower, alleged to have had ties with a Democratic 2020 candidate, launched a complaint. However, contrary to the accusations, a newly uncovered memo suggests no military aid was mentioned, ruling out quid pro quo allegations.

‘Alarm Bells Were Kind of Ringing’

The article assumed that given the “timing and the nature” of the previously reported discussions with National Security Council legal adviser John Eisenberg, the first warnings had arrived before the controversial phone talks, while it was in the aftermath of the call that concerns soared. At the time, Bolton and Trump’s close circle supposedly “scrambled to obtain a rough transcript that was already being 'locked down' on a highly classified computer network".

“When people were listening to this in real time, there were significant concerns about what was going on — alarm bells were kind of ringing", said one person familiar with the sequence of events, who, like all the rest, addressed the sensitive issue on the condition of anonymity, noting: “People were trying to figure out what to do, how to get a grasp on the situation".

Previously, in a broader discussion in which White House officials were reportedly encouraging Ukraine to continue its work to eliminate corruption in the country’s energy sector, Gordon Sondland, the US ambassador to the European Union and one in charge of ties with Kiev, thundered that there were also “investigations that were dropped that need to be started up again", according to a US official familiar with the matter. Senior officials grasped Sondland’s statement to be a reference to Burisma, Hunter Biden’s Ukrainian employer earlier probed on corruption charges. “Bolton went ballistic” after the meeting, the official commented.

Meanwhile, it is not immediately clear if the individuals who had complained to John Eisenberg were the same ones (at least some of them) who talked to the whistleblower, an alleged CIA official who launched a complaint over the content of the phone call prompting formal anti-Trump impeachment proceedings, which POTUS branded Thursday “a Democrat scam".

According to the WaPo report, one official who had listened to the call “immediately” went to Eisenberg, with at least two more following suit by the end of the next day, allegedly having heard the call or seen the rough transcript of the conversation.

On Wednesday night, CBS published a memo allegedly authored by the whistleblower whose move spurred US President Donald Trump’s impeachment inquiry. The memo, later turned over to congressional investigators, suggested that its author, who has not been publicly identified but referred to by the Washington Examiner as one who could have had “professional” ties with a 2020 Democratic candidate, was contacted by a White House official on the afternoon of the 25 July Trump-Zelensky conversation. The complaint lays out many of the concerns that White House officials were reported to have shared with Eisenberg and others in the weeks prior to the 25 July phone call.

The memo outlines the actual transcript of the call released earlier in September, but adds some assertions and assessments.

According to the whistleblower, the White House official was “visibly shaken by what had transpired” and described the call as "crazy", "frightening", and "completely lacking in substance related to national security". However, the memo notes there was no mention of security assistance or the threat of military funds being withdrawn in the phone call - the key argument used by Democrats to launch an impeachment inquiry. They accused President Trump of threatening to cut aid to Ukraine (which POTUS actually did in May) if Kiev doesn’t provide assistance in investigating the dealings of former Vice President Joe Biden and his son in Ukraine, where Hunter was employed as a board member of natural gas company Burisma Holdings.

The Trump administration, meanwhile, is refusing to cooperate with the impeachment inquiry and has been blasting the Democrats’ attempts to move forward with it. On Tuesday, the White House told US Ambassador to the European Union Gordon Sondland, a key witness in the probe, not to appear at a scheduled interview with a congressional committee - “a kangaroo court", as it was labelled by Trump in justification of the White House’s decision. Trump denies wrongdoing and accuses House Democrats of persisting with a purely political campaign against him, calling the inquiry a new round of "witch hunt garbage" over the "perfect" exchange with his Ukrainian counterpart that, per the transcript, contains no signs of his overtly threatening Ukraine with military aid withdrawal in exchange for a political favour.

'Don’t Want Him at the White House!': Trump Lashes Out at Warriors Head Coach Kerr