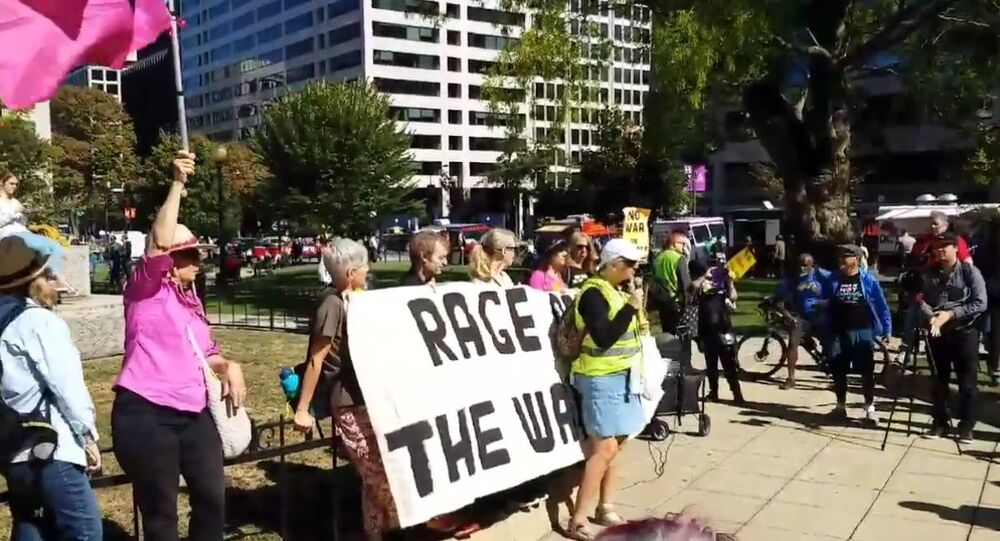 Protesters March in DC Demanding Halt to US 'War Machine'

WASHINGTON (Sputnik) - Dozens of protesters gathered in downtown Washington on Friday to raise their voices against the US war machine and urge President Donald Trump to stop sending troops to other countries.

The March Against the War Machine began near the White House before participants stopped at other landmarks in the capital, including the International Monetary Fund and the World Bank headquarters, the Washington Post and other locations.

"We are marching for peace and social justice", the lead organizer of the rally, Cindy Sheehan, said. "We want the US Empire gone, because it is the most destructive force around the world".

"I left @TheDemocrats in 2007 because they refused to end the wars," Cindy Sheehan said at @WomenMarch4Paz in DC. "They told me if you help us get elected, we'll help you end the war ... they betray every movement, they are the death of movements." pic.twitter.com/7w8F3VPOz1

Sheehan explained her reasons to fight against the war machine very simply: her son Casey was killed in Iraq in 2014. "The war machine is still working", she said.

A similar march last year near the Pentagon drew hundreds of protesters, in part because it was held on a Saturday. Organizers said that while Friday's rally was more compact, participants hoped to attract more attention from everyday Americans on a work day downtown.

"We are hoping to reach a lot of people and even to influence them", Sheehan said. "We spend a lot of money for war every day, but we do not have normal healthcare, education, we have over 1 million homeless people".

.@bymyelf reading an open letter to @realDonaldTrump at @WomenMarch4Paz in front of the White House. "Presidents so rarely back up their words with their deeds ... the endless wars have to end." pic.twitter.com/GGbrY22KjK

Protesters signed an open letter that they sent to US President Donald Trump via his favorite social media - Twitter.

"The United States can not survive so long the war machine exists in its present form", they said.

Many of the protesters carried homemade posters calling for an end to oppression, particularly in Iran.

"Stop the war at home and abroad," one sign said. "No war in Iran," said another placard.

On Saturday, the rally's organizers plan to conduct an anti-imperialism summit at a church in Washington. Activists from the Women Against Military Madness movement are expected to discuss efforts to fight imperialism, women's role in stopping the war and other issues.