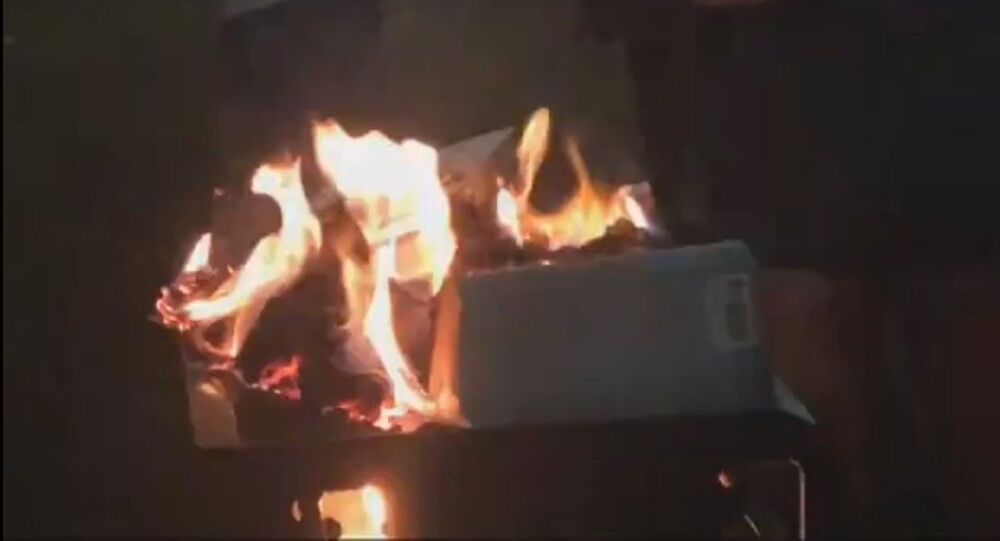 Video: US Students Hold Book Burning After Being Asked to Reflect on White Privilege

Students at Georgia Southern University participated in an archaic demonstration earlier this week to showcase their disagreement with an author who spoke at the school and challenged them to examine the societal benefits associated with race in the US.

University of Nebraska-Lincoln professor and author of “Make Your Home Among Strangers” Jennine Capó Crucet received harsh backlash from students at Georgia Southern University and is even being called a racist after obliging the school’s request to hold a seminar.

Crucet spoke to students Wednesday night at the school’s Performing Arts Center and expounded on a number of topics related to her self-inspired novel, which follows a Hispanic girl’s struggles to navigate a prestigious, predominantly white university.

“Make Your Home Among Strangers” was required reading for some students who participated in the “First Year Experience” (FYE) course.

Students from the school, which reportedly has a student body that is 62% white, 26% black, 5% Hispanic and 2% Asian, openly expressed their disdain for Crucet’s comments on white privilege and stories about her personal experience at Cornell University during the lecture’s Q&A session.

“I noticed that you made a lot of generalizations about the majority of white people being privileged,” said one student, according to The George-Anne, the school’s student-run newspaper. “What makes you believe that it’s okay to come to a college campus, like this, when we are supposed to be promoting diversity on this campus, which is what we’re taught? I don’t understand what the purpose of this was.”

Crucet responded to the student and explained that white privilege in the US is a “real thing that you are actually benefiting from right now in even asking this question.”

“What’s so heartbreaking for me and what is so difficult in this moment right now is to literally have read a talk about this exact moment happening, and it’s happening again. That is why a different experience, the white experience, is centered in this talk,” she added.

The school paper noted that despite several students walking out of the lecture, many stayed and asked Crucet questions about her experience and perspective as a Latina. The author later thanked those “very amazing and brilliant” individuals on Twitter.

Also want to say: I met some very amazing, brilliant students at @GeorgiaSouthern tonight. Many of them were the ones disrupting the aggressive & ignorant comments during the Q&A. At the signing, we hugged & cried. I‘m happy to know them and also legit worried for their safety.

Later that night, however, students on the other end of the spectrum chose to conduct a public showing of their displeasure and burned copies of Crucet’s novel.

so after our FYE book’s author came to my school to talk about it... these people decide to burn her book because “it’s bad and that race is bad to talk about”. white people need to realize that they are the problem and that their privilege is toxic. author is a woman of color. pic.twitter.com/HiX4lGT7Ci

“Students at @GeorgiaSouthern literally burning my novel. This is where we are, America.” she said in a Wednesday tweet.

John Lester, the school’s vice president of communications, condemned the actions in an email to The Hill and said the "book burning does not align with Georgia Southern’s values nor does it encourage the civil discourse and debate of ideas," but stopped short of taking any further action for the public demonstration, as he said the display was well within the students’ First Amendment rights.