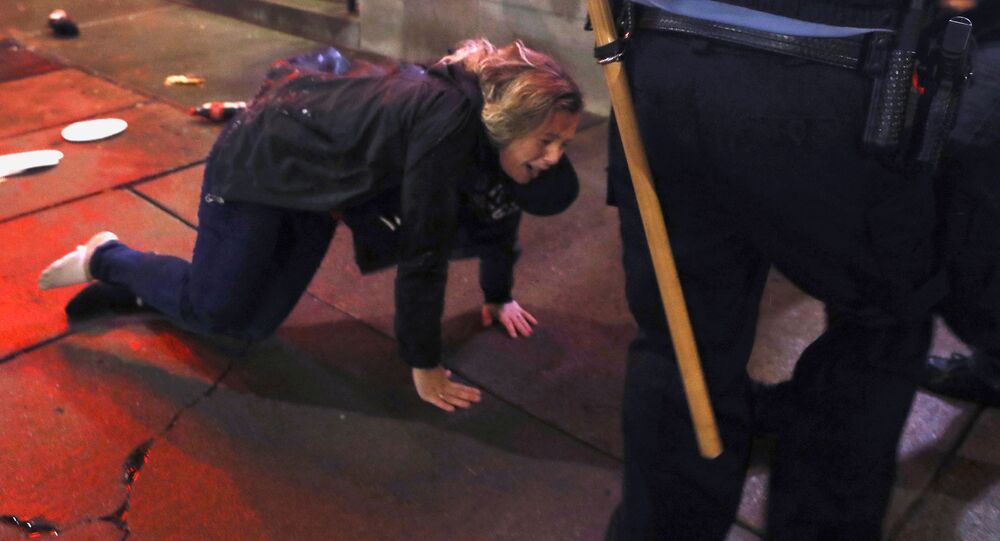 The Minnesota rally for Donald Trump came as polls indicated Americans’ growing support for the ongoing impeachment inquiry against the US President, which was initiated by the Democrats last month after Trump’s phone call with his Ukrainian counterpart Volodymyr Zelensky.

Peaceful protests against US President Donald Trump’s campaign rally in Minneapolis escalated into violence on Thursday evening with skirmishes between local police and demonstrators outside the Target Centre in the centre of the city.

A Fox News correspondent tweeted a video of protesters burning Make America Great Again (MAGA) baseball caps and other memorabilia in a show of defiance against Trump.

A separate footage by a Washington Post national correspondent showed protesters going after a man labelled as a Nazi.

In the video, the crowd is heard shouting “Nazi scum! Off our streets!”, with a Trump supporter seen being followed by protesters before someone calls out “There’s a Nazi over here”.

A man in a blue jacket seemed to be leaving the Trump rally by himself when he was spotted by a protester who yelled: “There’s a Nazi over here!” A group of protesters then attacked the man, slapping and pushing him. He finally ran away. pic.twitter.com/jzYaWgca9g

Police were seen using chemical spray, bicycles and even horses in a bid to contain protesters who reportedly dismantled part of the police barricade and threw urine at police officers.

The situation was reportedly calming down by 11:30pm local time.

During the rally, Trump reportedly praised Minnesota police officers who were not allowed to attend the rally in their uniforms, instead wearing “Cops for Trump” t-shirts.

Earlier, Trump slammed Fox News pollsters and expressed his longing for the “good old days” of the news outlet after its recent survey on impeachment revealed that more than half of the respondents support the US President’s removal.

...Court Justice & I turned him down (he’s been terrible ever since), Shep Smith, @donnabrazile (who gave Crooked Hillary the debate questions & got fired from @CNN), & others, @FoxNews doesn’t deliver for US anymore. It is so different than it used to be. Oh well, I’m President!

“From the day I announced I was running for President, I have never had a good a Fox News poll. Whoever their pollster is, they suck,” he tweeted on Thursday.

During the call, part of which was released as a transcript, Trump is accused of pressing Zelensky to investigate 2020 Democratic presidential candidate Joe Biden and his son Hunter, while threatening to withhold US military aid to Ukraine.

Trump, in turn, denies the allegations as a new instance of “witch hunt garbage,” describing his phone call with Zelensky as a casual and absolutely "normal" one.