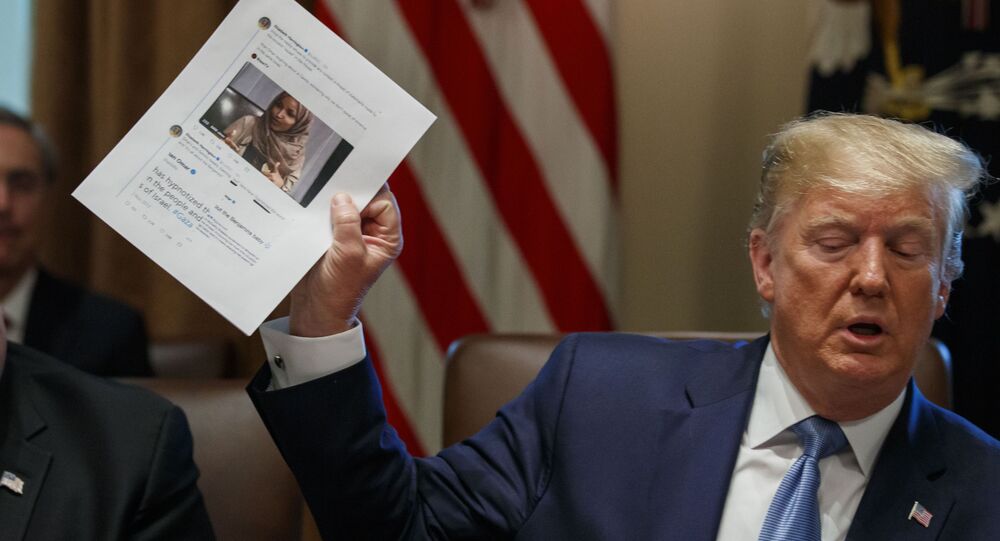 Earlier this year, Democratic Congresswoman Ilhan Omar tweeted that “no one person – no matter how corrupt, inept, or vicious – can threaten my unwavering love for America.”

During a rally in Minneapolis on Thursday, US President Donald Trump specifically took aim at Minnesota Congresswoman Ilhan Omar, slamming her as “an America-hating socialist”.

“She minimised the September 11th attack on our homeland, where far more than 3,000 people died, saying, 'some people did something’”, Trump said.

He was referring to the remarks made by Omar in April, which Republicans claimed had minimised the 9/11 attack and its consequences.

At the time, Trump joined the criticism by posting a tweet reading "We will never forget!" (in all caps), accompanied by a video montage of Omar's remark, intertwined with footage of al-Qaeda-hijacked planes ramming into the World Trade Center's twin skyscrapers.

Commenting on her remarks during her interview with CBS back then, Omar said that “any Americans found themselves now having their civil rights stripped from them, and so what I was speaking to was the fact that as a Muslim, not only was I suffering as an American who was attacked on that day, but the next day I woke up as my fellow Americans were now treating me as a suspect”.

“How do you have such a person representing you in Minnesota? She is a disgrace to our country,” Trump said, adding, “I'm very angry with you people right now.”

Omar quickly responded by tweeting that Trump “shouted xenophobic conspiracy theories about me” and that he “scolded my district for voting for me”.

At his rally just now, Trump called me an “America-hating socialist” and a “disgrace.” He shouted xenophobic conspiracy theories about me. He scolded my district for voting for me.

His hate is no match for our movement. Stand with me by donating now: https://t.co/QdUrT9zJsr pic.twitter.com/Ik8I9zlRTf

"His hate is no match for our movement," she added, urging people to donate to her re-election campaign.

One of the first two Muslim women elected to US Congress, Omar has repeatedly rejected allegations about her anti-American sentiment, lambasting the Trump administration over its policy on refugees.

In April, she pledged in a tweet to “stand undeterred to continue fighting for equal opportunity in our pursuit of happiness for all Americans.”

“No one person – no matter how corrupt, inept, or vicious – can threaten my unwavering love for America. Thank you for standing with me – against an administration that ran on banning Muslims from this country – to fight for the America we all deserve,” she pointed out.

Omar is a member of a quartet of newly elected congresswomen, including Alexandria Ocasio-Cortez, Ayanna Pressley, and Rashida Tlaib, which is often referred to as "The Squad" and which harshly criticise Trump’s immigration policies.