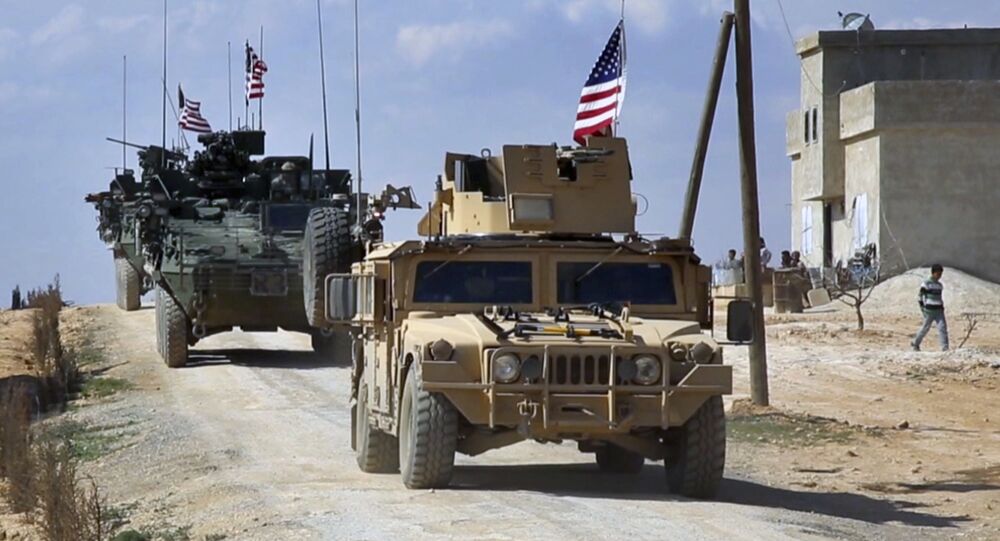 Commenting on Washington’s recent move to pull US troops out of northern Syria on Monday, President Trump tweeted that the time has come to get US out of “ridiculous endless wars.”

Yahoo News has cited an unnamed senior Trump administration official as saying that US media reports about the Pentagon being “blindsided” by the White House’s intent to pull out American troops out of northern Syria hold no water.

“That surprises me that anyone would say that, because this is something that was discussed among senior leadership here at the White House, the State Department and the Pentagon. I don’t know how anyone could have been blindsided,” the official noted.

They declined to elaborate on which officials in the US administration discussed the withdrawal and who agreed on the decision.

“I’m not going to get into each and every one of the people that the president discussed these issues with, but he discussed them with his senior advisers in […] defence, diplomatic and […] his staff here at the White House,” the official added.

They suggested that the “blindsided” comment could have been made by angry government employees.

“Sometimes people that don’t have the need to know or that aren’t part of the decision chain may be a little disappointed that they weren’t part of it and may call their friends in the press and tell them that they’re blindsided,” the official said.

WH Officials Reveals Details of US Troop Withdrawal From Syria

They claimed that Trump moved to withdraw US troops from northern Syria after he learned that Turkey was “intent” on staging “some sort of military operation in the Arab country. The official confirmed that the US doesn’t support Turkey’s military operation.

“The president made it very clear publicly and privately that the United States does not endorse or support any Turkish operation in northern Syria. There’ll be no U.S. armed forces involvement or support of any operation that the Turks undertake”, the official said.

They added that the pullout, which “does not constitute a withdrawal from Syria,” involves troops  stationed only in a “relatively small 20-to-30-mile” region.

“We have a small number — 50 to 100 special operators in the region — and they should not be put at risk of injury, death or capture in the event that the Turks do come over the border and engage […] in combat with the local Kurdish forces”, the official said.

The remarks come after Fox News and NBC News quoted unnamed top Pentagon officials as saying that they were “completely blindsided” and “shocked” by the White House’s order to withdraw US troops from northern Syria.

This followed US President Donald Trump stating on Twitter Monday that it is time for US troops to leave Syria and "ridiculous Endless Wars" behind.

Turkey’s President Recep Tayyip Erdogan, for his part, confirmed that US troops began pulling out of northern Syria as Ankara plans to launch an anti-terrorist operation against Kurdish forces in the area.

After insisting that the US military should fight only where it is in the country's interest, "and only fight to win", Trump further elaborated that if Ankara does anything he considers "off-limits", he will "totally destroy and obliterate the economy of Turkey." Turkish Vice President Fuat Oktay responded by warning that Turkey is “not a country that will be moved by threats.”

.....good health, at my request, Pastor Brunson, who had many years of a long prison term remaining. Also remember, and importantly, that Turkey is an important member in good standing of NATO. He is coming to the U.S. as my guest on November 13th. #ENDENDLESSWARS

Shortly after, Trump softened the rhetoric, touting Turkey as an important trading partner that is “good to deal with”. On the US troop withdrawal from northern Syria, Trump said that Washington is in “no way” abandoning the Kurds.

Late last week, Erdogan announced that Ankara is due to launch an offensive in northern Syria in the coming days to clear the border area from Kurdish forces, including the US-backed Kurdish People's Protection Units (YPG). Ankara sees YPG as an affiliate of the Kurdistan Workers' Party (PKK), blacklisted as a terrorist organisation in Turkey.

Erdogan also vowed to establish a safe zone and ensure the safe return of millions of refugees currently living in Turkey. In the latest development, Turkey announced on Tuesday that preparations for a major military operation in northern Syria are complete.

The decision was followed by the White House announcing that US troops would withdraw from the area and that Washington would not back Ankara’s military operation.