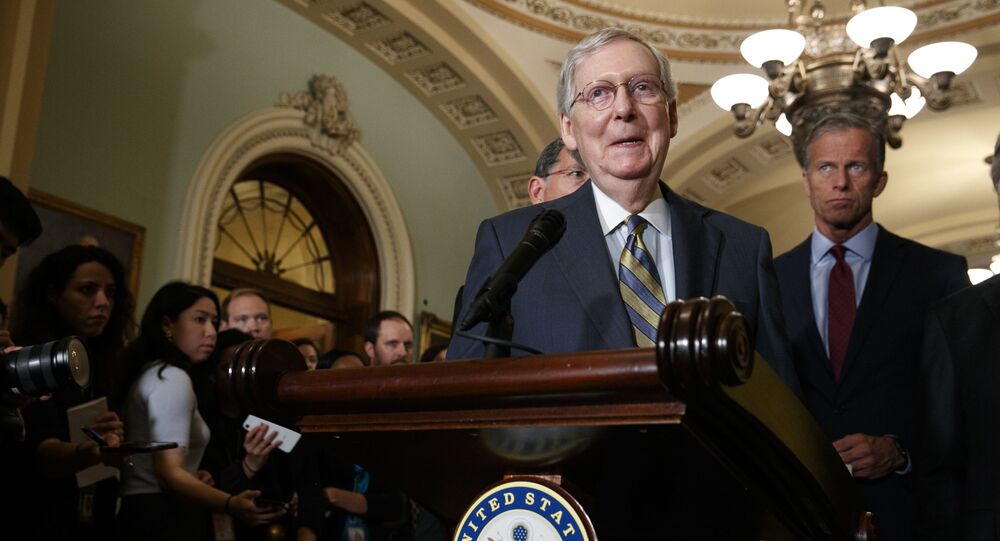 Donald Trump’s dramatic turnaround on Syria, which has already been condemned by Democratic lawmakers, is being strongly criticised by loyal Republicans as well, in a rare show of bipartisanship at a time when US politics are witnessing a sharp partisan divide.

Some of President Trump’s staunchest allies on Capitol Hill have distanced themselves from the president’s recent decision to withdraw US troops from positions in north-eastern Syria – a move they are concerned would clear the way for an imminent Turkish operation against the US-backed Kurdish militias in the area.

Senate Majority Leader Mitch McConnell said in a statement that the US pullback from northern Syria would increase the risk of a resurgence of terrorism and could “seriously risk damaging Turkey’s ties to the United States”.

He added: “As we learned the hard way during the Obama Administration, American interests are best served by American leadership, not by retreat or withdrawal.”

House Minority Leader Kevin McCarthy said he wanted to “make sure we keep our word for those who fight with us and help us.” “If you make a commitment and somebody is fighting with you, America should keep their word," he told Fox & Friends.

In a series of tweets, Senator Lindsey Graham criticised Trump’s move as being unwise. “No matter what President Trump is saying about his decision, it is exactly what President Obama did in Iraq, with even more disastrous consequences for our national security,” he said, adding that the US would slap bipartisan sanctions on Turkey and call for its suspension from NATO should it attack the Kurdish fighters in Syria.

Senator Marco Rubio, in turn, called the decision “a grave mistake that will have implications far beyond Syria” and embolden Iran to “escalate hostile attacks.”

If reports about US retreat in #Syria are accurate, the Trump administration has made a grave mistake that will have implications far beyond Syria.

Senator Mitt Romney, the 2020 Republican presidential candidate, labelled it as a “betrayal” that would undermine America’s credibility and lead to “another humanitarian disaster” in the region.

The President’s decision to abandon our Kurd allies in the face of an assault by Turkey is a betrayal. It says that America is an unreliable ally; it facilitates ISIS resurgence; and it presages another humanitarian disaster. https://t.co/Tu8ARa8Pmp

Nikki Haley, who served as US ambassador to the United Nations, said that “the Kurds were instrumental in our successful fight against ISIS in Syria. Leaving them to die is a big mistake.”

We must always have the backs of our allies, if we expect them to have our back. The Kurds were instrumental in our successful fight against ISIS in Syria. Leaving them to die is a big mistake. #TurkeyIsNotOurFriend

Brett McGurk, Trump’s former envoy to the Global Coalition to Defeat ISIS, accused the US president of sending military personnel “into harm’s way” and leaving US allies “exposed when adversaries call his bluff or he confronts a hard phone call”.

Donald Trump is not a Commander-in-Chief. He makes impulsive decisions with no knowledge or deliberation. He sends military personnel into harm’s way with no backing. He blusters and then leaves our allies exposed when adversaries call his bluff or he confronts a hard phone call.

Liz Cheney, a daughter of former Vice President Dick Cheney and House Republican Conference Chair, said it was “a catastrophic mistake” to withdraw US forces, adding that “this decision ignores the lesson of 9/11. Terrorists thousands of miles away can and will use their safe-havens to launch attacks against America.”

Withdrawing US forces from Northern Syria is a catastrophic mistake that puts our gains against ISIS at risk and threatens US security.

This decision ignores lesson of 9/11. Terrorists thousands of miles away can and will use their safe-havens to launch attacks against America.

The White House announced on late Sunday that it would withrdaw forces from north-eastern Syria ahead of an expected Turkish attack on the allied Kurdish militias, who have fought alongside Americans against Daesh and other terror groups.

Trump, who campaigned on a promise to withdraw the United States from costly military operations, stood by his decision, saying “it is time for us to get out of these ridiculous Endless Wars, many of them tribal, and bring our soldiers home.”

In a later tweet, he threatened to “destroy and obliterate” Turkey's economy if it does something he considers “off limits”.

His announcement followed a call with Turkish President Erdogan a day after the former said the Turkish army would soon launch a military operation east of the Euphrates in Syria, in an area mainly controlled by Kurdish fighters.

The US-led coalition has been fighting Daesh* in Syria and Iraq since 2014, despite not being authorised either by Syria's government or the United Nations. In December 2018, Donald Trump declared victory over Daesh and ordered the withdrawal of 2,000 American troops from northern Syria.

The US-led coalition included the Kurds, who now self-administer swathes of territory in northern Syria largely independent of Syrian President Bashar Assad. Turkey views the Kurds fighting in Syria as proxies of the Kurdistan Workers' Party — a Kurdish militant and political organisation designated in Turkey as a terror group. US support for the Kurds has strained ties between Ankara with Washington over the past years.

To fix the problem, the United States and Turkey have agreed to jointly establish a 480-kilometre “safe zone” along the Syria-Turkey border that would stretch for 30 kilometres inside Syria. According to the plan, the zone would allow for the resettlement of up to two million Syrian refugees currently living in Turkey, shield the Kurdish militants, and address Turkey’s security concerns. Damascus views this plan as an act of aggression against its territorial sovereignty.

Little progress has been made over the past months, however, in regards to implementing the idea. After the end-September deadline for the project had expired, Erdogan said last week that his country had no choice but to take the matter in its own hands and launch an offensive to clear the border area of Kurdish militants and create a security zone.

Turkey has reportedly begun striking Kurdish positions in northern Syria, prompting the Kurds to seek an agreement with Damascus.