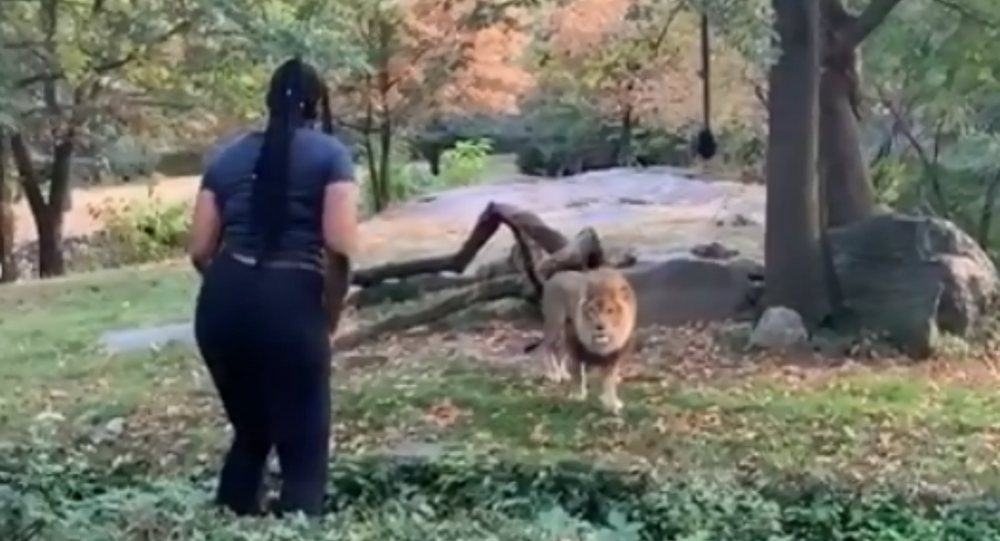 Officials with the New York Police Department are on the hunt for an unidentified woman who was caught over the weekend jumping over a visitor barrier at the Bronx Zoo in an effort to get closer to the various lions within the enclosure.

The shocking incident unfolded on Saturday and has only continued to raise questions over the woman’s motives and whether the trespass will alter how the Bronx Zoo builds its enclosures.

Video of the break-in was posted to an Instagram account that appears to belong to the trespasser herself. In the recording, the woman can be heard informing a man she’s with that she’s “about to climb over” just so she can “get closer to [the lion].”

The woman proceeds to hop over the wooden fence and into the greenery, despite the man repeatedly saying, “You’re not supposed to do that.”

“Go ahead and fall in there and see what happens,” he says just as the woman waves at two male African lions on the opposite side of a small moat.

While he’s still filming the encounter, a fellow parkgoer approaches the man, initially asking whether he knows her before urging him to have the woman return to safety. “I told her,” he responded, later stressing that the woman simply doesn’t listen to him.

The video cuts off as the woman continues to wave toward the lion. The post includes a caption that reads in part, “I have no fear of nothing breathing,” and that “only people wasn’t scared was me and the children.”

Additional footage was also shared on Instagram by Hernan Reynoso, who just happened to be standing near the exhibit as the woman began trying to get the attention of one of the big cats.

“This action was a serious violation and unlawful trespass that could have resulted in serious injury or death. Barriers and rules are in place to keep both visitors, staff and animals safe,” reads a Bronx Zoo statement issued via Twitter. “We have a zero tolerance policy on trespass and violation of barriers and are taking appropriate steps to address this incident.”

According to CBS News, both the zoo and the enclosure have remained open since the unfortunate incident unfolded over the weekend.

The Washington Post reports that a police investigation into the matter is ongoing, and that no arrests had been made in the case as of Tuesday night.

Copenhagen Zoo Puts Down Rare White Rhino for 'Its Own Good'