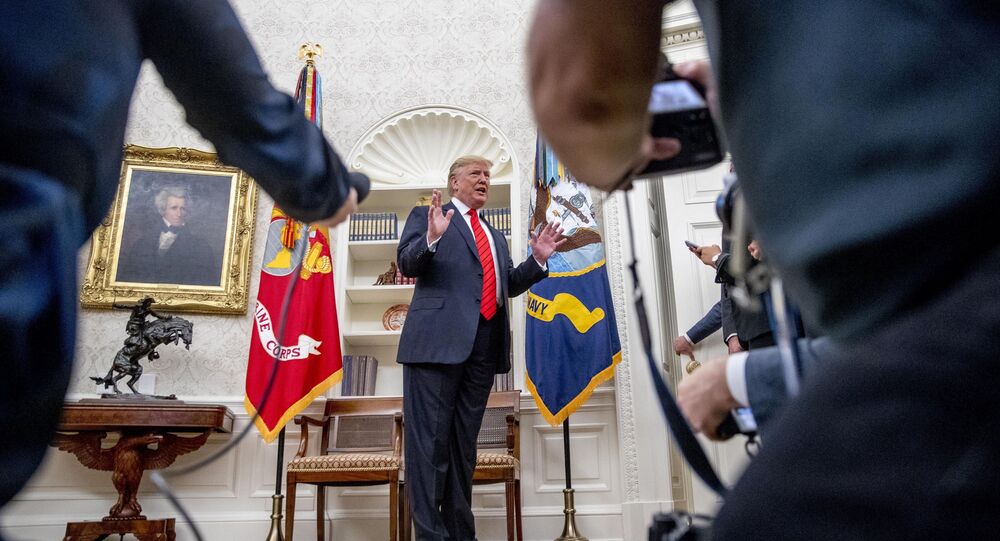 Trump earlier described the 24 September impeachment announcement, which was initiated as a response to his telephone call with Ukraine’s President Volodymyr Zelensky, as a "political witch hunt".

Former Speaker of the US House of Representatives Newt Gingrich has slammed Democrats’ drive to impeach President Trump as a coup and “a purely political process”.

Speaking to Fox News on Tuesday, Gingrich specifically pointed to House Speaker Nancy Pelosi “knowing better” when it comes to an impeachment inquiry against Trump.

“She [Pelosi] rushes out, announces, 'We're moving forward on impeachment.' They have not yet met with the whistleblower. They have not yet received the transcript of the phone call [between Trump and Ukrainian President Zelensky]. Nothing had changed except the sheer pressure of her left. And she couldn't get away from it!” Gingrich said.

Referring to the Trump-Zelensky call, Gingrich dubbed Pelosi's impeachment announcement as leeway for House Intelligence Committee Chairman Adam Schiff to put “two paragraphs in Trump's mouth that Trump never said, that Schiff himself admits he wrote and is a total lie.”

“And that sort of captures this whole process. That’s where we are right now. This is not an impeachment; this is a coup d’etat,” Gingrich said.

He was echoed by Trump, who wrote on his Twitter page that the impeachment probe aims to “take away the power of the people, their freedoms […] and their God-given rights as a citizen of the United States of America”, slamming the process as a “coup”.

The remarks came after US Secretary of State Mike Pompeo expressed concern over “aspects” of the House Committee’s request in the impeachment inquiry. He blamed Democrats for adhering to what he described as “bully”-like tactics pertaining to the investigation.

In separate developments, Republican Senator Charles Ernest Grassley said that an alleged CIA whistleblower, who voiced alarm over Trump’s call in July to Ukraine’s President, “ought to be heard out and protected”, while House Intelligence Committee Chairman Adam Schiff mentioned a tentative agreement for the unnamed whistleblower to testify before the committee. He did not elaborate.

The impeachment inquiry against Trump was announced by House Speaker Nancy Pelosi on 24 September after the US President’s reported phone call with Ukrainian counterpart Volodymyr Zelensky, part of which was released as a transcript.

During the call, Trump allegedly asked Zelensky to open an investigation in connection with Joe Biden's ostensibly pressing Kiev to end a 2016 corruption investigation of a company on whose board Biden’s son, Hunter Biden, sat.

Pelosi insisted that Trump's request to the Ukrainian President to probe Biden can be seen as a green light to meddle in the US election and that it may constitute a breach of Trump’s constitutional responsibilities, something that justifies the ongoing impeachment attempt. Trump, in turn, denies the allegations, describing the impeachment inquiry as a hoax.