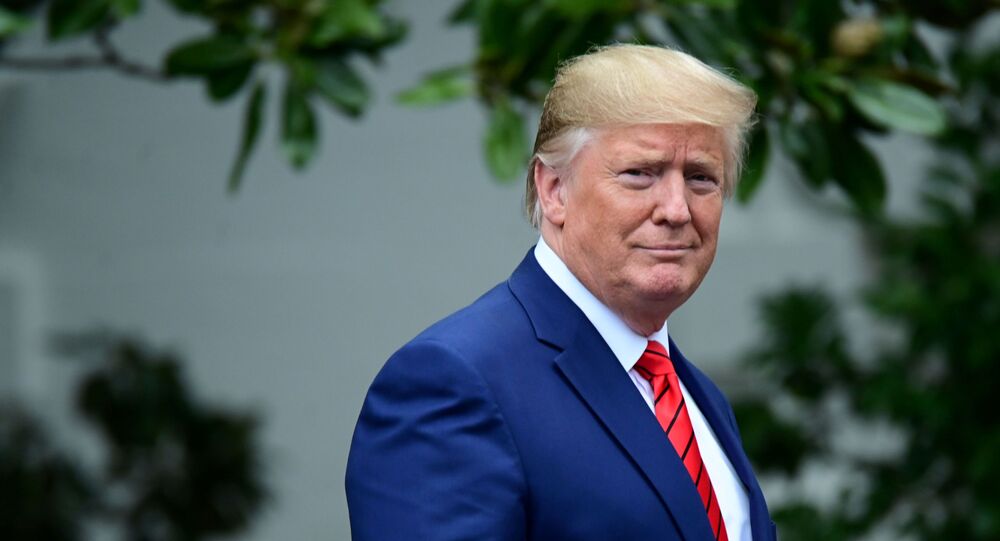 US President Donald Trump, in a recent Twitter rant, questioned the nature and source of the information presented by the whistleblower who earlier filed a report accusing him of abusing his power by requesting that Ukraine President Volodymtr Zelensky investigate US presidential hopeful Joe Biden.

Trump on Sunday claimed that he, "like every American", deserves "to meet my accuser, especially when this accuser, the so-called “Whistleblower,” represented a perfect conversation with a foreign leader in a totally inaccurate and fraudulent way."

The US president reiterated accusations against House Intelligence Committee Chairman Adam Schiff, who, as Trump put it, "made up what I actually said by lying to Congress," and demanded Schiff be investigated "at the highest level for Fraud & Treason."

His lies were made in perhaps the most blatant and sinister manner ever seen in the great Chamber. He wrote down and read terrible things, then said it was from the mouth of the President of the United States. I want Schiff questioned at the highest level for Fraud & Treason.....

Trump previously slammed Schiff for "twisting" fact during testimony regarding the US president's phone conversation with the Ukrainian president. Trump also demanded that Democrat US lawmaker Schiff resign.

"Liddle’ Adam Schiff fraudulently and illegally inserted his made up & twisted words into my call with the Ukrainian President to make it look like I did something very wrong. He then boldly read those words to Congress and millions of people, defaming & libeling me. He must resign from Congress!", Trump tweeted.

On Wednesday, Schiff acknowledged that the whistleblower complaint provided credible information and allegations.

"I found the allegations deeply disturbing. I also found them very credible [...] I want to thank the whistleblower for coming forward. I think what this courageous individual has done has exposed serious wrongdoing", Schiff said.

Continuing his verbal rant against opponents, Trump said that not only does he want to meet his accuser, "who presented SECOND & THIRD HAND INFORMATION, but also the person who illegally gave this information, which was largely incorrect, to the “Whistleblower.”"

The US president questioned whether the third party who provided what Trump considers to be "incorrect information" was "SPYING on the U.S. President," vowing 'Big Consequences.'

....In addition, I want to meet not only my accuser, who presented SECOND & THIRD HAND INFORMATION, but also the person who illegally gave this information, which was largely incorrect, to the “Whistleblower.” Was this person SPYING on the U.S. President? Big Consequences!

On Thursday, The New York Times reported that the whistleblower who filed the complaint regarding Trump's phone call with Zelensky was an officer in the Central Intelligence Agency (CIA) who was temporarily working at the White House and had returned to the CIA after the complaint was issued.

Trump now faces impeachment after a US government whistleblower claimed the president pressured Ukrainian President Volodymyr Zelenskyy during a July phone call to look into potentially tarnishing the political image of Democratic opponent Joe Biden in the 2020 presidential race.

On Wednesday, the White House declassified an unredacted transcript of the phone conversation, which confirms that Zelensky promised Trump that he would look into Biden.

US Democrats have launched impeachment proceedings against Trump, accusing him of pressuring a foreign government into assisting his re-election campaign. Trump denies any wrongdoing and has accused Democrats of launching a "witch hunt" against him.