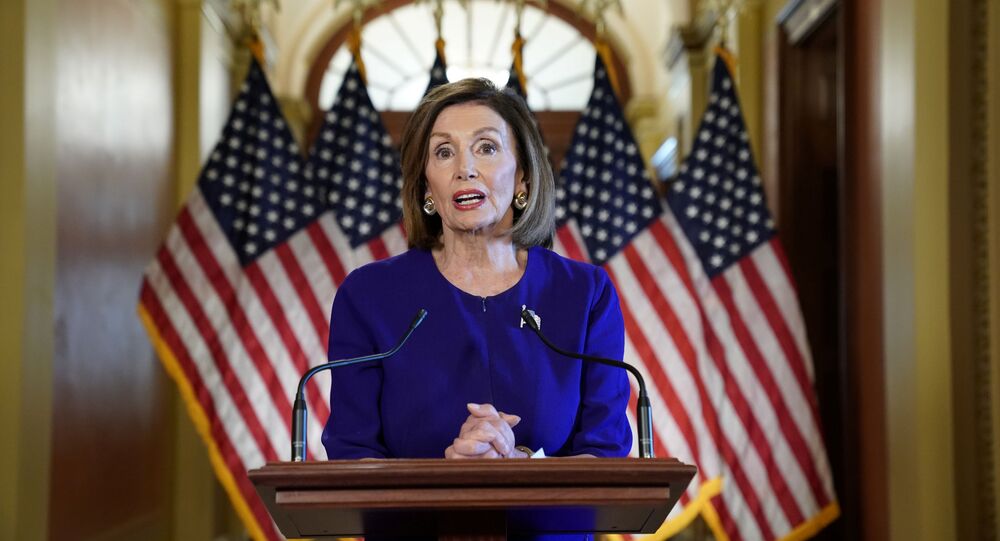 Although Democrats earlier blasted the Republicans for lobbying for the non-unanimously supported impeachment of former President Bill Clinton, now they are rooting for Trump's impeachment, supported by only one party, Rep. Steve Scalise pointed out.

Rep. Steve Scalise has posted a flashback clip pointing to the utmost hypocrisy showcased by House Democrats over the past 20 years. The clip shows House Speaker Nancy Pelosi finding fault with the "paralysed with hatred" Republicans calling for the impeachment of former President Bill Clinton, embroiled in the Monica Lewinsky scandal in 1998-1999.

Dems now:
- Trying to undo the 2016 election
- Have no bipartisan support
- Filled with hatred of @realDonaldTrump

Their hypocrisy is unbelievable. pic.twitter.com/uyN5iQSinT

The video recalled how Democrats had gone as far as accusing Republicans of attempting to reject and reverse the results of the national presidential vote that saw Clinton occupy the White House:

“They are telling us that our votes don’t count.”

To prove the point, Rep. Maxine Waters weighed in on the recorded debate opting to make assessments:

“They are driven by hatred,” Rep. Maxine Waters (D-CA) declared. “They hate Bill and Hillary Clinton so much, they will stop at nothing to bring him down.”

“We are here today because the Republicans in the House are paralyzed with hatred of President Clinton, and until the Republicans free themselves of hatred our country will suffer,” Pelosi uttered bombastically in the clip.

The flashback even features Joe Biden, who called Congress to be wary and on high alert, to make “darn sure” that they are impeaching based on “principle not politics."

The remarks appear to contradict the rhetoric that House Democrats have gone for now. Waters, for instance, recently thanked millennials for “staying woke” and supporting Democrats’ call to impeach Donald Trump:

“Shout out to all of the millennials for staying woke and supporting me all this time I’ve been warning Congress about Trump and why we needed to impeach him,” Waters wrote, adding emphatically:

“Remember what I’ve always said: If you fight, you can win!”

Scalise also paid particular attention to the earlier calls for “bipartisan impeachment”, while stressing that this time “Dems have no bipartisan support."

Schiff read a made-up transcript in a hearing.

This isn't a serious, fact-based process. It's a reckless scheme to attack @realDonaldTrump. pic.twitter.com/xyRItmwiXC

Meanwhile, the first calls for Trump’s impeachment, along with the formal proceedings to this end were initiated by House Speaker Pelosi, who was strictly against demonstrating “hatred” back in 1999.

Pelosi announced the official in-House impeachment inquiry against POTUS on Wednesday, arguing “the President must be held accountable as no one is above the law” amid a spat over Trump’s July call with Ukrainian counterpart Volodymyr Zelensky.

Per the released partial transcript, POTUS requested that the Ukrainian side oversee a thorough probe into the dealings of former Vice President and currently a Democratic presidential frontrunner Joe Biden and his son Hunter in Ukraine.

The content of the talk, referred to Zelensky as “normal” and "average"; he likewise said there was no perceived "pressure" during the call. That call was subjected to a very different interpretation by Democrats, who argue that Trump had requested that a foreign country interfere in the upcoming American national vote. President Trump blasted the open impeachment inquiry as a new round of "witch hunt garbage."

Meanwhile, Speaker Pelosi made it clear on Saturday that effectively pursuing Trump’s impeachment would be worth losing the Democrats’ House majority in 2020. During an interview at Tribune Fest, Pelosi argued that following Congress' mandate to hold the president accountable stands above politics.

"Heading into the next election cycle, do you have any anxiety at all about any of the stuff we're talking about...impacting your ability to hold control of the House in 2020?" Tribune CEO Evan Smith asked.

"It doesn’t matter," Pelosi responded. "Our first responsibility is to protect and defend the Constitution of the United States."

In the meantime, according to a Hill-HarrisX survey , Democrats currently enjoy a mere 5-point lead on a generic House ballot, which is substantially down from double digits last month.

Hand in Pelosi? FM Spokeswoman Trolls US House Speaker's 'Russia Did It' Remark on Trump Scandal