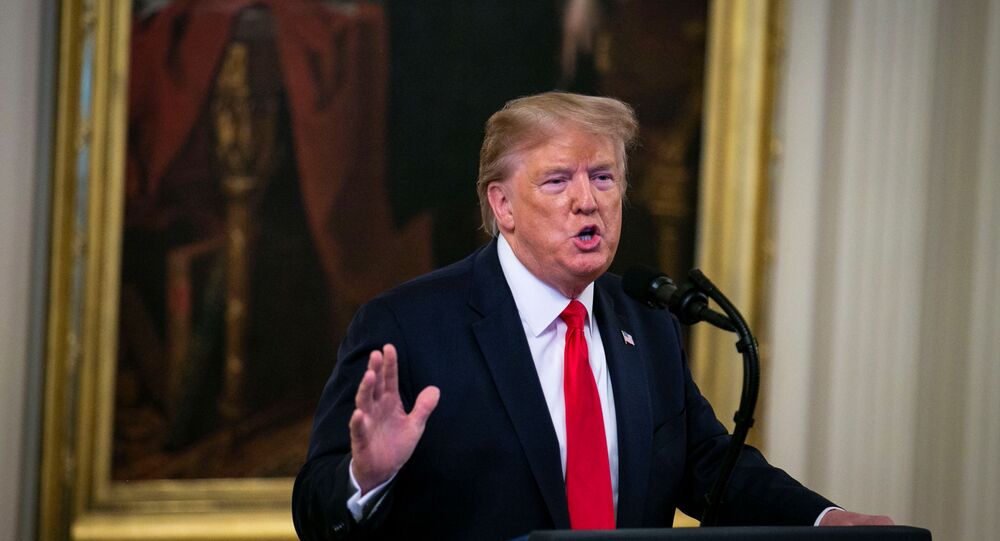 At the White House on Friday, US President Donald Trump addressed nearly a thousand Jewish leaders with Happy Jewish New Year wishes on the eve of Rosh Hashanah, adding to his holiday message that he did not want a war with Iran.

In an almost 13-minute speech, the US president asked those present to remember that in 2018 he ordered the relocation of the US Embassy in Israel from Tel Aviv to Jerusalem as well as his recognition, earlier this year, of the Golan Heights as Israeli territory.

“Our country is reminded of the infinite ways Jewish families uplift our nation [...] You embody the American dream", Trump stated, cited by The Times of Israel.

Touching upon the tense situation in Persian Gulf and in the Middle East, the US president said that he does not want to engage in a military conflict with Tehran.

According to the media report, Trump agreed with the sentiment to increase Holocaust education in American schools while taking questions from the audience.

Israel and Iran have had a fraught relationship, with Tel Aviv actively working to undermine Tehran's position in the region, including convincing other governments in the region to sanction the oil-rich Islamic republic.

Trump announced earlier this year a so-called deal of the century, which envisages, according to him, the end of the decades-long Israeli-Palestinian conflict. Palestinian leader Mahmoud Abbas rejected the proposed plan in its entirety.

Abbas told the UN General Assembly on Thursday that all agreements with Israel would be terminated if Israeli Prime Minister Benjamin Netanyahu goes forward with his latest re-election promise to seize additional territory in the West Bank.

Earlier, Rabbis from the Reform and Conservative Jewish movements agreed to participate in the White House’s annual High Holidays conference call, ending a two-year absence from the event, according to the Times of Israel.

The Reform and Conservative movements - the two largest Jewish denominations in the US - traditionally organize the annual call, which reportedly dates back to the Eisenhower administration, the media report said.

But they and the smaller Reconstructionist movement chose not to participate in 2017, shortly after Trump declared that there were “very fine people” on both sides of a conflict in Charlottesville, Virginia, that saw deadly violence and threatening racism by right-wing thugs, according to The Times of Israel.

Trump's High Holidays conference call comes amid heightened US-Iran tensions which have been simmering for the last several months in large part due to the president's unilateral withdrawal from the Joint Comprehensive Plan of Action (JCPOA), also known as the Iran nuclear deal, and reimposing tough economic sanctions against the Islamic republic.

Since unilaterally abandoning the landmark 2015 nuclear accord in 2018, the Pentagon has been gradually building up its military presence in the Persian Gulf, justifying its troop increases and weapons deployment by alleging that Iran is engaging in aggressive behavior in the Gulf of Oman and the Strait of Hormuz - a strategically important oil route in the Middle East. Tehran has consistently denied the accusations.