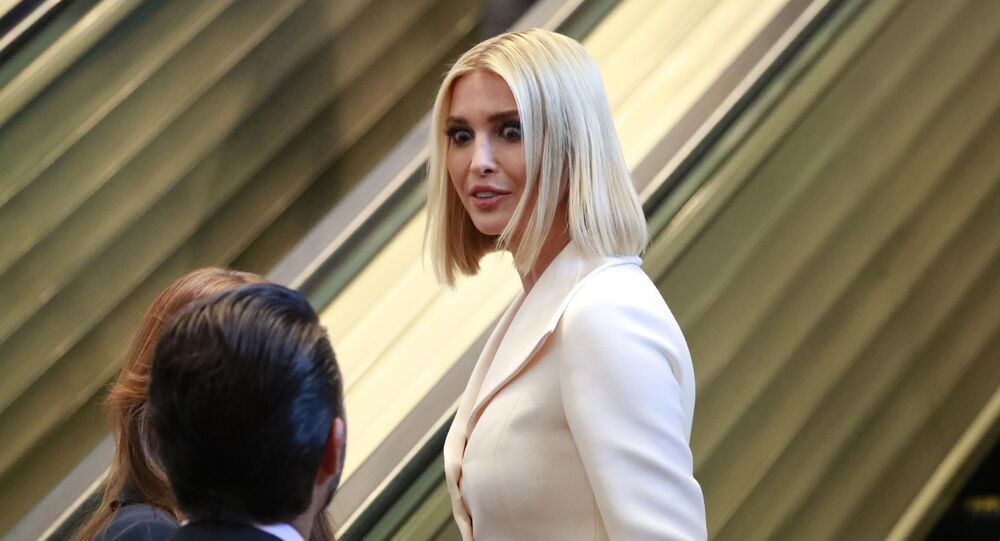 Ivanka Trump Dresses Smartly, but is No Stranger to Saucy Awkwardness as Dad POTUS Risks Impeachment

Although First Daughter Ivanka has not directly reacted to the impeachment inquiry launched this week against her father, apart from an ambiguous tweet on Tuesday reading “Thank you Mr. President”, her clothes perhaps speak louder than words, and so do nipples treacherously sticking out through a light silk blouse.

Whether a coincidence or not – especially given the gusto with which Ivanka Trump is promoting her female women empowerment project - her wardrobe this turbulent week paints the portrait of a stern and resilient character, with every single accessory, if any, sharpening the image of sheer willpower and authority.

On Thursday, she sat stoically through the whole of the UN General Assembly in New York, watching her embattled father speak and at some point putting her hand on husband Jared Kushner’s lap “like a robot programmed to show affection”, as the Daily Beast satirically put it. However, the choice of outfit, and especially the colour of it – a sterile white pantsuit – hardly denoted a daughter trying to overcome the nightmare of her father risking impeachment.

She appeared to be an embodiment of the leisure class, enjoying a worry-free life while standing no risk of being stained, much like when she returned the other day from a Roman holiday and, in particular, fashion designer Misha Nonoo’s star-studded wedding and put on a smart A-line Prada skirt, albeit adorned with a slightly flippant floral 3D applique work – something that made her stand out from ardent White House dress protocol followers.

Another small detail couldn’t escape the attention of poky observers – her nipples slightly sticking out through the delicate blue button-up blouse. A signal of a body temperature below normal, or a state of utmost agitation? Or both?

Last Wednesday, however, Ivanka’s pick of clothes was arguably no less suggestive, as the presidential aide appeared in public again in Prada, just a short time after her father’s controversial call with his Ukrainian counterpart Volodymyr Zelensky was revealed.

The polka dot frock, keeping up the aesthetics of the decadent ‘80s, cost $3,300, with the gold-button detailing at the bust potentially hinting at the inner self-assuredness, and, to say the least shielding the wearer from any sticking details.

Whatever the language of fashion, one should perhaps not judge a book by its cover, as time will show how exactly Ivanka sees the Trump impeachment inquiry.

Formal proceedings were launched earlier this week by House Speaker Nancy Pelosi after it was revealed that Trump could have breached constitutional responsibilities as a result of his July call with Ukrainian President Volodymyr Zelensky. In it, as suggested by the published partial transcript, POTUS asked Ukrainian authorities to make sure a thorough probe is launched into the potentially illegal and ethically incorrect dealings of Joe Biden, a current Dem presidential candidate, and his son Hunter in Ukraine back in 2016.