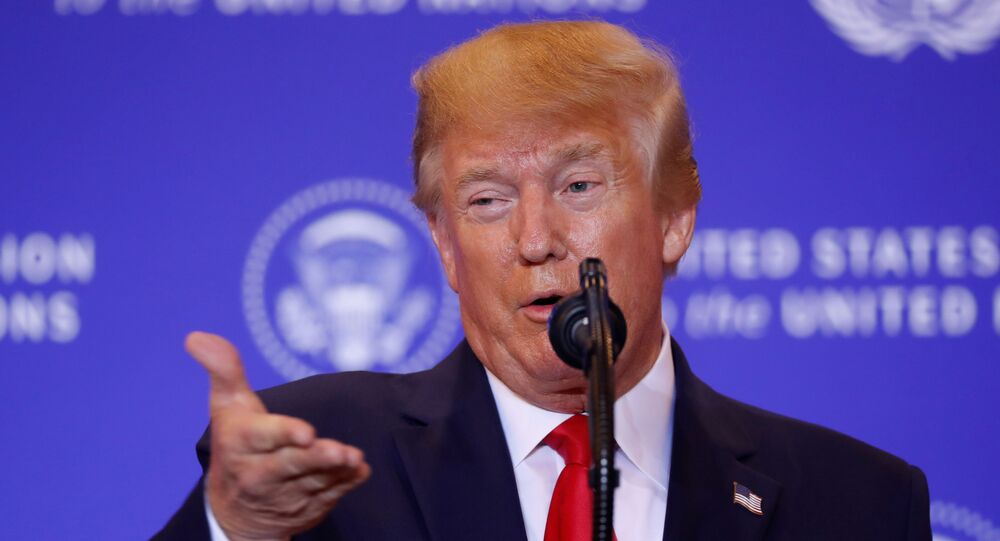 The complaint, filed by a whistleblower in August 2019, has fuelled recent efforts by the House Democrats to impeach President Donald Trump over allegedly illegal demands made in talks with his Ukrainian counterpart.

The US Congress’ House Intelligence Committee has released a redacted version of the whistleblower complaint over alleged abuse of power by President Donald Trump in a telephone conversation with Ukrainian President Volodymyr Zelensky. The complaint was earlier provided to the committee by the Office of the Director of National Intelligence.

The author of the complaint, whose identity hasn't been revealed yet, claims that he indirectly obtained knowledge from other US government officials about Trump allegedly soliciting "interference from a foreign country in the 2020 US election". The whistleblower claims that the "interference" would have been achieved by means of prosecuting one of Trump's primary "domestic political rivals" with the help of his personal lawyer, Rudolph Giuliani. The author of the complaint also said that Attorney General Barr "appears to be involved" in this effort too.

© Photo
Screenshot of the whistleblower's complaint on Trump-Zelensky call

The whistleblower indicates in his complaint that he was not "a direct witness" of the events he was reporting, but he called the accounts of over six US officials, on which the paper is based, "credible".

The anonymous author of the complaint stated that several White House officials, whom the whistleblower doesn't name, told him that after a brief exchange of pleasantries with Ukrainian President Volodymyr Zelensky, Trump used the "remainder of the call" to "advance his personal interests".

Elaborating on his claims, the whistleblower stated that Trump had "pressured" Zelensky into commencing or continuing an investigation into the activities of Joseph Biden, one of the frontrunners to become the Democratic presidential nominee in the 2020 election, and his son Hunter. The complaint's author also said that POTUS had allegedly pressured his Ukrainian counterpart into assisting in uncovering information that could prove that purported interference in the 2016 presidential election had "originated in Ukraine".

The full transcript of the talk between the two presidents, which was released on 25 September, revealed that Joseph Biden’s name came up only once throughout the entire conversation. Specifically, Trump expressed concern that Biden had bragged about stopping a certain prosecution process in Ukraine, purportedly against his son, during his days as vice president. POTUS asked Zelensky if he could look into these claims.

According to the transcript, Trump also asked his Ukrainian counterpart whether he could "do us a favour" and allow Ukrainian officials to cooperate with the US attorney general in an investigation into the activities of the company Crowdstrike. The latter was previously hired to investigate the hack of the Democratic National Committee's server, located in Ukraine, which took place during the 2016 election.

President Donald Trump has reacted to the publication, accusing the Democratic Party of trying to "destroy" their Republican opponents and thereby endangering the whole country.

THE DEMOCRATS ARE TRYING TO DESTROY THE REPUBLICAN PARTY AND ALL THAT IT STANDS FOR. STICK TOGETHER, PLAY THEIR GAME, AND FIGHT HARD REPUBLICANS. OUR COUNTRY IS AT STAKE!

A White House spokesperson, in turn, assured that "nothing has changed" following the release of the whistleblower's complaint by the House Intelligence Committee, since it's merely "a collection of third-hand accounts of events and cobbled-together press clippings".

"The White House will continue to push back on the hysteria and false narratives being peddled by Democrats and many in the main stream media", the spokesperson said.

The whistleblower's complaint sparked a new wave of accusations against Trump of alleged abuse of power and triggered the start of formal impeachment proceedings, which had previously been stalled by the efforts top Democrats such as House Speaker Nancy Pelosi. The latter accused POTUS of undermining "the integrity of [US] elections, the dignity of the office he holds and [US] national security".