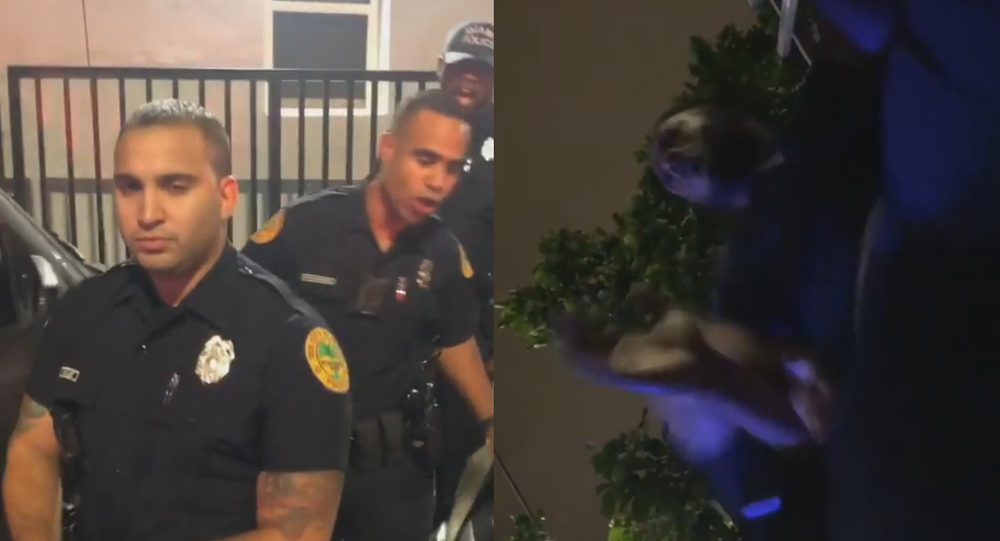 A Miami, Florida, man is accusing a trio of area police officers of abusing their power and assaulting him outside of his residence following a tense encounter that was partially recorded on his cellphone.

Emanuel David Williams, a local Miami musician, has been slapped with misdemeanor charges of disorderly conduct and resisting an officer without violence following a heated interaction with officers from the Miami Police Department (MPD) early Saturday morning.

MPD Officers Hernandez and Allen - identified by their name tags in the first clip - appeared to be okay with the recording and could even be overheard saying “that’s fine” multiple times. However, Gonzales, the third officer who approached Williams, threatened the civilian once the camera was focused on his face.

“Sir if you put that phone in my face again, we’re going to have a problem. Take that phone away from my face,” Gonzales said, seconds after he himself moved closer to Williams.

Things quickly became tense once the Miami resident asked the officers what the issue was with him recording their interaction. Gonzales refused to answer and is seen in the clip shifting his jaw from side-to-side.

Last night I was assaulted by 3 #miami police officers in front of my own home. . #policebrutality #blacklivesmatter #miamilawyers #miamilaw #lawsuit

Gonzales then ordered Williams to walk across the street, and one of the officers can be overheard counting down, despite the civilian complying with the “lawful order,” as Hernandez forcefully termed it.

Within seconds of Williams getting to the sidewalk, Gonzales approached him and escalated the situation, simultaneously knocking the phone out of his hand and shouting, “Do not put the phone in my face again, do you understand?”

These thugs knocked my phone out of my hand threw me to the ground and punched me repeatedly in the head. . . #policebrutality #blacklivesmatter #miamilawyers #miamilaw #lawsuit

“Oh my God,” the Miami man said before he was thrown to the ground and handcuffed.

According to a September 22 post on Williams’ Instagram page, officers repeatedly punched him in the head after throwing him to the ground. He claimed he did not resist arrest.

"I was shocked my phone even picked up the part after they knocked it out of my hand," Williams, who has since made bond, told the Miami New Times. "I only got my phone back after I got out of jail. I didn't think my phone caught all that."

According to the arrest report obtained by the local outlet, Williams’ ex-girlfriend called police to assist in obtaining items from his residence.

While the authorities did not say the man was physically aggressive or violent, Gonzales claimed that the camera was in his face, but did not mention that he first approached the camera pointed in his direction before taking action.

Though he did say “Do not put the phone in my face again, do you understand?” in the clip, it remains unclear when or if Gonzales specifically told Williams he was under arrest, as he claimed.

"They had their way with me," Williams claimed to the Miami New Times. "There was nothing I could have done. If I had reacted at all or fought back, I could be sitting in a cell or have been shot dead. The only thing I could do to stay alive was let it happen."

US Abortion Rate Drops to Lowest Level Since 1973 Legalization