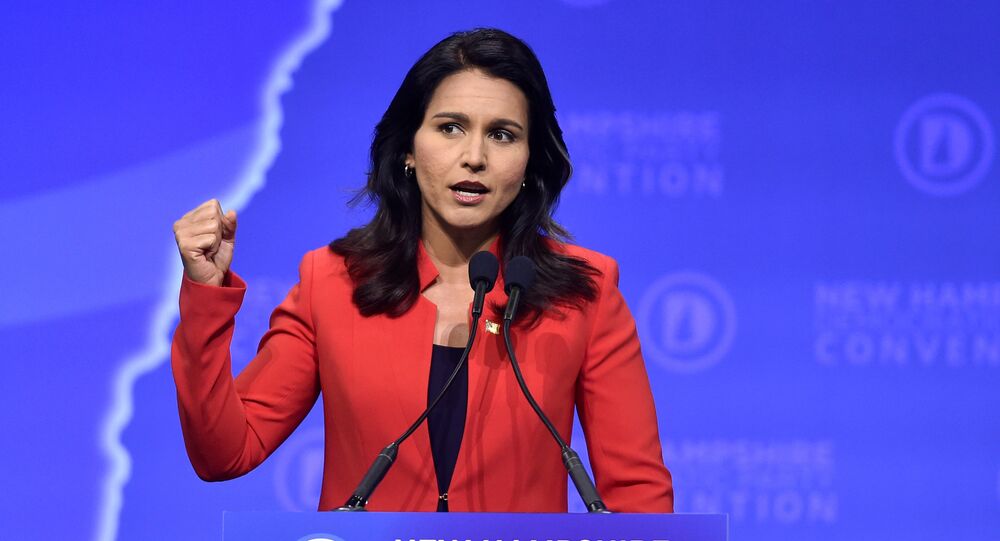 Hawaii Rep. Tulsi Gabbard, one of the few Democratic candidates to oppose impeaching US President Donald Trump, has qualified for her party’s next primary debate in October.

When the Monmouth University poll of New Hampshire results were announced on Saturday showing Gabbard with 2% support in a fourth national or early-state poll, the Hawaii Democrat won the right to join the Democratic debates on October 15-16 in Westerville, Ohio. Gabbard becomes the 12th candidate to qualify, meaning like earlier debates, this one may be split up into two nights, Vox reported.

The other qualifier Gabbard needed to meet was having a minimum of 130,000 unique donors to her campaign, including at least 400 individual donors in at least 20 states, FiveThirtyEight noted.

However, almost uniquely among her Democratic competitors, Gabbard opposes her party’s moves to impeach Trump.

"I don’t [support impeachment]," Gabbard told “Full Court Press with Greta Van Susteren” earlier this month. "You know, I think it’s important for us to think about what is in the best interest of the country and the American people, and continuing to pursue impeachment is something that I think will only further to tear our country apart."

"Make no bones about it: We need to defeat Donald Trump. But I think it’s important for our country’s sake and our future that the voters in this country are the ones who do that, and I believe that we will," she added, according to The Hill.

She echoed that sentiment on “Fox & Friends” Tuesday, telling host Brian Kilmeade, "I believe that impeachment at this juncture would be terribly divisive for the country at a time when we are already extremely divided. The hyperpartisanship is one of the main things driving our country apart.”

The stance sharply differentiates her from others, including Senators Kamala Harris of California and Elizabeth Warren of Massachusetts, who fully support bringing criminal charges against Trump.

The House must impeach. It must start today.

​House Democrats moved on Tuesday to form a committee of inquiry for impeachment proceedings concerning Trump’s blocking of the House Intelligence Committee from viewing a whistleblower report from last month concerning a July phone call between him and Ukrainian President Volodymyr Zelenskyy, Sputnik reported.

Gabbard has long been the hornet’s nest in any room of Democrats for her staunchly anti-war positions. She has drawn particular ire for her January 2017 meeting with Syrian President Bashar al-Assad during a visit to that country. She has also aroused anger among progressives for her past opposition to marriage equality, although in recent years her position has changed and the LGBTQ rights advocacy group Human Rights Campaign rates her voting record favorably.

Tom Steyer, a billionaire hedge fund manager, has also recently qualified for the debate, which is hosted by CNN and The New York Times, and spiritualist author Marianne Williamson might soon as well.