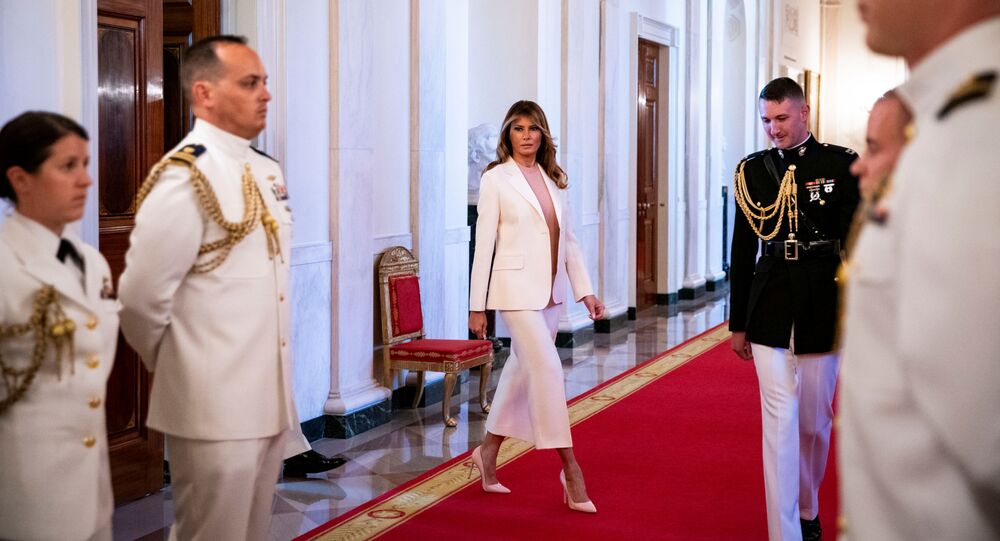 First Lady Melania is not new to stunned glances cast in her direction over an impeccable choice of clothes and accessories, but now she is ready to surprise with something different - a knack for interior design, as well as a genuine interest in history.

Mum-of-one Melania Trump will showcase a few new touches that she initiated on the White House's premises for the second state dinner during Trump’s presidency slated for this Friday.

Among the changes she has overseen since she first arrived at 1600 Pennsylvania Avenue is refreshed wall fabric in the Green Room, as well as renovated furniture in the Blue Room, while most of the changes were long overdue, according to the Jacqueline Kennedy-founded non-profit White House Historical Association, cited by AP.

In the Red Room, the issues that occurred over time were even more obvious, since the walls there almost changed their original colour as sunlight streaming into the room had left some of the wall fabric "faded" to "almost pink", per Stewart McLaurin, head of the WHHA, which helps finance initiatives to fix the ageing historic building.

Among other new touches to the interior are a new rug sewn for the Diplomatic Reception room, the main entrance off the South Lawn, as the old one was worn out, per McLaurin, who added the border of the replacement shows the flowers of the 50 states, as designed by the first lady.

McLaurin, meanwhile, added that with refreshed draperies in the Green Room, for instance, the material from the back was transferred to the front, thereby eliminating the costly necessity to replace the curtains altogether.

The slightly refurbished and refreshed public rooms will open their doors to Australian Prime Minister Scott Morrison and his wife, Jenny and guests for a three-course meal on Friday.

Beautiful Saturday on the South Lawn of the @WhiteHouse. Members of the military are rehearsing for Friday’s State Visit with Australia. Thank you to all who serve our great nation! pic.twitter.com/ZNpTFk72If

The first lady, who is known to keep a rather low profile standing beside her flamboyant husband, assumed the role of a caretaker after the couple move into the White House in early 2017, with the FLOTUS embarking on several renovation projects.

"Our family is grateful to live in this true symbol of our nation’s history, but we are even more honoured to play a part in restoring and enhancing our country’s sacred landmark", FLOTUS said at a May reception.

Mrs Trump's looks and conduct constantly hit media headlines: for instance last night, her "friendly" kiss with Justin Trudeau went viral after it was brought up by the Canadian prime minister’s mother.

First Lady Melania Trump stunned onlookers once again with her elegance and poise during the recent “Medal of Freedom” ceremony. Check it out! https://t.co/Sr7vM5582m

As a slim dress-clad Melania’s dramatic facial expression was captured on camera, the politician’s mother lauded the picture as "cute" implying that despite the readable passion on FLOTUS’ face, the gesture was intended as an amiable peck on the cheek.