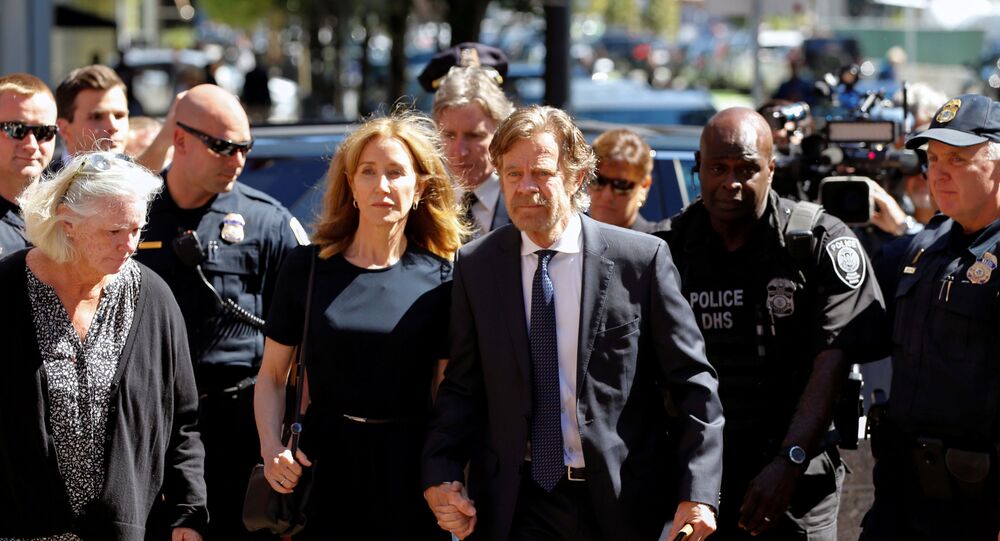 Oscar-nominated actress and former "Desperate Housewives" star Felicity Huffman has been sentenced to 14 days behind bars for her personal role in the largest known college admissions scandal in US history.

On Friday, a federal judge in Boston ordered Huffman serve two weeks in prison, perform 250 hours of community service, pay a $30,000 fine and serve a year of supervised release. Huffman was ordered to self-report to law enforcement officials on October 25.

“I take full responsibility for my actions ... I am prepared to accept whatever sentence you deem fit," Huffman said prior to her sentencing.

Back in May, the 56-year-old actress pleaded guilty to a charge of conspiracy to commit mail fraud and admitted to paying a fraudulent non-profit charity $15,000 to have her daughter's SAT exam scores altered to boost her chances of getting accepted into some of the country's top colleges and universities.

According to prosecutors, William "Rick" Singer, billed as the "CEO and Master Coach of the world's largest private Life Coaching and College Counseling Company, The Key" on his company website, accepted the cash from Huffman and other public figures, such as fashion designer Mossimo Giannulli and his wife, "Fuller House" star Lori Loughlin, who has raised eyebrows for her "not guilty" plea in the case.

Singer confessed to federal prosecutors back in March that he had accepted some $25 million in funds from elite, wealthy families.

"All of these things, and many more things, I did," Singer admitted in court. "I created a side door that would guarantee families would get in."

Around 40 families have been tied up in the case.

William H. Macy, Huffman's husband, is believed to have had no knowledge of his wife's doings and wrote a letter to Boston Judge Indira Talwani that pleaded for leniency, as “Felicity has borne the brunt of this."

Huffman also penned her own letter to the judge and asserted that she got involved with Singer because both of her daughters have learning disabilities. She also appeared to suggest that one daughter was at a disadvantage because she went to a "very underfunded" public high school.

“I find Motherhood bewildering. From the moment, my children were born I worried that they got me as a Mother. I so desperately wanted to do it right and was so deathly afraid of doing it wrong," the actress claimed in her note.

Huffman says her daughter asked her “Why did you do it? Why didn’t you believe in me?”

“I have inflicted more damage than I could’ve ever imagined.” #FelicityHuffman #WCVB