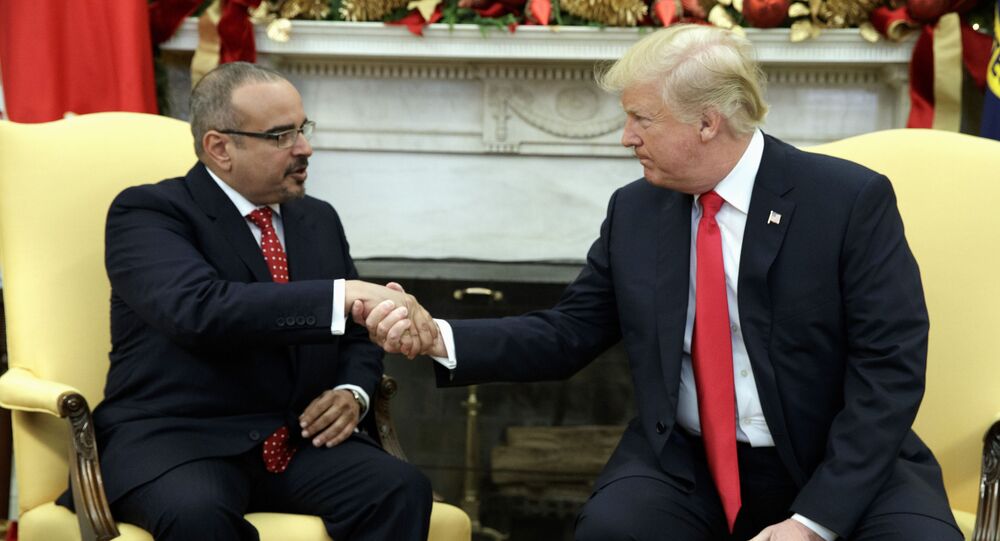 WASHINGTON (Sputnik) - US President Donald Trump will welcome Bahrain's Crown Prince Salman bin Hamad Al-Khalifa to the White House on Monday for talks on maritime security and the "threat" posed by Iran, the White House said in a statement.

"President Donald J. Trump will welcome His Royal Highness Prince Salman bin Hamad Al-Khalifa ... to the White House on September 16, 2019", the statement said on Thursday. "The two leaders are expected to discuss maritime security, countering the threat from Iran, efforts to promote peace in the region, and counterterrorism".

The upcoming visit will strengthen the strategic partnership between the United States and Bahrain, the White House said. The two countries are committed to expanding the bilateral economy and security cooperation, it added.

The United States and Bahrain have an extensive military partnership. Bahrain hosts a US Navy base, US Naval Forces Central Command, and the US Fifth Fleet. In August, US contractor Raytheon said that Bahrain had agreed to buy Patriot anti-aircraft and missile interceptor system.

In July, Bahrain’s Foreign Ministry slammed Iran for seizing a UK-flagged oil tanker and demanded that it stop threatening navigation in the region. the Iranian authorities seized a UK-flagged tanker in the Strait of Hormuz prompting sharp criticism from the White House. Trump even called on allies to establish a maritime coalition to protect vessels passing through Hormuz.

Tensions have escalated in the Persian Gulf over the past several months due to the standoff between the United States and Iran. A series of attacks on oil tankers in the Gulf of Oman and the Hormuz Strait has worsened the situation, with Washington and its allies blaming Iran and Tehran denying all accusations.

Washington and Tehran have been at odds for the last year. In May, Trump withdrew from the Joint Comprehensive Plan of Action (JCPOA) on Iran's nuclear program and reimposed sanctions against Tehran. In turn, Tehran said it would begin reducing its commitments under the JCPOA after 60 days unless the Western signatories took steps to offset the impact of the US sanctions. The Islamic Republic subsequently began scaling back its obligations under the accord every 60 days.

The JCPOA signed in 2015 by Iran, China, France, Germany, Russia, the United Kingdom, the United States, Germany and the European Union, required Iran to scale back its nuclear program and severely downgrade its uranium reserves in exchange for sanctions relief.

Bahrain to Purchase US Patriot System to Defend Against Aircraft, Missiles - Raytheon