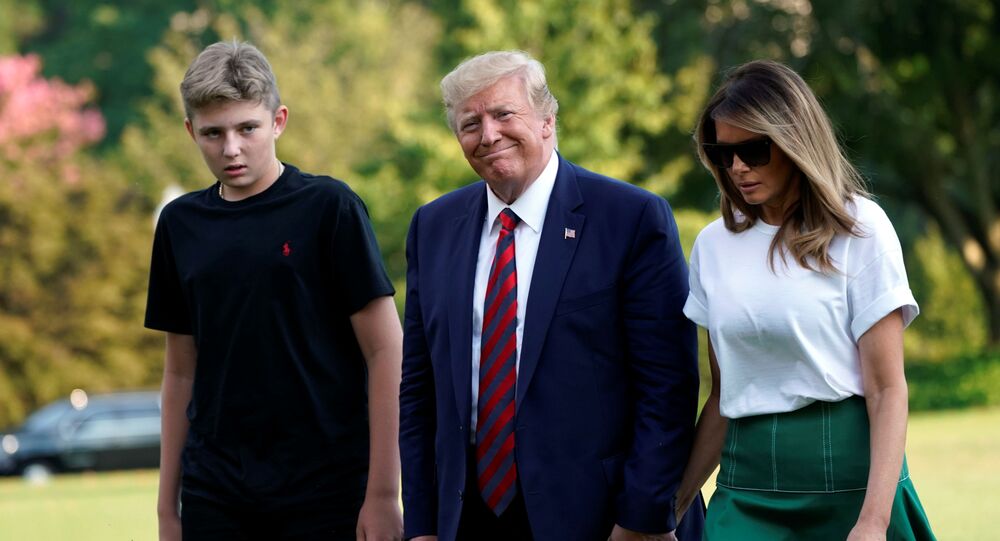 Social media users are once again accusing US President Donald Trump of being a bad father following an odd reference to his own son during an anti-vaping speech in the Oval Office.

Trump, alongside US Secretary of Health and Human Services Alex Azar II and acting Food and Drug Administration Commissioner Norman Sharpless, announced Wednesday that his administration is moving to ban flavored electronic cigarettes and vape juices.

In an effort to bring the First Lady of the US Melania Trump into the conversation, the US president appeared to stumble and mentioned his son Barron in an odd way.

“We can’t allow people get sick, and we can’t have our youth be so affected… and that’s how the first lady got involved. She’s got a son, together, that is a beautiful young man, and she feels very, very strongly about it,” he said during his Oval Office presser.

Trump indicates that his drive against vaping came at the behest of Melania. He then describes his son Barron in a very odd way.

"That's how the First Lady involved. She's got a son -- together -- that's a beautiful young man, & she feels very very strongly about it." pic.twitter.com/s5wNzUCSmj

Naturally, many netizens took the verbal flub as an opportunity to go in on the president.

He forgot Barron was his son too. Terrible. Welcome to the Tiffany and Eric club, Barron.

He could be excused for not thinking Barron is his son considering how little time they seem to spend together.

"She's got a son"? WTAF who talks about their own kid this way?

Y'all replaced Barack Obama with this.

Taking a moment to point out he's distancing himself from his own son and he can barely. Frigging. TALK.#NeverForget. This is who we've got.

Because he had nothing to do with him?

She has a son.

Who is the father? 😂

Trump’s comments come less than two weeks after former Director of Oval Office Operations at the White House Madeleine Westerhout said that she was closer to the US president than his own daughters, Ivanka and Tiffany Trump.

However, the real bombshell from Westerhout prior to her removal from the White House was her claim that Trump did not like being photographed with Tiffany because he felt that she was “overweight,” according to Politico.

While Madeleine Westerhout has a fully enforceable confidentiality agreement, she is a very good person and I don’t think there would ever be reason to use it. She called me yesterday to apologize, had a bad night. I fully understood and forgave her! I love Tiffany, doing great!

Despite Westerhout’s claims, Trump did not have much to say about Tiffany other than that he loves her. Following the debacle, Tiffany posted a quote by the 13th century poet Rumi to her Instagram story which read: “Study me as much as you like, you will not know me, for I differ in a hundred ways from what you see me to be. Put yourself behind my eyes and see me as I see myself, for I have chosen to dwell in a place you cannot see.”