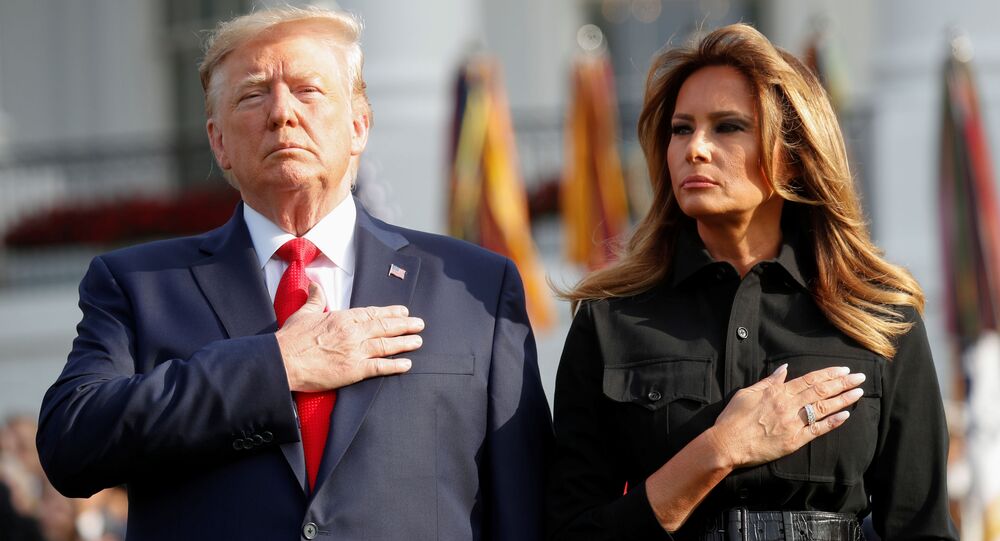 WASHINGTON (Sputnik) – President Donald Trump and First Lady Melania participated in a moment of silence on the White House lawn on Wednesday at 8:46 a.m., the exact moment when American Airlines Flight 11 struck the North Tower of the World Trade Center on 11 September 2001.

Trump and Melania walked out onto the South Lawn of the White House at 8:46 a.m. and clasped hands during the moment of silence. A bell chimed three times at 8:47 a.m.

The Trumps were joined by several of the victims' families, survivors and law enforcement officials.

Following the moment of silence, the president and first lady departed the White House to attend a ceremony and memorial service at the Pentagon commemorating the victims of the attacks.

US Has to Ensure Counterterror Resources Applied Correctly

"We have got to make sure we apply US resources appropriately to address the threat of terror", Secretary of State Mike Pompeo said in a tweet, commemorating 18th anniversary of September 11, 2001 terrorist attacks.

The top US diplomat noted that those events still haunt him today.

9/11 still haunts me. Almost 20 years later, I still reflect on that day & I’m resolved that we’ve got to get counterterrorism right. @realDonaldTrump recognizes this too. We have got to make sure we apply U.S. resources appropriately to address the threat of terror. #NeverForget pic.twitter.com/gL95bJ7Gwt

​On 11 September 2001, terrorists from Al-Qaeda* seized four passenger planes, crashing two of them into the World Trade Center in New York and another into the Pentagon. The fourth jet came down in a field in Pennsylvania after initially being directed toward Washington. Some 3,000 people from 90 countries lost their lives in the terrorist attacks.